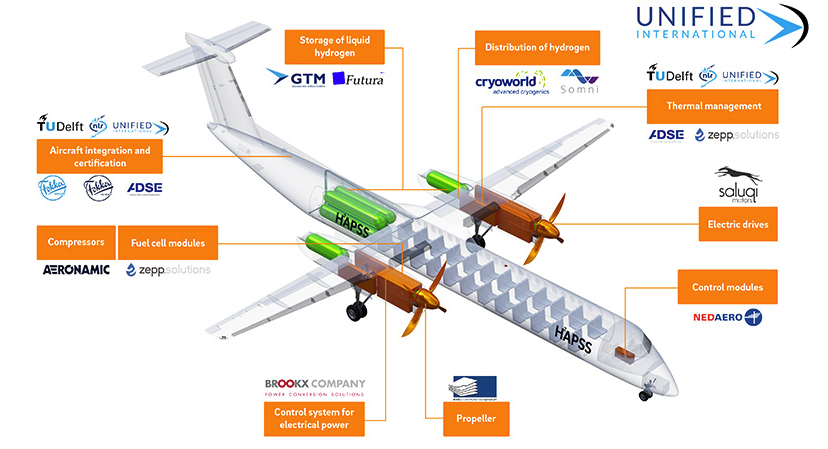 Seventeen Dutch companies and organizations have set up a partnership to develop a complete zero-emission drivetrain replacement for traditional propeller airplanes for the short-haul, based on electric motors fueled by fuel cells and hydrogen. They want to become a tier-one supplier of their HAPSS system to retrofit existing turboprop airplanes up to 40 to 80 seats.

Aiming to make flying from Rotterdam to London commercially viable by 2028 sets off the Dutch in pursuit of pioneers like British-American start-up ZeroAviation. They are already targeting a 10 to 20 seats commercial plane on hydrogen by 2024, and an 80-seater by 2026. Major airplane builders like Airbus focus on long-haul planes on hydrogen by 2035.

These include former airplane builder Fokker, Zepp Solutions, Saluqi, Technical University Delft, the Dutch government, and the Royal Dutch Aerospace Center, among others. The government steps in with the Aviation in Transition initiative, of which the HAPSS project is the major component, receiving €383 million from the National Growth Fund.

Is the Netherlands taking the lead again?

In a bold statement, the initiators announce the Netherlands “to take the lead again in aviation: the Netherlands has 100 years of experience in aviation. But with the demise of Fokker as an OEM in 1996, the demand for Dutch-made aircraft components came to an end”.

“In the meantime, the ecosystem has only been used for aircraft platforms such as Airbus, Boeing, and Lockheed Martin (F35). This is now going to change. With the HAPSS project, the Netherlands is positioning itself worldwide as a supplier for airlines that need to start flying sustainably. Potential customers include Airbus, Boeing, Embraer, and De Havilland.”

Technically few details are given about the HAPSS system. The idea is to replace the classic combustion turboprop engines with electric ones that get their power from fuel cell systems positioned in the engine bays behind the motor and propellers. Instead of storing kerosine in the plane’s wings, the liquid hydrogen tanks are placed in the tail.

To have hydrogen stored as a liquid, it has to be cooled to minus 253 degrees Celcius and transported with special piping to the fuel cells, where electricity is made in contact with oxygen in the air, and water vapor is the only emission.

“It sounds easier than it is; the piping, for example, is also a complex matter,” says Bert Klarus of InnovationQuarter. “If you want to transport hydrogen through pipes, you must keep it under control with pressure regulators and compressors. And there is also a lot of heat released, you have to do something with that too.”

These so-called cryogenic liquid hydrogen storage tanks consist of an inner and outer casing with a vacuum in between and are a challenge as such. These tanks have been used for several years in different industries, including aerospace.

Airbus, which is working on its development, says there are significant differences. Hydrogen storage tanks for commercial aircraft would have to endure approximately 20 000 take-offs and landings and would need to keep the hydrogen in the liquid state for much longer.

Another challenge is the fuel cell operating at different altitudes. In a thesis, TU Delft points out that the ideal cruising altitude for fuel cell aircraft is an intermediate altitude because the fuel cell powertrain performance decreases at increasing altitude.

This is one of the reasons the fuel-cell-powered solution is only suitable for replacing mid-sized turboprop airplanes that fly at lower altitudes for short-haul flights. Airbus instead focuses on burning hydrogen in jet engines for long-haul flights.

Airbus says it’s not too difficult to adapt the jet engines for burning hydrogen instead of kerosene. It’s a technique that has been used for years in rocket engines and satellites. But you need vast amounts of hydrogen for high-altitude long-haul flights, and in the combustion process, nitrogen (NOx) emissions are still produced.

Meanwhile, the Dutch consortium has to face competition within the borders of its own country. British-American start-up ZeroAvia signed an agreement with Dutch aviation partners in October last year to realize a zero-emission one-hour flight route with a 19-seat airplane on hydrogen between London and The Hague Airport (RTHA) in Rotterdam.

Targeted for 2024, this would probably be one of the world’s first commercial international routes with hydrogen planes. ZeroAvia recently established a legal entity in the Netherlands to avoid limitations due to Brexit and to have an EU foothold to enable commercialization and partnerships with airports, airlines, and parts manufacturers. But the Dutch HAPSS consortium sees companies like these rather as potential clients than competitors.

ZeroAvia is currently developing a 19-seater twin-engined airplane for short-haul flights, capable of covering a range of 500 nautical miles or 916 km. ZeroAvia was the first to feature a six-seater H2-powered electric airplane passenger flight in September 2020.

The British-American start-up acquired two twin-engine 19-seat Dornier 228 aircraft from Guernsey’s regional airline Aurigny and AMC Aviation, which used the planes on regional services. They will be converted with fuel cell-powered engines and will be used to certify them as the most extensive aviation hydrogen platform yet, to be commercially used from 2024.

ZeroAvia’s ambitions go further than the 19-seater for regional flights too. It raised another $13 million (€10,9 million) from a series of venture capitalists to start up a 50- to 80-seater project to be realized in 2026.

It also announced the start of developing a 76-seat airplane with hydrogen propulsion together with Alaska Air Group, the parent company of Alaska Airlines. ZeroAvia will incorporate a 3MW+ hydrogen-electric powertrain system into a De Havilland DHC-8-400 (Q400) aircraft, which would enable a range of 500 nm (926 km).