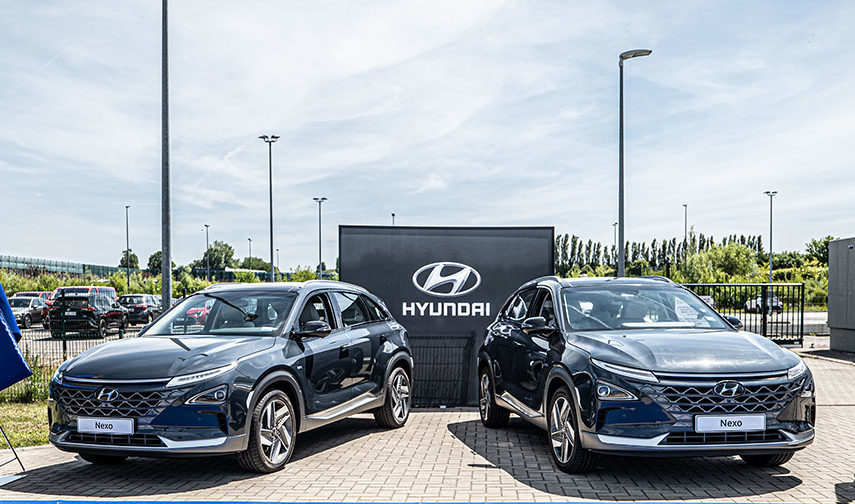 With ten extra Hyundai Nexos, the zero-emission fleet of official cars for the European Parliament in Brussels is doubled /Hyundai Belux

On Tuesday, Hyundai Belux officially delivered ten units of its hydrogen-driven Nexo to the European Parliament’s professional drivers. Within the framework of the EU Research and Technology Development Project, there is already a fleet of ten Nexos operational since May last year. That fleet is now doubled.

MP’s can use the hydrogen cars when they need to attend official affairs, and the vehicles are also used to transport official invitees of the Protocol Service of the Parliament. According to the press release, the EU Parliament supports hydrogen technology as being crucial in the ongoing transition to a zero-emission car fleet in passenger cars and (future) trucks.

“The development of infrastructure for green hydrogen is essential not only to keep driving our fleet of twenty hydrogen cars but also to facilitate a broader market penetration of this promising technology.”

Belgium now counts four hydrogen stations. CMB runs one in Antwerp, Colruyt-daughter DATS24 has two stations operational and three more planned, and there’s the one in Zaventem from Liquid Air, which was the only one for years publicly accessible.

DATS24 opened a second unit in Wilrijk in May of this year. The forecourt lies along the busy lanes of the A12 and not far from the city of Antwerp, where garbage trucks drive on the emission-free fuel carrier.

What sets the stations from DATS24 apart is offering hydrogen produced from renewables, better known as green hydrogen. The grey variant, extracted from natural gas and available in Zaventem, doesn’t result in significant greenhouse gas advantages because of CO2 emitted during production.

DATS24 is partnering with Hyundai, Toyota, WaterstofNet, and ALD Automotive for the project. Construction of the station took a cost of 2 million euros, but it is part of a much larger investment plan by Colruyt into hydrogen, while Europe provides funding as well.

With Fluxys, the supermarket group is constructing a hydrogen plant in Zeebrugge, and with VoltH2, another one is planned in Terneuzen, the Netherlands. For nationwide coverage, 25 stations are needed in Belgium.

In September 2021, Hyundai Motor Group presented its ‘Hydrogen Vision 2040’. The strategic plan of the Korean company envisages offering a fuel cell version for all commercial vehicle models of the group by 2028. However, it will still take a few years before the costs drop to the BEV level.

Hyundai plans to introduce a next-generation fuel cell system in 2023, which will be used as the successor of the Nexo FCEV SUV and a “hydrogen-powered multi-purpose vehicle (MPV)”. This will likely be an H2 version of the brand new Staria van.

The new system comes available in two variants with 100 and 200 kW. The 100 kW version is up to 70% smaller than the FC system from the current Nexo. This means it can be used not only in a large SUV but also in smaller vehicles. On the other hand, the 200 kW version is about the same size as the current Nexo system but offers almost double power.

By 2030, there should be another new fuel cell development generation. The prices of fuel cell vehicles are then to be reduced to the level of battery-electric vehicles. This applies not only to passenger cars but also to commercial vehicles.

As Hyundai announced, all new models such as buses and heavy trucks will be offered as fuel cell and battery electric vehicles for the global market. A fuel cell version of all commercial vehicle models will be available by 2028.