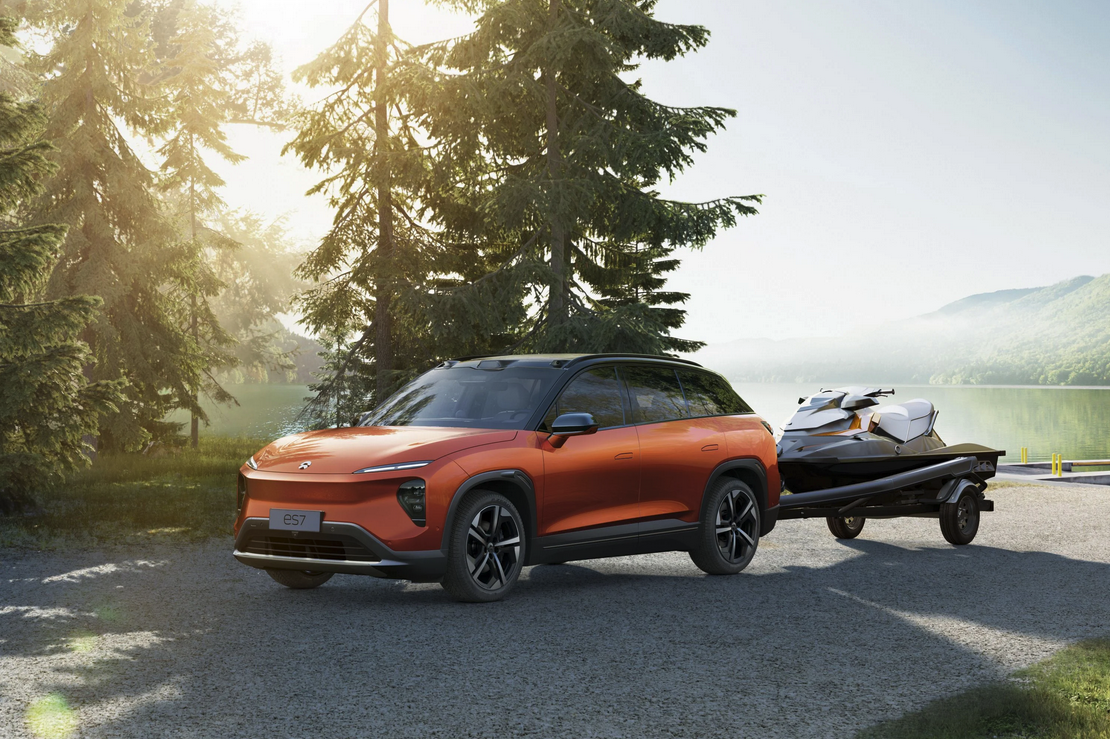 Chinese premium EV maker NIO has unveiled its newest ‘mid-large’ SUV, the ES7, a five-seater nearly five meters long that it sees as an answer to the upcoming long-wheel-based BMW X5. Like all NIOs, it features swappable battery packs of 75 kW, 100 kW, and an ‘Ultralong Range Battery’ offering up to 850 km range.

NIO executives confirmed at a live stream user event on Thursday that it plans to build a factory for its semi-automatic battery swapping stations and charging piles in Hungary. The new CEO is already hired. In November last year, It signed a strategic partnership with Shell to collaborate on charging and battery swapping facilities in China and Europe.

The ES7 fits in the model range between the ES6 and ES8. The latter was the first NIO to land in Europe via Norway. Like the ET7 sedan, the SUV is based on the new NT2.0 platform and inherits most of the sedan’s technology.

That means it features an electric all-wheel drivetrain of 480 kW (180 kW front, 300 kW rear) and 850 Nm torque. Despite being an SUV, it accelerates from 0 to 100 km/hour in just 3,9 seconds like the sedan and counts on a Brembo brake system to stop at a short distance.

With a wheelbase of 2 960 mm, It offers a generous 5-seat layout with maximized cabin space, standard lounge seats, and second-row seats with power-adjustable seatback between 23° to 31°.

The ES7 comes standard with PanoCinema, the augmented reality (AR/VR) digital cockpit system developed with Chinese NREAL, including custom AR glasses that can project an effective 201-inch screen at 6 meters.

Another feature that will be appreciated by caravan and boat owners is the (optional) electric retractable towing hook and the certified towing capacity of 2 000 kg. In addition, ES7 can supply power to towed equipment. In outdoor scenarios, NIO says, it can support the Camping Mode and V2L discharging, meaning you can power appliances on higher voltages plugged into the car.

But you don’t need to buy a battery, as NIO offers a rental service for its swappable batteries, called BaaS (Battery as a Service). The carmaker is pioneering this with the Chinese battery giant CATL. Then we’re talking about starting prices as low as RMB 398 000 (€56 312). BaaS rental prices vary from €124 to €187 per month.

Swappable batteries are seen as an interesting solution for EVs that constantly have to be on the road like taxis, losing no time in recharging as they can have the battery swapped with a charged one in under five minutes.

But the rental service offers other opportunities too, like opting for a ‘small’ battery of 75 kW during regular daily traffic and swapping to a 100 kW or even 150 kW battery when leaving on holiday by car.

So far, NIO didn’t specify when the ES7 will come to Europe. In March of this year, it claimed that by 2025, the carmaker plans to expand its presence to over 25 countries and regions worldwide.

The Chinese carmaker started its European offensive last year in Norway and plans to launch in Germany, the Netherlands, Sweden, and Denmark in 2022. It will not be the ES8 SUV, but rather the ET7 sedan that will be delivered first in Germany in the fourth quarter.

NIO says if demand for the ET7 in Europe is high, it will consider cooperating with local subcontractors to build the cars on the old continent. That might be another opportunity for Dutch NedCar, losing BMW as a client for making MINIs and the X1.

With the NIO models, the NIO battery swapping system and the BaaS service are coming to Europe. Chinese media suggested earlier this month NIO is to build a factory for manufacturing its automatic battery swapping stations and charging stations in Hungary for Europe. The management now confirms the latter.