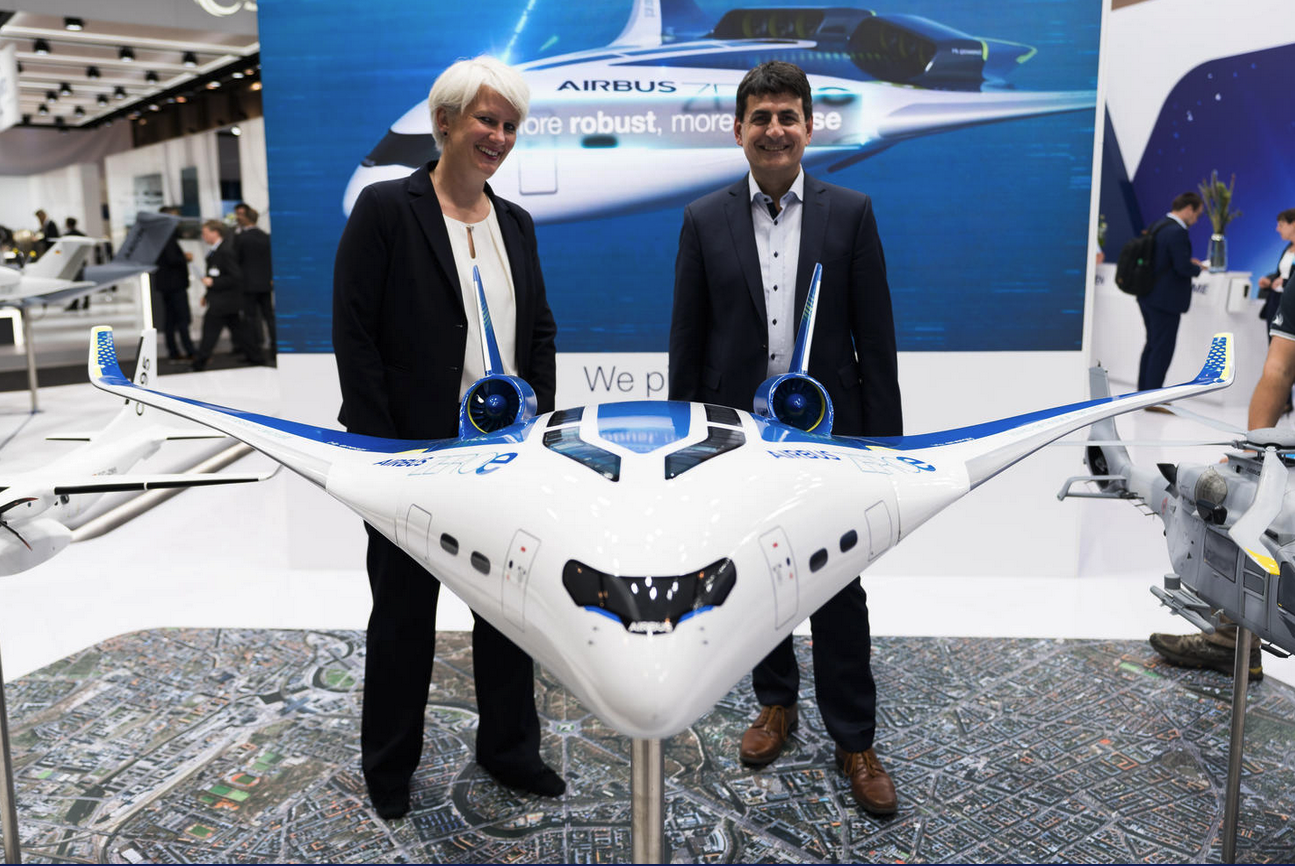 Airbus CTO Sabine Klauke and Philippe Peccard, Vice President Clean Energy at Linde, in front of a model of the V-winged concept plane that is to fly on hydrogen by 2035 /Airbus

The European Commission calls on all partners in the aviation sector to join forces in an alliance on zero-emission aviation. Over the next two decades, the Commission says, more than 44,000 new aircraft are expected to be on the market. It estimates the potential market volume for zero-emission aircraft at 26 000 by 2050, with a total value of €5 trillion.

All facets of the ecosystem

The task of the European Alliance will be to identify the hurdles to take to make the transition in the aviation sector, looking at all facets of the ecosystem. Not only electric or hydrogen planes to fly, but also all infrastructure needed and standardization and regulation that goes with it all.

“Europe’s aeronautics industry is the most innovative in the world. And its enthusiasm – from large manufacturers to equipment suppliers and small companies and start-ups – to lead the way to hydrogen and electric propulsion aircraft is really encouraging,” says Commissioner for Internal Market, Thierry Breton.

“But the entire aviation ecosystem, including fuel suppliers, airport operators, and regulators, also needs to get ready. The Alliance for Zero-Emission Aviation will help coordinate efforts by companies and organizations to maintain a competitive and sustainable aviation sector.”

Airbus and Linde are taking the lead

European airplane giant Airbus is a good example of taking the lead in zero-emission aviation, working on airplanes for the long-haul burning hydrogen instead of kerosine by 2035. But it’s thinking ahead of the infrastructure needed for this too. It just signed a Memorandum of Understanding (MoU) with German hydrogen specialist Linde.

That covers collaboration on global supply chains for hydrogen, from production to airport storage, including the integration of refueling into normal ground handling operations. According to the press release, both companies will define and launch pilot projects at several airports from early 2023 onwards.

“In addition, Airbus and Linde will analyze the potential of Power-to-Liquid fuels – a type of Sustainable Aviation Fuel (SAF) made from the synthetically produced liquid hydrocarbon through the conversion of renewable electricity.”

In that process, ‘green’ hydrogen is combined with captured CO2 to make the fuel ’emission neutral’ as the CO2 emission during the flight is compensated by the CO2 used to make the SAF. Just a week ago, an Airbus H225 helicopter performed the first-ever helicopter flight with 100% sustainable aviation fuel (SAF) powering both Safran’s Makila 2 engines.

Already in September 2020, Airbus has presented three concepts of zero-emission airplanes using liquified ‘green’ hydrogen as fuel. It believes these planes will be ready to start test-flying by 2028 and ready to fly by 2035 commercially. That’s the date set by the French government to put €1,2 billion on the table by 2022 to support it as part of the rescue plan for the aviation industry.

The most spectacular design is the delta wing Airbus has been working on since 2017, the MAVERIC. Airbus already revealed a demonstrator scale model in February. It is a so-called ‘blended-wing body’ design for up to 200 passengers in which the wings merge with the aircraft’s main body. It will have a range comparable to the turbofan.

Because of the exceptionally wide fuselage that merges into the wings, passengers can sit in a V-configuration on both sides of the plane, and there is far more space to store the hydrogen tanks behind them.