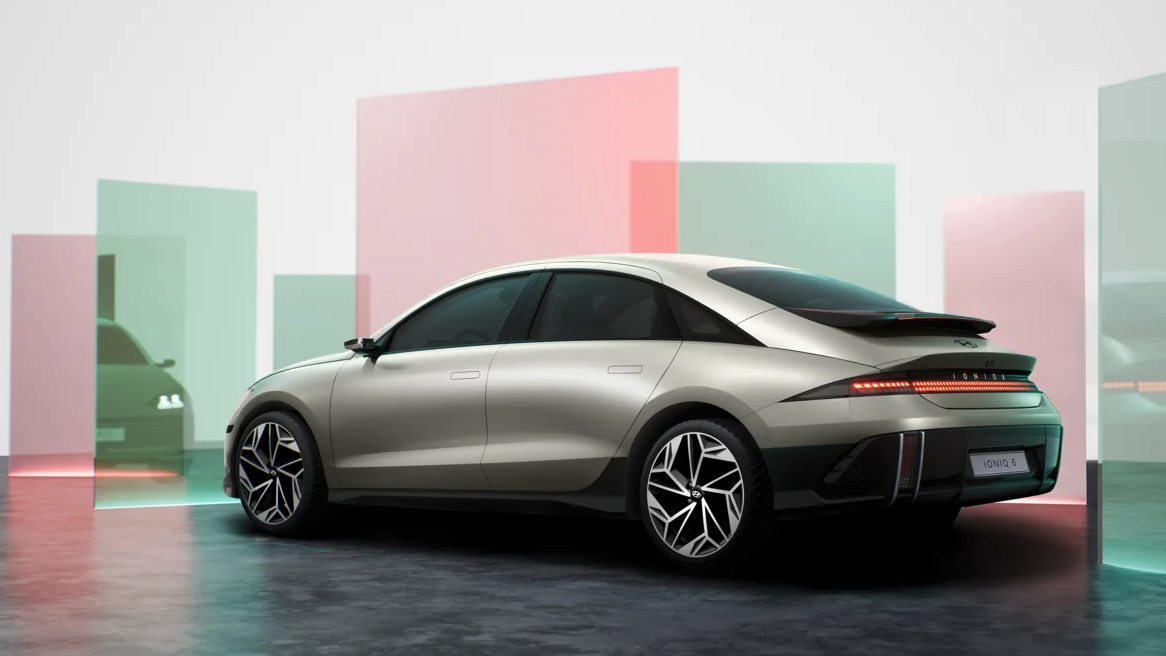 Ahead of the final launch in July, Hyundai has lifted the veils on the design of the new Ioniq 6 sedan, which it calls an ‘Electrified Streamliner’. With a drag coefficient of 0.21, a mix of classic and modern car designs, and a curvature like a banana, it looks pretty different from the boxy Ioniq 5 SUV.

That sleek coupé-like body style and low drag coefficient minimizing air resistance, almost equal to that of the Mercedes EQS (0.20), promise good energy consumption figures. But so far, Hyundai didn’t release any technical details at this stage, which it will keep for the official launch.

Most striking in the Ioniq 6 design is the looks of the tail, which, especially in the dark, mimics that of the Porsche 911, with a tail spoiler and ‘Parametric Pixels’ lights spanning the whole width of the car.

The interior isn’t quite as futuristic as that of Hyundai’s Prophecy EV Concept. It instead leans on the dashboard design of the Ioniq 5 with two 12″ screens and a similar-looking steering wheel. The pictures released give no insight into the rear of the vehicle. That is said to be luxurious for the passengers in the back with ample leg room.

We know technically that the Ioniq 6 and the seven that are to follow are also built on the same 800-volt E-GMP EV architecture as the Ioniq 5.

According to the first technical key data already revealed in a media briefing, the Ioniq 6 is to be offered with a 73 kWh battery and two drive variants with 160 kW (one electric motor) and 230 kW output (two engines, all-wheel drive). The Ioniq 7 will also be available with the 230 kW all-wheel drive but will get a 100 kWh battery pack.