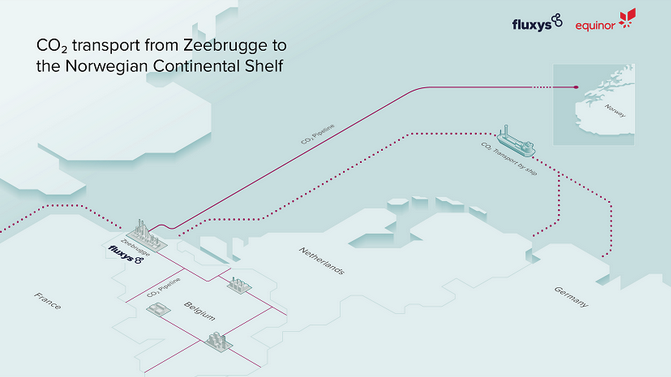 The Fluxys-Equinox project is still in the phase of the feasibility study. It would require a significant investment, though. Expectations are that a final decision about the project will be taken by 2025 /Fluxys.com

The Belgian gas net manager Fluxys and the Norwegian energy company Equinox are analyzing the feasibility of an undersea pipeline for the transport and storage of CO2 in the Norwegian gas fields. The pipeline would connect Zeebrugge and Norway and cover a distance of 1 000 km.

Industrial CO2, captured in Zeebrugge, could then be transported to storage space in Norway. The undersea pipe in Zeebrugge could be linked to the CO2 transport pipes Fluxys wants to build on the land. CO2 could be transported by ship or by providing branches to other countries in northwest Europe.

Today, the Fluxys-Equinox project is still in the phase of the feasibility study. It would require a significant investment, though. Expectations are that a final decision will be taken by 2025. If the project gets the green light, the goal is to transport 20 up to 40 million tons CO2 annually. For comparison: in 2020, Belgium emitted about 106 million tons.

According to both initiators, the project could be “the solution for large-scale decarbonization in Northwest Europe”.

“With our complementary knowledge and expertise, we offer large emitters in Northwest Europe a reliable and effective solution for the transport and storage of CO2”, says Pascal De Buck, CEO of Fluxys. “It’s essential to meet the climate goals and to make the economy permanent in the long term.”

In Belgium, the project could be a solution for the industry in the Ghent canal zone (almost 13 million tons) and the Antwerp port (18 million tons).

The CCS principle – Carbon Capture and Storage – is one of the ways to reduce CO2 emissions and meet the climate goals. The Antwerp port already has a similar plan, in which Fluxys is involved, to transport liquid CO2 by ship.