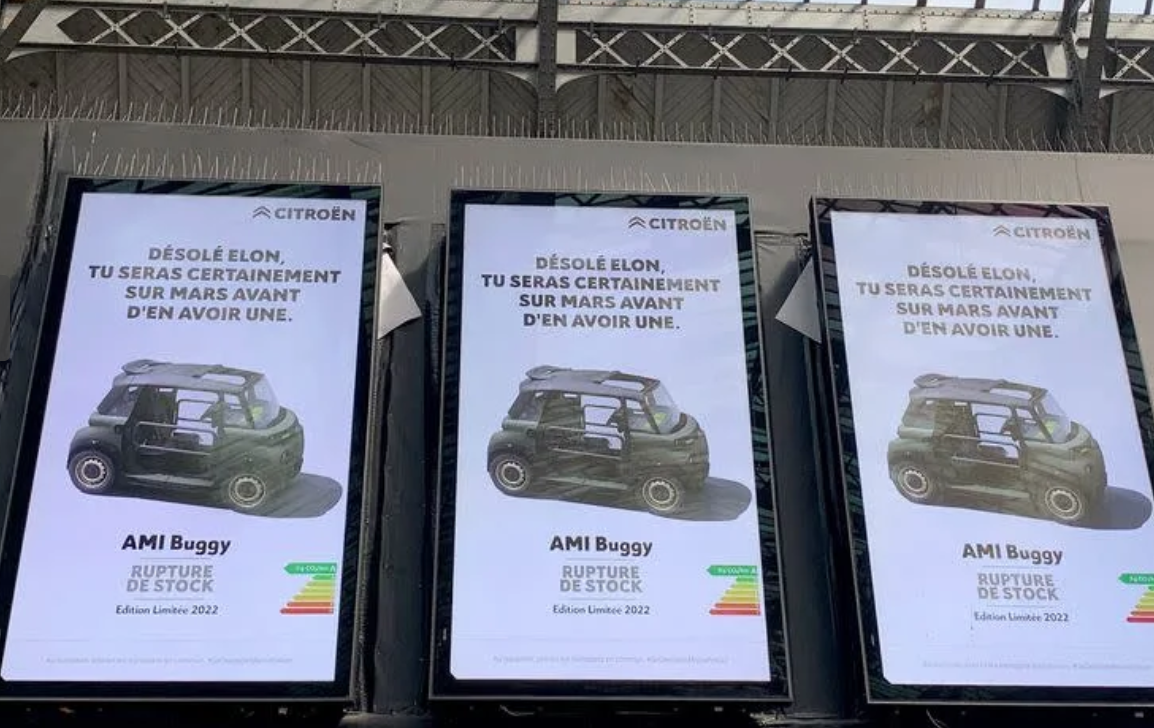 Citroën has recently communicated that their My Ami Beach Buggy, a limited edition of 50 units, sold out in just 17 minutes and 28 seconds. A minimal, limited edition, so it was obvious from the beginning that the offer couldn’t match the nearly 1 800 signs of interest the French brand received. Still, such instant success prompted a rather cheeky poster campaign.

In Paris, Citroën had hung up posters with messages to Elon Musk to mark the rapid sell-out of its small electric vehicle. Different versions say: “Sorry, Elon. The only way to get one is to buy us,” or “Sorry, Elon. You will surely be on Mars before you get one.” The latter is the one pictured here.

Struck a small gold mine?

While the off-road version of the Ami may have been a little teaser project, Citroen is actually on to something. Since revealing the quadricycle in early 2020 with a price tag below € 7 000, the French company says it has already won over 21 000 customers in nine countries across Europe, Turkey and Morocco.

Meanwhile, the manufacturer has launched an interesting cargo version and has even lent its idea to Stallantis partner Opel to give birth to the Opel Rocks-e. Having seen that the interest from the general public for this original four-seater is more significant than expected, one can be sure that Citroën is brooding on other means to sell its new small golden egg.

“The dazzling success of this limited edition shows just how incredibly enthusiastic people are about exclusive versions of this mobility object,” Citroën said in a recent statement. For the limited edition ‘My Ami Buggy’ version, the roof is replaced with a canvas that can be rolled back, and metal tube gates replace the doors. It was sold for just under € 10 000.

The spec has remained the same in all variants: the 5,5-kWh-battery claims a range of 70 kilometers, and this light electric vehicle (LEV) or quadricycle has a top speed of 45 kph, making it suitable for driving without a license in most EU countries.