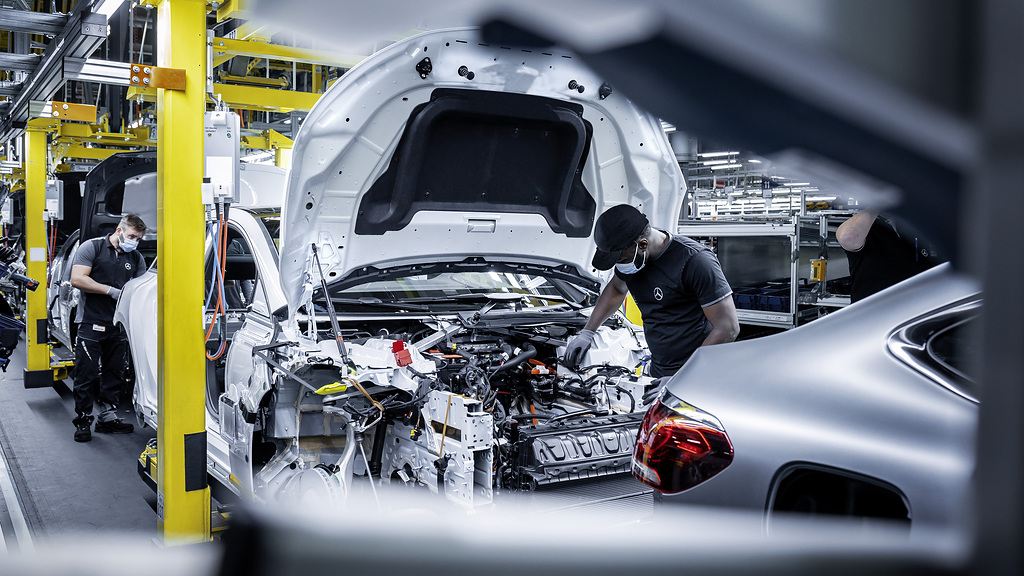 Mercedes-Benz is injecting an extra two billion euros to prepare its network of European production plants for the brand to go all-electric by the end of the decade – ‘wherever market conditions allow.’

The German carmaker reshuffles production of the future product portfolio focusing on three categories: Top End Luxury, Core Luxury, and Entry Luxury. Handelsblatt wrote a few days ago that the A-Class hatchback and B-Class MPV will disappear after 2025. GLA, GLB, CLA Coupé, and CLA Shooting Brake get an electric successor.

The Mercedes-Benz Sindelfingen site is the lead plant for the Top End Luxury segment and will produce from 2025 models based on the electric AMG.EA platform, an all-new architecture for electric performance cars.

The Vision AMG concept Mercedes unveiled last month might be the future successor to the GT 4-Door and materialize into a competitor for the Porsche Taycan. In that ‘Top End Luxury’ lineup, the carmaker also sets the electric EQS and the classic S-Class, G-Class, and AMG with combustion engines today.

The all-electric EQS luxury sedan production started last year at Factory 56 at the Mercedes-Benz plant in Sindelfingen. In Factory 56, the S-Class, the Mercedes-Maybach S-Class, and the EQS are flexibly produced on the same line. Mercedes sees Factory 56 as the future of new standards in automotive engineering.

In Bremen, Germany, and Kecskemét, Hungary, Mercedes plans to manufacture vehicles based on the electric MB.EA platform. In May 2019, the EQC  was integrated into ongoing series production at the Mercedes-Benz plant in northern Germany. Production of the EQE started a few months ago.

In Hungary, the EQB compact SUV was launched at the Mercedes-Benz Kecskemét plant in 2021 as the first pure electric car in production there, next to the CLA Coupe, CLA Shooting Brake, and the A-Class with its ICE, plug-in hybrid, and AMG versions. From 2024, new models of the ‘Entry Luxury segment’ based on the MMA platform and a model based on the MB.EA platform will be built there.

The all-electric EQA started production at the Rastatt plant in 2021. Rastatt and Kecskemét will also produce the repositioned models based on the MMA platform from 2024 onwards. Today, Rastatt is outputting classic compact vehicles of the A-Class, B-Class, and GLA with a combustion engine and plug-in hybrid drivetrain.

For the B-Class, we already knew it’s over and out in 2025, but apparently, that’s the faith of the compact A-Class too. Eventually, last month Mercedes CEO Ola Källenius unveiled plans for his company to focus more strongly on luxury and higher-margin models during a meeting with possible investors.

The new strategy Källenus specified then will affect the lower classes in the range, notably A- and B-Class, where the line-up will be thinned out from seven to four models. The CLA Coupé and CLA Shooting Brake will get an electric successor, as well as the GLA and GLB on the MMA platform, which leaves room for fully electric and hybrid drivetrains.