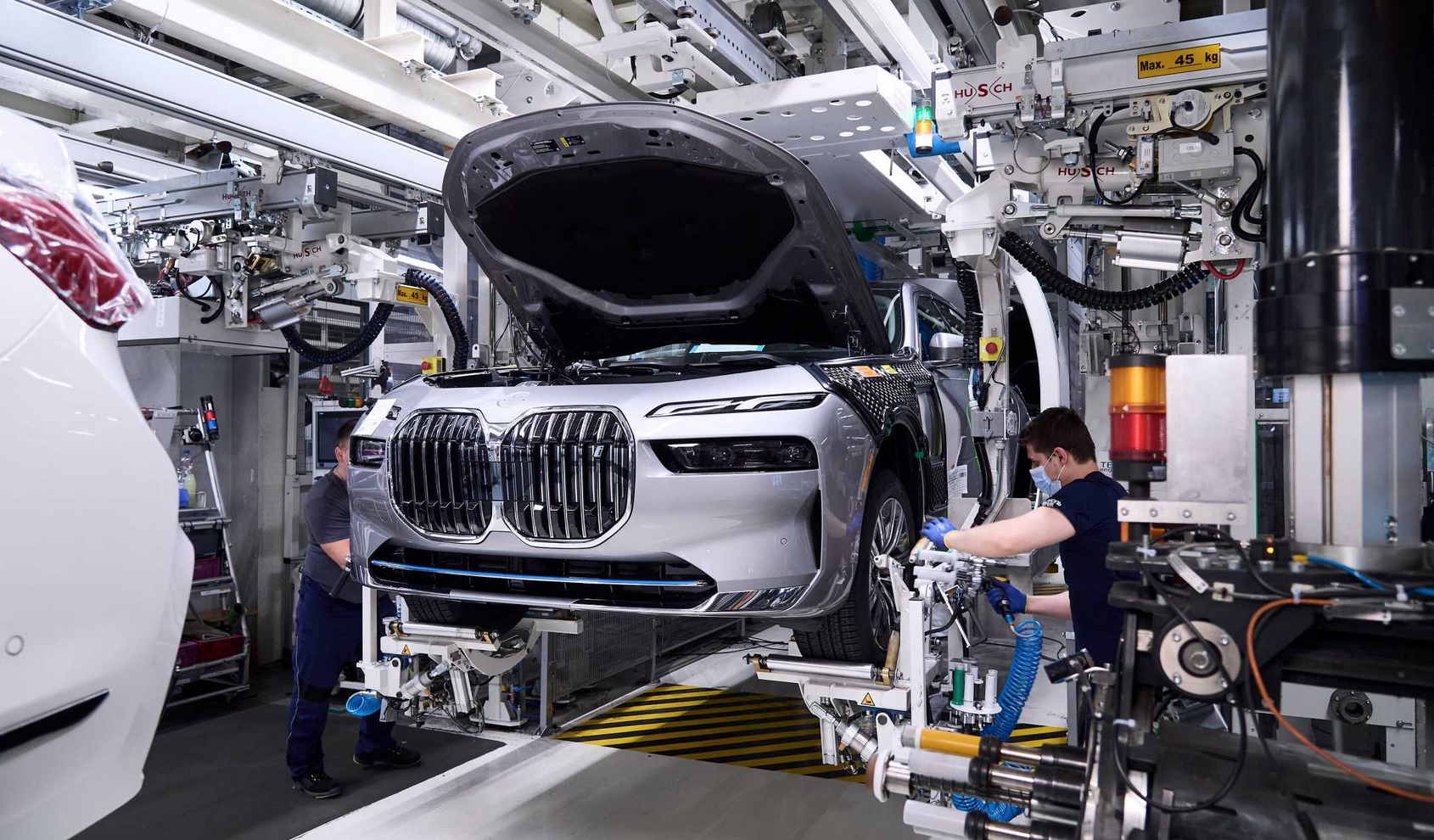 The first production models of the new 7 Series have now rolled off the production lines at the BMW plant in Dingolfing, including the all-electric i7 offshoot. Meanwhile, BMW seems also to consider producing the future ‘New Class’ models in its plant in Mexico for the American market.

The BMW Group has invested more than € 300 million in the Dingolfing plant to produce the new BMW 7 Series. Once production has started and the dealership organization has been supplied with display and demonstration vehicles, the 7 Series models will be available to customers worldwide from autumn.

The new 7 Series will be built on one assembly line in a mix of 5 Series and 8 Series models as well as the all-electric BMW iX. “The individual drive variants of the BMW 7 Series are 100% interchangeable,” emphasizes plant manager Christoph Schröder. “This enables us to build with the actual drive mix in demand and utilize our plant to the best possible capacity.” The all-electric version of the 5-series is to follow next year.

“Dingolfing’s transformation into a BMW iFactory is well underway,” added Christoph Schröder. “We have hundreds of employees working to make our plant more efficient, flexible, and sustainable, with effective innovations and digitalization solutions as the key drivers of progress. The Lean. Green. Digital. approach of the BMW iFactory is already a reality in the production halls of Plant Dingolfing.

The aspect of Lean is being realized at Plant Dingolfing to a large degree by the flexible layout of production structures. “Our structures give us the exchange flexibility we need to switch between different models and drive types, the volume flexibility to react quickly to radically fluctuating demand, and the order flexibility to accommodate the last-minute changes customers can request up to just a few days before their car is produced. Here in Dingolfing, flexibility is simply a part of our DNA,” said Christoph Schröder.

The Green aspect of the BMW iFactory and sustainable production in Plant Dingolfing is realized by a range of measures. These include sourcing 100 percent green energy, re-using several hundred existing production robots in the body shop, and reducing the consumption of resources in the paint shop.

Production of the new 7 Series also uses a digital innovation with major potential for assembly and outbound logistics: automated driving in-plant (‘automatisiertes Fahren im Werk’, or AFW). The AFW project will be piloted in Dingolfing from July and sees the newly produced BMW 7 Series drive automatically along a 170-meter route from the first ignition and initial testing area in assembly to the finish area in the plant. The same method will be used to get vehicles from the finish line to the dispatch area.

Plant Dingolfing, in Lower Bavaria, has been the home of the flagship BMW 7 Series since 1977 and is now manufacturing the seventh generation. It is the BMW Group’s lead plant for large BMWs. It has extensive expertise in production launches and decades of experience in manufacturing premium vehicles for the luxury class. To date, Plant Dingolfing has manufactured a grand total of more than 11 million BMW cars, and a further production milestone is on the schedule this year: the two millionth BMW 7 Series.

Plant Dingolfing is one of the BMW Groups’ more than 30 production sites worldwide and its largest in Europe. Every day around 1 600 BMW 4 Series, 5 Series, 6 Series, 7 Series, 8 Series, and all-new, fully electric BMW iX vehicles roll off the production lines in car plant 02.40. In 2021, annual output totaled some 245,000 units. The site currently employs some 17 000 people. It is also training about 850 apprentices for 15 professions.

Dingolfing manufactures not only cars but also vehicle components, such as pressed parts, chassis, and drive systems. Located in component plant 02.20 is the BMW Group’s Centre of Competence for E-Drive Production, which provides BMW vehicle plants around the world with electric motors and high-voltage batteries for plug-in hybrids as well as fully electric models. It is under constant development and currently employs over 2 300 people.

The BMW plant in San Luis Potosi, Mexico, is rumored to have plans to produce electric cars based on the New Class for the North American market from 2027. Reports claim an i3 sedan and station wagon are planned, as well as the new generation of the iX3.

The i3 model designation is free for new models, as the production of the iconic i3 compact electric car in Leipzig has now ended with a special edition limited to ten units. In China, the i3 designation is already used for an electric sedan for the local market. In Europe, the first electric cars based on the new-class platform will be manufactured in Debrecen, Hungary, from 2025.