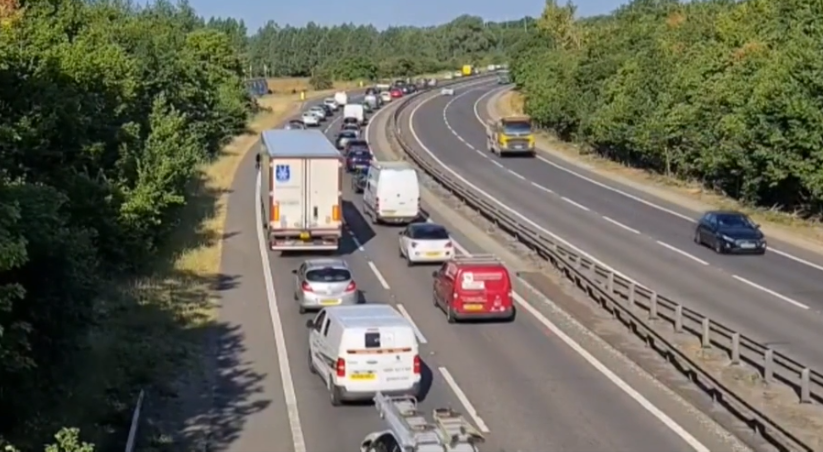 Protesters in the UK created a rolling blockade along the M4, among others, driving at 30 km/hour and almost bringing traffic to a standstill /BBC

Peaking fuel prices in the Uk are triggering a wave of ‘go-slow protests’ on the nation’s highways. On Monday, the police warned about serious disruption throughout the day, and motorists were urged to stay at home where possible.

Protesters created a rolling blockade along the M4, among others – the London-South Wales highway – at the Welsh border to show their vexation about the surging fuel prices. More demonstrations are expected in Yorkshire and Essex.

Cars moved at 30 km/hour as part of the ‘go-slow’ campaign. Gwent Police said: “We are seeing significant delays both east and westbound on the Prince of Wales Bridge due to the planned protest. We are seeking to return traffic to normal as soon as possible.”

According to the RAC motoring organization, gasoline prices have reached an all-time high of 191,03 pence per liter. The average diesel price is 199,00 pence per liter. And even though wholesale gasoline prices have now dropped for five straight weeks, RAC questions why there hasn’t been an accompanying decline at the pump at supermarket retailers.

Prices at the pump have been climbing steadily for months, due to higher post-pandemic demand and western sanctions against Russia, one of the world’s largest oil exporters.

The UK now has the most expensive fuel of any of Europe’s five largest economies, data compiled by Bloomberg show. Today, fuel prices in the UK are higher than in Spain, France, Italy, and Germany.

The protests are understood to have been organized via social media under the banner Fuel Price Stand Against Tax. For some people, the situation is getting unbearable. Some even have to leave their jobs because they cannot afford the fuel any longer.

The Gwent Police finally closed off the M4 Prince of Wales Bridge linking England to the Welsh cities of Newport and Cardiff. Twelve people were arrested for bringing traffic to a standstill during the morning rush hour on Monday, July 4th.