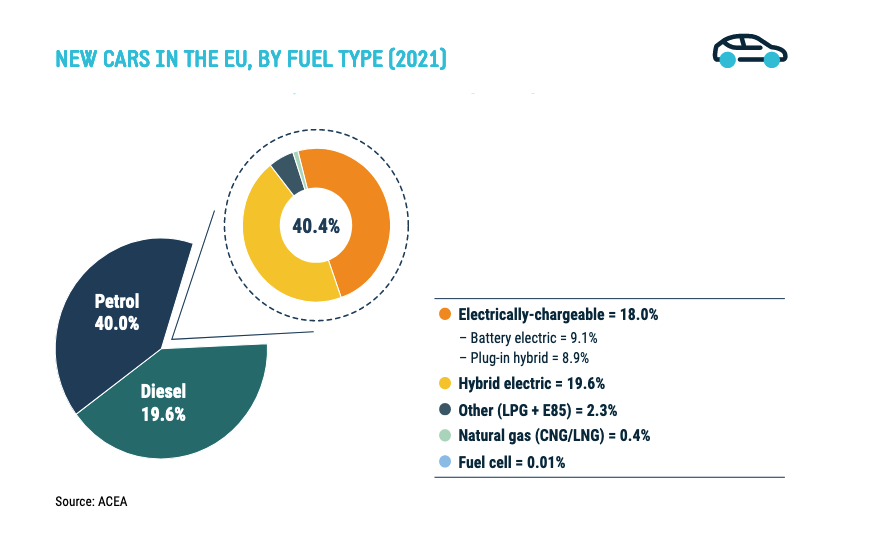 Overviewing the whole car market in Europe today, the number of cars with some kind of electrification (HEV, BEV, PHEV) equals that of gasoline cars today, both accounting for 40%, and diesel only 19,6% /ACEA

With a market share of 18% or 1 744 520 newly registered cars in Europe, the ‘electrically chargeable’ car uptake has multiplied tenfold in the last five years. That means almost one in five cars sold has a plug (BEVs and PHEVs), compared to one in ten (10,5%) the year before. It’s one of the eye-catching figures from the car manufacturers federation ACEA’s ‘2022 Progress Report‘ published Thursday.

At the same time, sales of classic hybrid vehicles (HEVs or full hybrids and mild hybrids) reached almost a 20% market share, up from 12% in 2020. Contrary to plug-in hybrids (PHEVs) and battery-electric vehicles (BEVs), a classic hybrid can’t be charged by plugging it into the grid.

A full hybrid like a Toyota Yaris, Auris, or Prius has an electric motor and a combustion engine (ICE) capable of powering the wheels. The (smaller) battery is charged by brake energy regeneration or the alternator of the fuel-powered engine, but pure electric driving is limited to short distances and limited speed.

A mild hybrid has an electro motor to assist the combustion engine at all times, without direct connection to the wheels. Depending on the driving style, mild hybrids are assumed to reduce C02 emissions by 10 to 20%.

In general, full hybrids are assumed to consume 20 to 40% less and accordingly emit up to 40 less CO2, compared to 50 to 75% for a PHEV. That is if the PHEV is driven to its maximum on electric power.

Europe just decided this week to toughen emission ratings for plug-in hybrids (PHEV) by 2025 to mimic better the actual amount of CO2 they emit on the road, being sometimes three to five times higher than ‘officially advertised’.

Looking at the market share of all types of ‘alternative powered’ vehicles, including the ones on natural gas or LPG, shows interesting differences between countries. In Belgium, BEVs accounted for 5,9% and PHEVs for 12,5%. In the Netherlands, the opposite is showing, with BEVs (19,8%) outselling PHEVs (9,6%). 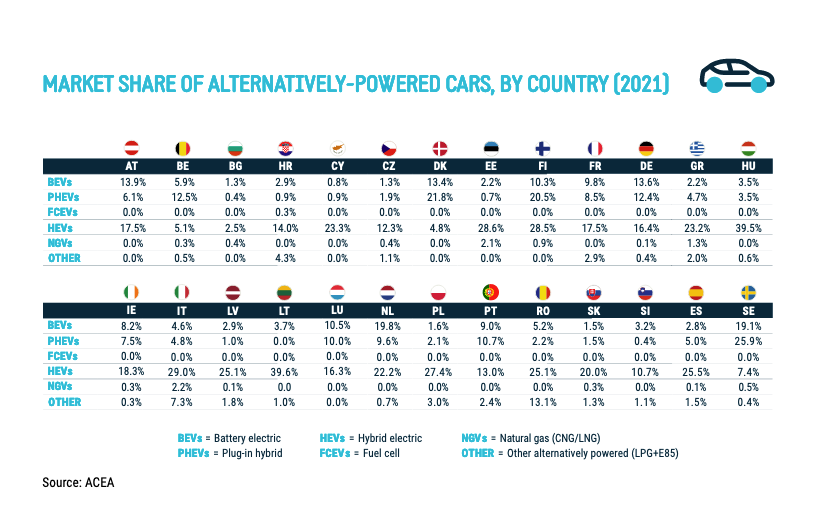 It can all be traced back to the differences in incentives offered by the governments. The Netherlands scrapped the historic generous subsidies for PHEVs some years ago in favor of fully electric cars. In Belgium, PHEVs benefit until 2023 from 100% tax deductibility like BEVs, but from 2026 only zero-emission vehicles will be allowed for the company car fleet.

And as company cars make out more than half of new registrations each year, one might expect to see the BEV share skyrocket in the next few years. Companies today already push electric cars, which are often the better option, considering the Total Cost of Ownership (TCO). The latter was again illustrated by a Leaseplan’s TCO Index study in 2021.

The picture might be completely different in other European countries, as ‘affordability’ is still a significant issue when buying a new electric car. People tend to look at the initial higher purchase price rather than TCO.

Diesel is still king in the van market

Overviewing the whole car market in Europe today, the number of cars with some kind of electrification (HEV, BEV, PHEV) equals that of gasoline cars today, both accounting for 40%, and diesel only 20%. By 2035, only zero-emission cars will be sold in Europe, as confirmed by the 27 member states last week.

Battery electric vans saw a threefold increase to 44 608. Plug-in hybrids are far less prevalent in this segment, with only 2 239 new registered. Classic hybrids sales doubled to 25 496. And hydrogen-powered vans won’t cross your path very often as only six new ones were registered in the whole of Europe. 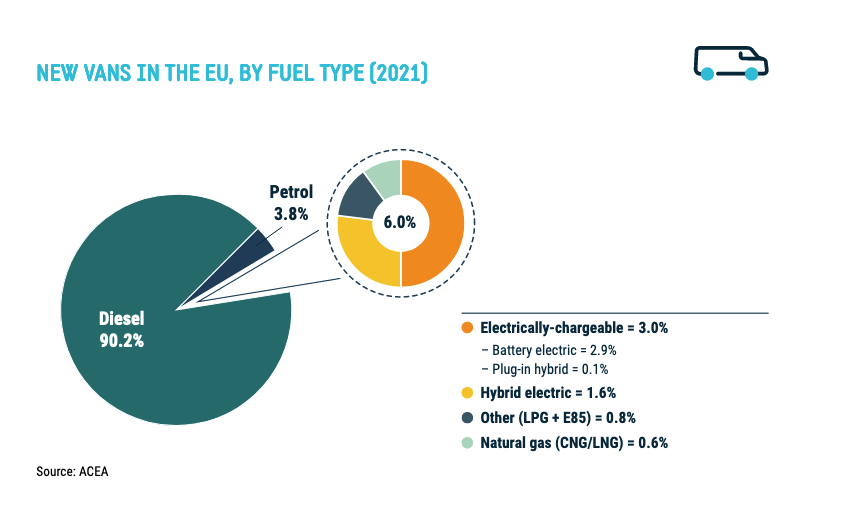