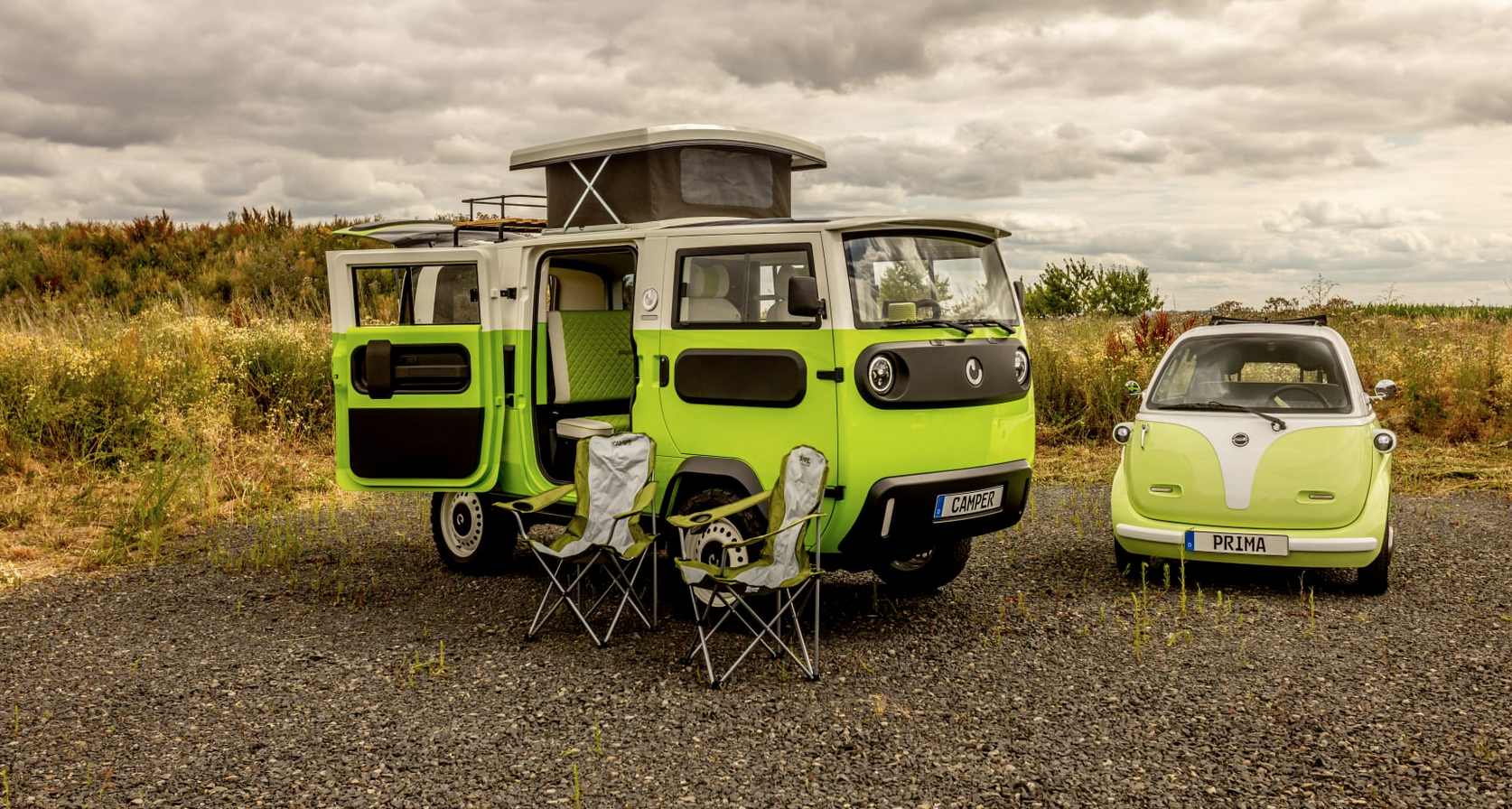 The Itzehoe-based German manufacturer ElectricBrands presented a camper van based on its electric light vehicle XBUS. There is also news about the Microlino clone Karo, which ElectricBrands plans to launch later this year as the ‘Evetta’.

ElectricBrands does not give many details about the new ‘Camper’ in the press release, except that it is “at the top of customers’ reservation lists”. The ‘Camper’ features a small pop-up roof to increase the headroom in the interior.

In addition, according to the pictures at the rear, the cabin can be extended somewhat through a pull-out, which should result in a larger sleeping area. Behind the pop-up roof, a grille is mounted on the prototype, on which additional luggage can be lashed.

There is no information in the current press release about possible further developments in drive technology. To meet the requirements of the L7e class, the continuous power of the four-wheel hub motors is 15 kW; according to the information from last summer, 56 kW is possible as peak power for a short time.

The battery is modularly constructed in swappable packages of 1,25 kWh each, so between 10 and 30 kWh can be installed in the chassis, depending on the application. It is said that the batteries are ‘cobalt-free lithium-ion batteries from German production.’ So, most probably, the batteries have lithium iron phosphate chemistry. The range is said to be between 100 and 600 kilometers, depending on weight and battery capacity.

Currently, Electric Brands doesn’t mention when the vehicle could be produced or how much it would cost.

Another L7e vehicle from ElectricBrands is becoming concrete. As reported earlier, ElectricBrands has taken over Artega and the rights to the Microlino copy, which was called Karo at the time. Karo has now become Evetta.

According to ElectricBrands, the BMW Isetta-inspired vehicle is “close to production readiness and developed at the Göttingen site”. In April, a market launch in early 2023 was still mentioned. However, according to the latest information, the first Evettas will be delivered to customers this year.

Pre-orders are to be possible from 22 July in ElectricBrands’ online shop. The Evetta is 2,48 meters long, 1.50 meters wide, and has a range of up to 200 kilometers. The maximum speed is 90 kph.

In addition, a cargo version can be seen in the pictures, with a loading platform attached to the Isetta-like body. The wheelbase is longer in this version. More technical details are not yet available. It’s unknown whether this cargo version will also become available, for last-mile delivery, for example.