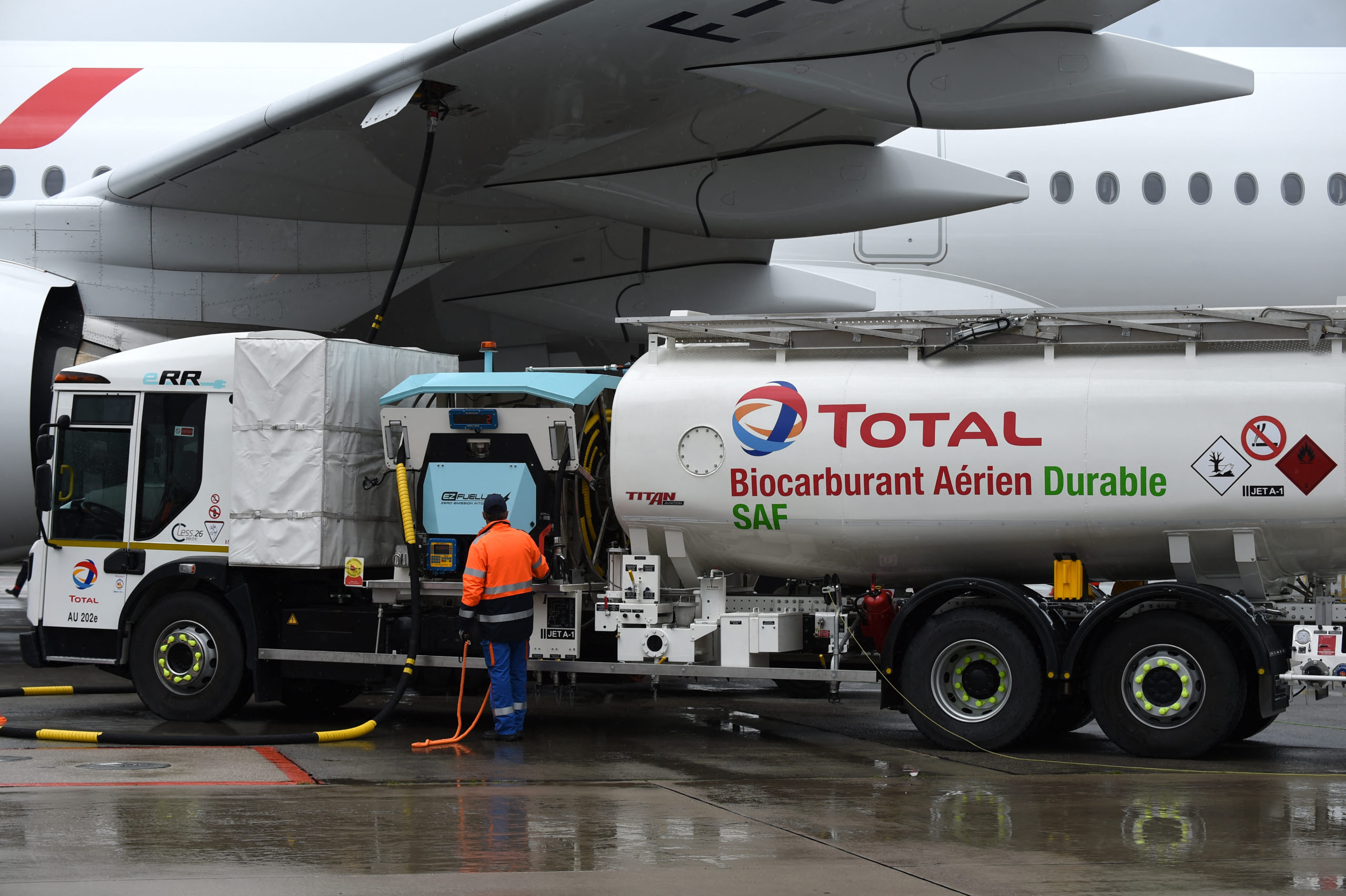 On Thursday, the European Parliament agreed to set a roadmap for the sector to fly on sustainable aviation fuel (SAF) made from food waste, animal fat, or hydrogen, and CO2 instead of pure fossil kerosine. The MEPs went further than the EU Commission, setting the bar to 85% added SAF by 2050 instead of the proposed 63%.

By 2025, all airports in the EU should be able to fuel airplanes with a mixture of 2% SAF added to the kerosine, up to 5% in 2030, 37% in 2040, and 85% in 2050. For the production of biofuels, the MEPs exclude the use of crops meant for human or animal food, like palm oil or soybeans. As that fuel is far more expensive, ticket prices will undoubtedly increase.

Mixing sustainable aviation fuel (SAF) with kerosine is already done today. Norway was the first to start enforcing 0,5% of biofuels for flights originating from the country in 2020. France followed as one of the forerunners in the world, enforcing airlines to use at least 1% of SAF in all flights originating in France. KLM started adding 0,5% on all flights leaving from Amsterdam, including low-cost daughter Transavia.

In May 2021, an Airbus A350 from Air France-KLM made its first long-distance flight from Paris to Montreal (Canada) on SAF biofuel, made from waste like cooking oil and residue.

SAF can reduce up to 80% in carbon emissions over the fuel lifecycle compared to traditional jet fuel, depending on the sustainable feedstock used, production method, and the supply chain to the airport. In a 16% blend with conventional aviation kerosine, the SAF avoided 20 tons of CO2 or 15% less on this flight to Montreal in 2021.

It comes at a price

French energy giant TotalEnergy delivered the fuel, produced by its biofuel refineries of La Mède in the south of France and the Oudalle factory near Le Havre. But TotalEnergies boss Patrick Pouyanné warned already at that time that “one should not dream that this ecological energy transition will come at the same price.”

One percent of SAF accounts for an extra cost of 100 million euros, Pouyanné said. A few months later, Air France-KLM Group announced in January 2022 that it was raising airplane ticket prices by one to twelve euros depending on the cabin class and distance traveled to pay for the use of SAF.

The prices apply from January 10, adding 1 to 4 euros on an Economy ticket or 1,5 to 12 euros in Business Class, Air France confirmed to its clients.

SAF can be a biofuel or an utterly synthetic kerosine, also called ‘e-kerosine’. The latter is made by combining captured carbon with green hydrogen produced from water and renewable energy. In this way, by capturing the same amount of CO2 from the air that will be emitted during the actual flight later, the balance is carbon-neutral. But this method today is even more expensive.

The European Parliament showed a preference for synthetic fuels over biofuels, which Green NGO Transport & Environment (T&E) applauded. “The MEPs have tripled the synthetic fuel volumes proposed by the Commission for 2030 and decided that in 2050, half of the total jet fuel use in Europe will be synthetic. They are the only fuels that can be sustainably scaled up to reduce aviation’s climate impact,” T&E says.

The targets set by the EU Parliament are yet to be discussed and approved by the 27 member states before becoming legally binding. And the time is running short if all airports in the EU have to be able to fuel planes with a 2% SAF mixture by 2025.

To help the smaller airports develop the necessary infrastructure, the plan foresees using the earnings from the EU’s Emissions Trading System (ETS) for CO2 to subsidize investments.

Today, the refineries producing SAF biofuels can be counted on the fingers of one hand, and those making e-kerosine are even more scarce. In January, news broke that French energy provider Engie and aeronautics group Safran invested in Ineratec, a German start-up specializing in decarbonized synthetic fuels.

Last year, Ineratec opened the world’s largest pilot plant to produce e-fuels. Located in Lower Saxony, the power-to-Liquid plant should have a yearly production of 350 tons of e-kerosene. In 2022, the company plans on building a new pioneer plant close to Frankfurt Airport, which could yield up to 4,6 million liters of e-fuel.

The advantage of flying on SAF is today’s airplane engines can burn it without essential alterations. Another alternative is flying on ‘green hydrogen’, skipping the step to use the hydrogen to combine it with CO2 for e-kerosine. When burning hydrogen, no CO2 is emitted anymore. Still, there remains a problem with NOx.

According to Airbus, it’s not too difficult to adapt the jet engines for burning hydrogen. It’s a technique used for years in rocket engines and satellites. In September 2020, Airbus presented three concepts of zero-emission airplanes using liquified ‘green’ hydrogen as fuel.

It believes these planes will be ready to start test-flying by 2028 and ready to fly commercially by 2035. That’s the date set by the French government to put €1,2 billion on the table by 2022 to support it as part of the rescue plan for the aviation industry.

American aerospace manufacturer Pratt & Whitney is also looking into hydrogen-fueled propulsion technology for commercial aviation. P&W is the third big name in aviation engines, next to Rolls Royce and General Electric (GE). The company with the American eagle in its logo powers with 16 000 engines installed, more than 25 percent of the world’s passenger aircraft fleet.

In March, it announced the HySIITE project, which will use liquid hydrogen and steam injection to reduce NOx emissions to fuel future jet engines. HySIITE stands for ‘Hydrogen Steam-Injected, Inter‐Cooled Turbine Engine’.