IRENA: ‘Hydrogen to dramatically change how energy is traded’ 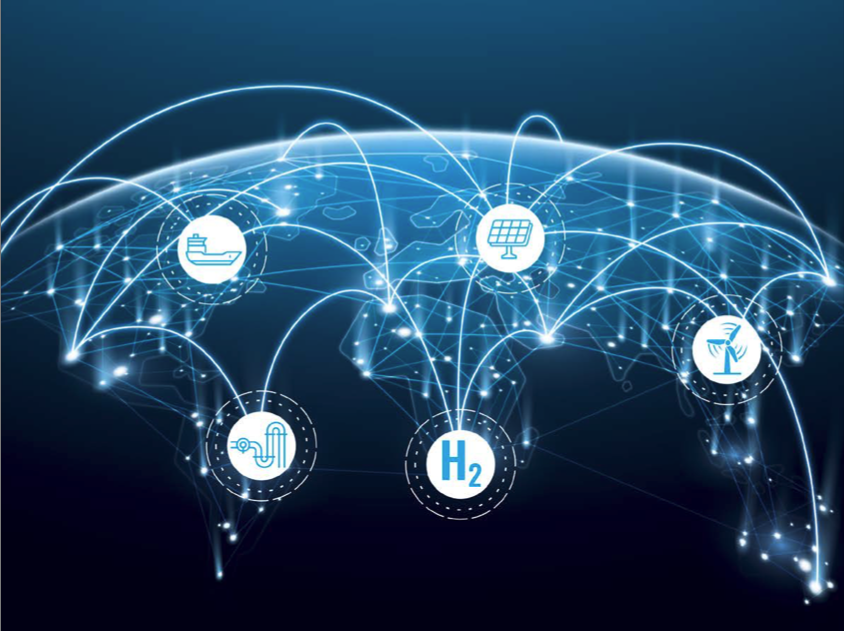 By 2050, about one-quarter or about 150 megatons (Mt] of hydrogen per year of the total global hydrogen demand could be traded worldwide through retrofitted gas pipelines or converted to ammonia for shipping. This would drastically reduce the transport costs and the bulk; 75% would be produced and consumed locally.

The latter is projected by the International Renewable Energy Agency (IRENA) in its most recent study, and it is a radical change from today, where 74% of the oil demand is traded internationally and transported by pipelines or tankers. It is similar to today’s gas market, of which just 33% is sold across borders. This could mean Europe could become a lot less dependent.

Hydrogen to deliver 12% of energy demand

The report entitled ‘Global hydrogen trade to meet the 1,5°C climate goal’ was published last week. It takes as a start the scenario the steps needed to meet the goal of the climate warming up no more than 1,5°C. A target scientists already doubt to be achievable. This study assumes that 12% of the final energy demand will be supplied by hydrogen in 2050.

Producers instead of importers

“The geographical concentration of fossil fuel reserves has made some countries into major producers, while most countries are predominantly importers. Renewable energy, in contrast, can be produced everywhere (although the cost-effectiveness varies by location) and, therefore, has the potential to dramatically change how and between whom energy is traded.”

“However, until recently, there has been no cost-effective way to transport renewable electricity over long distances to link low-cost production sites with demand centers.” Electricity can be transported over high-tension lines only over limited distances without heavy losses. Hydrogen, whether in gaseous or liquid form, is far easier to transport globally if needed.

“The critical factor that will determine the cost-effectiveness of trade in hydrogen will be whether scale, technologies, and other efficiencies can offset the cost of transporting the hydrogen from low-cost production areas to high-demand areas,” the report states.

In other words, if you can’t produce it locally, make it in regions with abundant solar power like the Middle East and ship it as ammonia in retrofitted liquid natural gas (LNG) tankers to Europe, which could be the answer – provided that the cost of producing green hydrogen is sufficiently less expensive in the exporting region than in the importing region to compensate for the transport cost.

Several European countries are already preparing for this kind of scenario. A study published in January 2021 by the Belgian Hydrogen Import Coalition (HIC) shows that shipping wind and solar energy from other sunny and windy parts of the world to Belgian ports is feasible and cost-effective.

And Flemish Minister Hilde Crevits (CD&V) signed in February a Memorandum of Understanding (MoU) with Australia’s island state Tasmania to import green hydrogen or ammonia through the Ports of Antwerp and Zeebrugge. These ports are already important hubs for distributing natural gas and (grey) hydrogen in the chemical industry.

55% to travel to retrofitted pipelines

In its projections, IRENA foresees 55% of the hydrogen to be internationally traded by 2050 to travel by pipelines. These will be mostly existing natural gas pipelines that can reasonably easily be retrofitted.

“This pipeline-enabled trade would be concentrated in two regional markets: Europe (85%) and Latin America,” IRENA says. “The remaining 45% of the internationally traded hydrogen would be shipped, predominantly as ammonia, which would mostly be used without being reconverted to hydrogen.” Renewable ammonia could serve as fertilizer – ammonia’s traditional role – or as an energy-dense fuel.

One dollar per kilogram

According to the IRENA scenario, production costs could drop as low as one dollar per kg of green hydrogen (kgH2) by 2050 in an ‘optimistic’ scenario or stabilize at $1,3 per kgH2 in a ‘pessimistic’ scenario.

To compare: today we see the cheaper grey hydrogen, produced from natural gas in a CO2 emitting process, selling at around €10 in Europe. To give an idea, a Hyundai Nexo can get about 100 km far with one kilogram of that hydrogen. That’s roughly the same distance a fuel-efficient diesel car consuming five liters per 100 km can manage at the same cost with today’s soaring fuel prices.