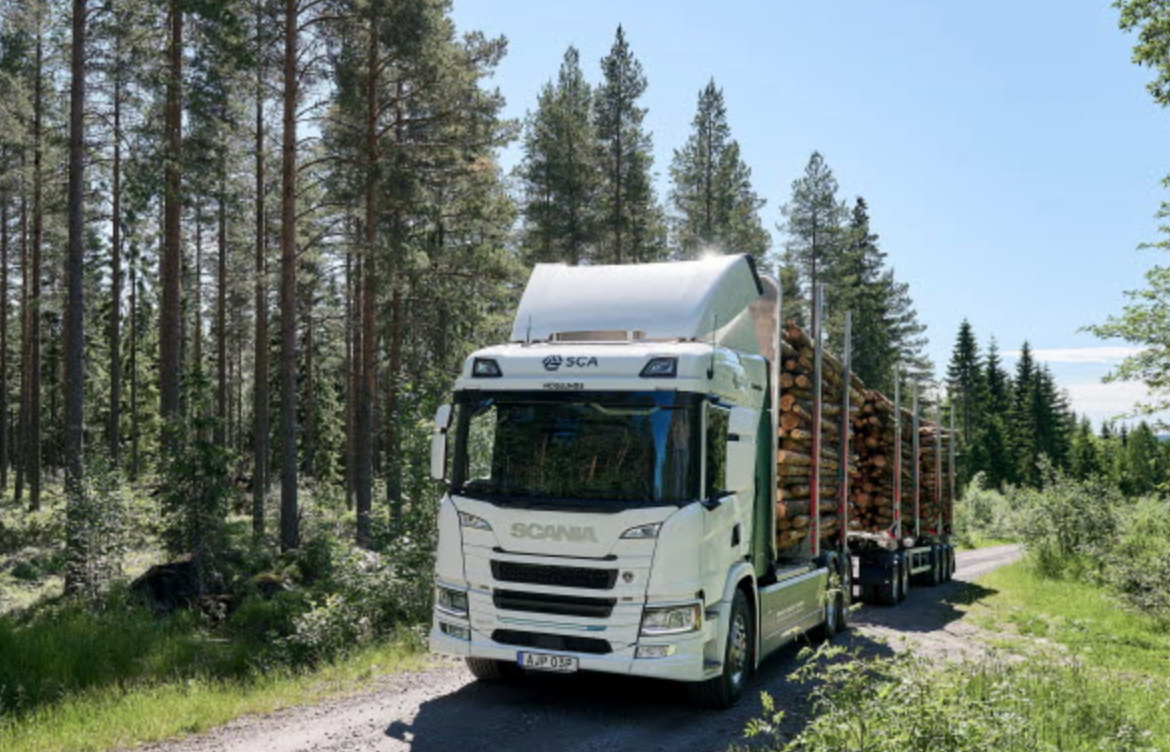 Scania has delivered an all-electric truck specially designed for transporting timber to Swedish timber processor SCA, offering a gross vehicle weight of up to 64 tons on public roads and up to 80 tons on private roads.

The vehicle will transport timber to SCA’s terminal in Gimonäs and the paper mill in Obbola near Umeå (north of Sweden). A trial run will initially take place during the summer, during which the Skogforsk Research Institute will collect data to enable comparisons with diesel-powered timber transporters. After that, the heavy-duty electric truck will enter SCA’s regular operations.

Scania has developed the vehicle closely cooperating with SCA and the Skogforsk Research Institute. Scania is also looking beyond the timber transporter for SCA into battery-electric trucks in extra-long and weight classes beyond 60 tons. This winter, a first example was handed over to the Swedish chemical supplier Wibax.

Scania specified the vehicle itself weighs 10,8 tons, some 1,5 tons more than its diesel counterpart. This is mainly due to the nine battery packs installed, which have a total energy content of around 300 kWh.

In the case of the timber transporter for SCA, the vehicle is charged with an ABB charger with 180 kW of power delivery at the Obbola paper mill. The paper mill has already implemented a ‘virtually fossil-free production process’; the new vehicle is intended to “reduce the fossil elements in the transport chain of raw material to the mill”.

The vehicle is supposed to make six daily rounds (from 7 am to 5 pm) between the timber terminal and the paper mill. One round trip is about 30 kilometers long, and SCA has calculated 75 minutes per trip (including loading and unloading). With only one vehicle, 55 tons of CO2 will be saved annually on the route.

“The 80-tonne battery-powered timber truck shows that even really heavy transport can be electrified,” says Fredrik Allard, Head of E-Mobility at Scania. “The partnership with SCA is an early show of what is possible, is a clear signal that it is possible to electrify even heavy transport.”

“An electric timber truck is a symbol of something pretty cool,” he continues. Shipping of timber has been talked about as something that might never be possible to electrify. The development in recent years and what we are now presenting together with SCA shows how fast the development is taking place both in terms of vehicles and batteries. A change of pace is needed to make Sweden fossil-free in time and meet the goal of the Paris Agreement.”

“This is a first concrete step towards electric propulsion in the most difficult part of the land-borne transport chain, which is extremely important,” says Hans Djurberg from SCA. “This is a global challenge that many have wrestled with, and now we are showing together with an innovative partner, Scania, that Swedish industry can drive sustainability development.”

“Our forests and forest products have created enormous climate benefits for a long time, and our industries are very climate-efficient. This makes it also obvious why we have high climate ambitions for our transport, too,” concludes Djurberg.