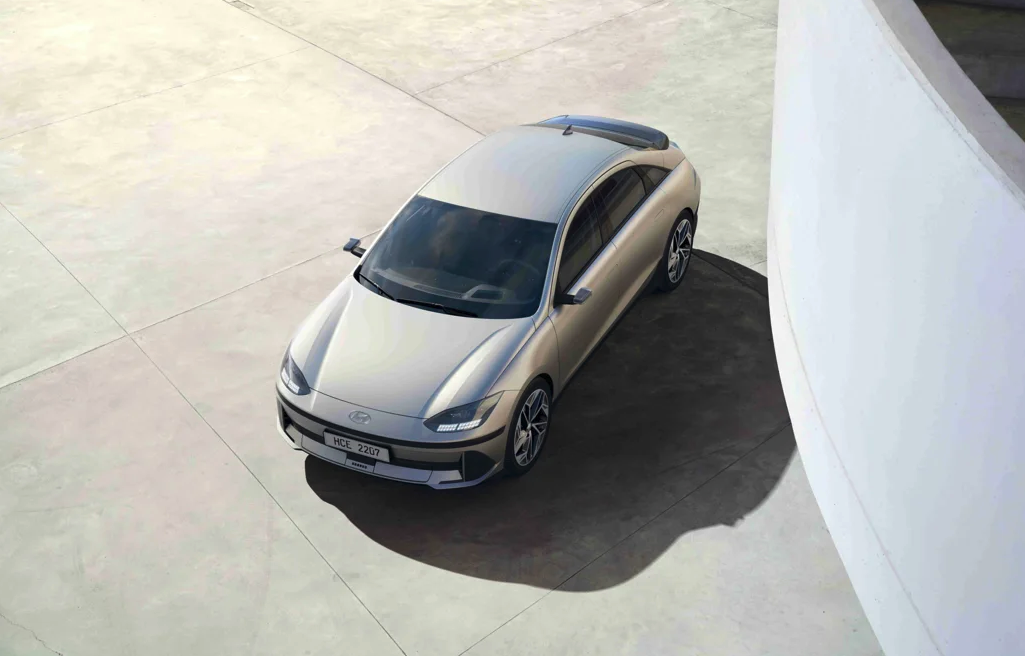 Boxier SUVs and crossovers are wind scoops compared to sleek sedans costing more energy. Hyundai is proving this once again as it released the specs of its newest fully electric sedan, the Ioniq 6. The latter easily gets 100 km further with the same 77,4 kWh battery as the Ioniq 5 crossover, 610 km compared to 507 (WLTP).

Hyundai claims that with an estimated average consumption of 14 kWh per 100 km, the Ioniq 6 – to be produced from the thirty quarter of 2022 – will be one of the most economical EVs on the market. The exact dates of that market launch are yet to be revealed.

End of June, Hyundai lifted the veils on the design of the new Ioniq 6 sedan, which it calls an ‘Electrified Streamliner’. With a drag coefficient of 0.21, a mix of classic and modern car designs, and a curvature like a banana, it looks pretty different from the boxy Ioniq 5 SUV.

That sleek coupé-like body style and low drag coefficient minimizing air resistance, almost equal to that of the Mercedes EQS (0.20), promised good energy consumption figures. And that proves to be a reality as Hyundai unveils the final specs.

The basic version of the Ioniq 6, with rear-wheel drive and a 53 kWh battery (compared to 58 kWh on the basic Ioniq 5), claims to keep energy consumption below 14 kWh/100 km. So far, Hyundai didn’t stick a WLTP range label on this version, but it will at least compare to the 384 km range of the Ioniq 5 with the standard battery pack.

The most powerful version will be the AWD with dual motors and a combined output of 239 kW and 605 Nm of torque, capable of sprinting from 0 to 100 km/hour in 5,1 seconds. With rear-wheel drive only and the long-range battery capacity of 77,4 kWh, you should get as far as 610 km with this Ioniq 6.

And when that’s not enough to mitigate your range anxiety, you can charge from 10 to 80% in 18 minutes at a 350 kW DC charger if you can find one that actually delivers that advertised maximum. The Ioniq 6 sits on the E-GMP platform that supports 400-V and 800-V charging infrastructure.

Ample space for four to five

For instance, the EV seats are 30% thinner than in classic Hyundai models to provide more leg room for the passengers sitting in the rear. A nice safety feature for these passengers in the back is the Safe Exit Warning (SEW) that alerts when the car detects another car approaching from the rear when a passenger opens the door.

You can pay extra for Relaxation Comfort Seats in the front, depending on the model version and the market where it’s offered. The interior is stylish and available in four color tones, with Dual Color Ambient Lighting to be chosen from a 64-color scheme. A nice gadget is the Speed Sync Lighting mode, adjusting the intensity of that lighting to the car’s speed.

In that field, the Ioniq 6 has an extended package of driver assistance and collision-avoiding systems. The ‘SEL’ and ‘Limited’ trim versions offer improved functions for ‘Junction Crossing’, ‘Lane-Changing Oncoming’, and ‘Lane-Changing Side’, combined with ‘Evasive Steering Assist’.

That’s a mouthful of technical terms for a technology that lets the car steer away automatically from a threatening collision at a junction with another car approaching from the left or right, or an oncoming car when you want to change lanes, for instance.