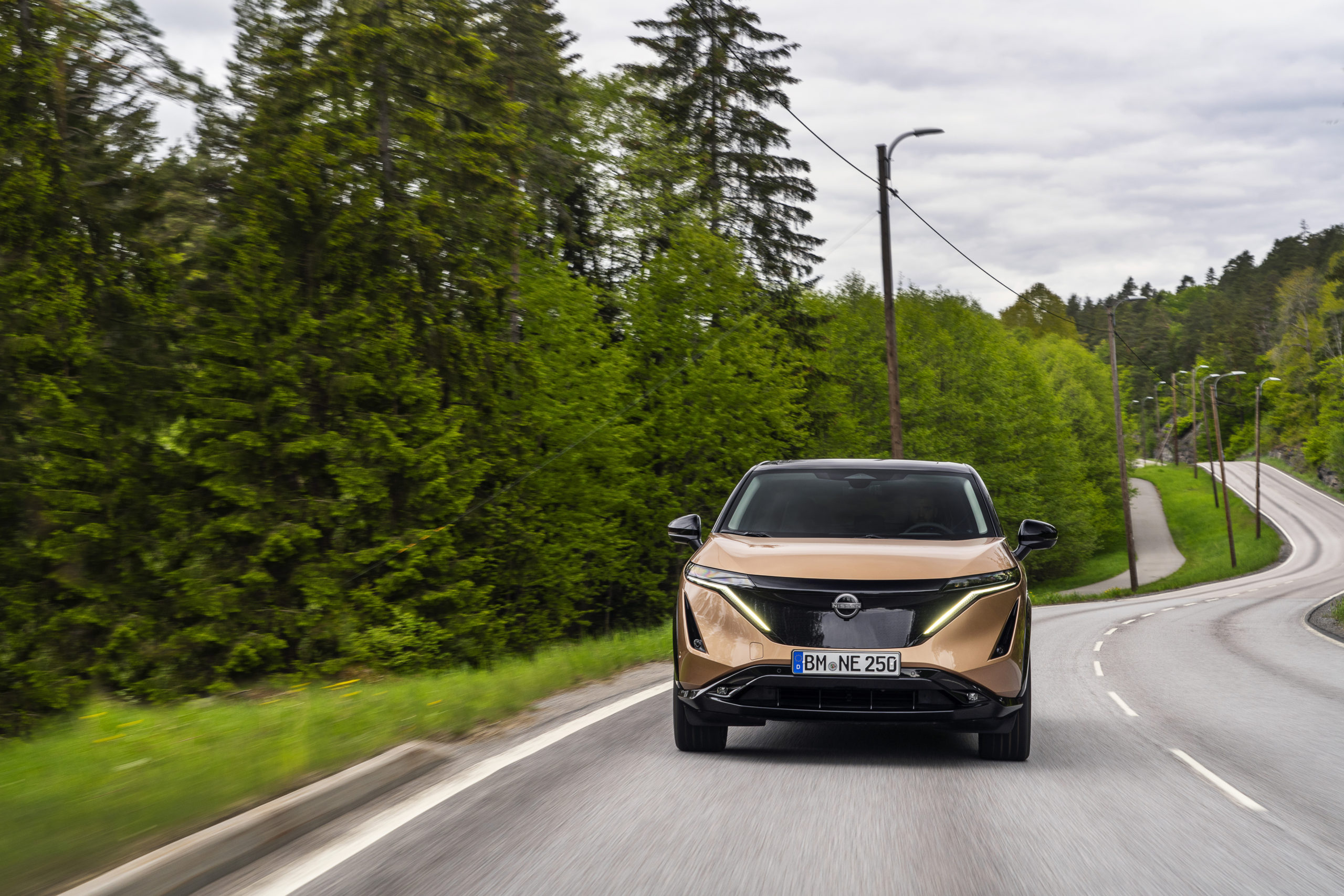 On Swedish roads where you’re ‘invited’ to drive like a tender family man by the ever changing speed limits and numerous speed traps, Ariya turned out to be very economical with energy: 13.5 kWh/100 km /Nissan

When Nissan, one of the pioneers of electric driving with the Leaf, says that the new Ariya is the stepping stone to a whole new range of EVs, we are all ears. Driving it on Swedish roads around Stockholm, it reveals itself as a better version – roomier, sharper, quieter, more efficient, and even more good-looking – of that other hit number, the classic Qashqai.

This Qashqai was a trendsetter when Nissan launched it in 2007 as the world’s first so-called crossover, a sleeker version of the then SUVs, and created a whole new segment. The Ariya continues that tradition as a coupé-crossover or C-SUV but is positioned above the new electrified Qashqai e-Power as a fully electric alternative.

More space in the cockpit

Ariya is built on the new CMF-EV platform Nissan developed with Renault for the Alliance. It’s a dedicated EV architecture for a whole range of vehicles to come, based on the experience with 600 000 Nissan Leafs sold, of which half that number in Europe. Nissan claims that first electric car was and still is a success with 98% customer satisfaction.

With a length of 4 595 mm, Ariya is 17 cm longer than Qashqai and offers more internal space with a wheelbase of 2 775 mm, compared to 2 665 mm for the other. Despite the battery pack under its floor and while keeping the same ground clearance, Ariya is only 35 millimeters taller than Qashqai (1 660 mm compared to 1 625 mm).

Better view on the road?

Getting behind the wheel, you’ll notice the (excellent) seating position above the flat floor is relatively high. Nissan says its customers like this SUV feature providing a better view of the road ahead.

Actually, this commonly used argument to sell SUVs is bullshit as you won’t see further than the SUV driving in front of you, and it will cost you unnecessary energy. But this perception of the general public is hard to bring down.

The dashboard with dual 12,3-inch screens is frugal but efficient, with the most used physical buttons replaced by ‘touch’ buttons with haptic feedback. This works fine, unless in bright sunlight when finding the correct icon is sometimes challenging.

The central console with the drive selector is a Nissan unique feature. Listening to comments of its Leaf and Qashqai customers during the development phase, Nissan engineers created a console that can move electrically back and forward to find the best position to rest your arm and grab the gear lever.

In front of it, in the lower dashboard, you’ll find a little drawer that slides open electrically, operated with haptic buttons on the console. A nice gadget, challenging to determine how useful this is.

Range of 403 km with basic version

A range of 403 km turned out to be a realistic figure, considering the board computer indicated an average energy consumption of 13.5 kWh during our test drive of approximately 190 km. That’s a remarkably good figure for a C-SUV of nearly two tons and a ‘boxy’ drag coefficient of around 0.30 (compared to 0.20 of the Mercedes EQS sedan, for instance).

But on Swedish country roads with speed limits constantly changing from 70 to 50, 40 or 30 km per hour, and numerous speed traps, you’re ‘invited’ to drive like a tender family man. In Belgium with its more hectic traffic or even in Sweden in the winter, that figure could disappointedly be higher.

Charging the battery at home at the standard AC maximum of 7,5 kW will take you ten hours. With an optional onboard 22 kW AC charger, you could cut that to 3 hours and 30 minutes. DC fast charging up to 130 kW is possible, providing charging from 20 to 80% and adding 267 km of range in 30 minutes.

In the Ariya, Nissan drops the Japanese Chademo from the Leaf for the European CCS standard plug. That makes V2G (Vehicle to Grid) a lost option, at least in theory, as feeding electricity back to the grid isn’t yet possible in Belgium.

The 2WD Evolve version we tested features, among others, a 10,8-inch head-up display, a BOSE® audio system with ten speakers, and an intelligent Rear View Mirror with a camera.

The latter is another example of a questionable gadget, as the camera picture replacing the classic mirror shows the cars behind you appearing closer than they actually are. The screen isn’t always clearly visible in bright sunlight due to reflections.

Driving the Ariya is a pleasant experience and an excellent example of how an electric car, in most cases, outclasses its siblings with a combustion engine. It offers comfortable one-pedal driving, setting the ‘e-pedal’ function to regenerate brake energy into extra range. This way, you only use the throttle pedal to accelerate and slow down, using the brake pedal only from 10 km/h to full stop.

For instance, Nissan put a lot of effort into making the Ariya relaxingly silent by using double glazing. Although, on rougher asphalt, the rolling noises of the tires are sometimes quite explicitly present. Most non-EV drivers think they will miss the ‘roaring engine sound’ of their ICE car, but in practice, the silence of an EV is a comfort factor you’ll learn to appreciate quickly.

The Ariya, like all EVs, is capable of swiftly accelerating when needed, although no racer in this case with 7,5 seconds from 0-100 km/h. The top speed is limited to 160 km/h. Despite the car’s considerable weight (1 980 kg), the low gravity point with the battery centrally underneath provides good, swift handling and precise steering.

All advanced driver aid systems (ADAS) are available under the Nissan ProPILOT with Navi-link package. The latter lets you set the adaptive cruise control to use the data of the navigation system to anticipate hazards ahead, like approaching a roundabout.

The car will slow down automatically to an appropriate speed, for instance. That is what we were told by Nissan and some colleagues who experienced it. We didn’t manage to find how to activate that in our test car despite several calls for assistance from Nissan staff and wisely decided to use the brake ourselves to avoid a catastrophe.

As with most of these modern software applications in today’s cars, prepare for a steep learning effort to get it all figured out when your new car is delivered. Once you order it, you’ll have about six months to prepare, waiting for delivery, Nissan Belgium promises.