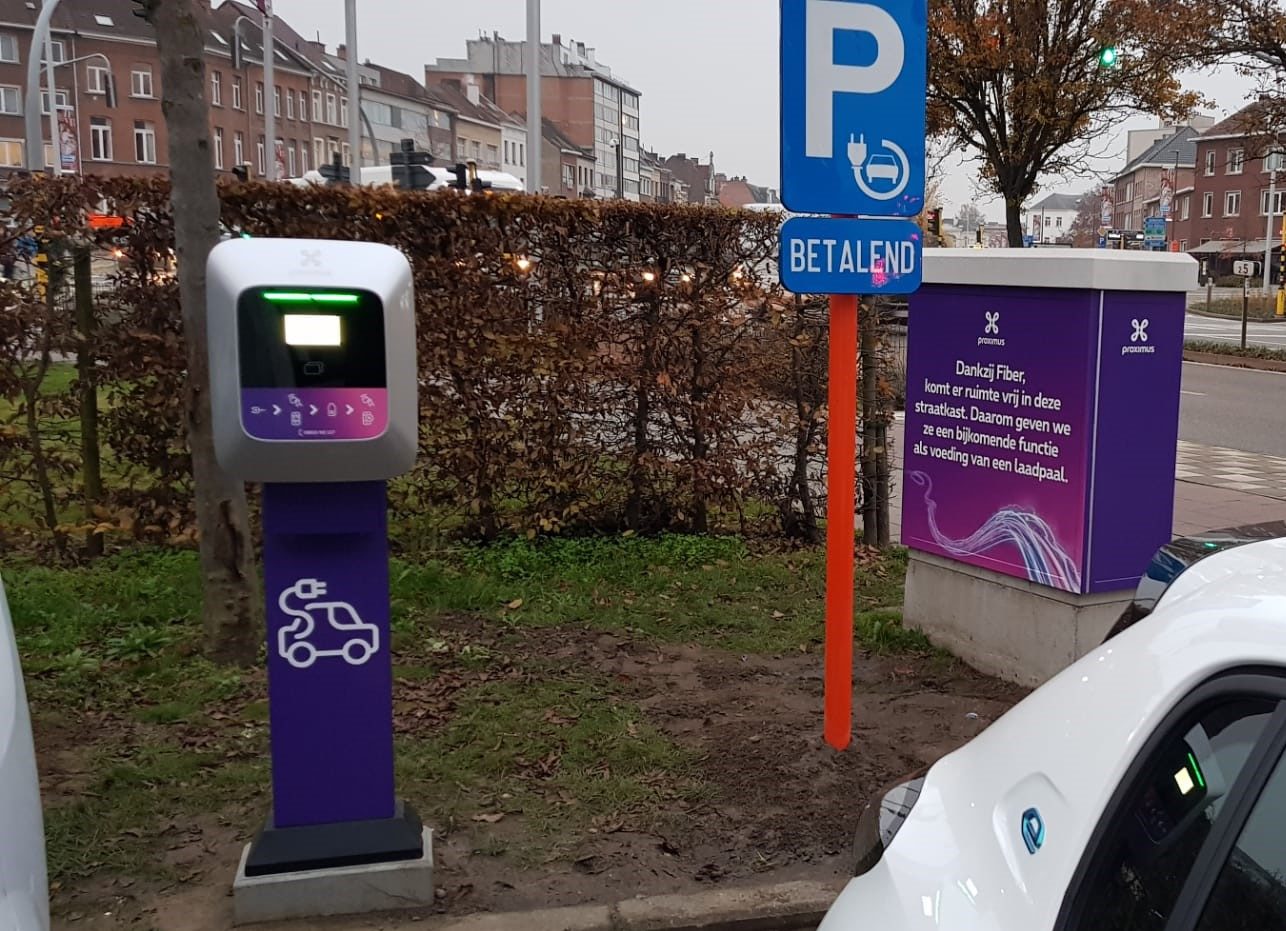 After a successful pilot in Mechelen with seven cable distribution cabinets used to offer two EV charging points, Proximus is to roll out chargers at 4 000 more locations to start /Proximus

Belgian telecom operator Proximus is planning to roll out 15 000 new EV charging points in total, of which 8 000 at 4 000 existing cable distribution boxes in the public domain and the remaining 7 000 at semi-public parking lots with selected partners. EV charging-as-a-service will now become part of its business model.

The company announced the latter on Friday after a successful evaluation of the pilot project in Mechelen, where Proximus installed seven charging stations, each with two charging points at street cabins. In 2022, another 25 public installations will follow, starting with five in Oudenaarde.

Fiber network roll-out is an opportunity

Proximus sees an opportunity in the growing need for EV charging stations that fit in well with the ongoing roll-out of its fiber network in Belgium to replace the older copper wiring. This frees space in the street cabinets that can be useful.

As these typical grey plastic boxes get partly obsolete due to the new fiberglass network, this conversion is relatively easy after upgrading the power supply to 400 Volts.

“Proximus intends to re-use this spare capacity as part of its commitment to a sustainable society. These street cabinets also provide interesting advantages. On the one hand, the existing infrastructure allows the cabinets to be easily converted into charging points: electricity is already present, which limits the excavation work.”

“On the other hand, they are often located in attractive city center locations, which makes it possible to provide access to residents who do not have charging infrastructure at home.”

The first remodeled EV charger was commissioned in November 2021 at the Ragheno Square in Mechelen. It can accommodate two EVs simultaneously at a standard 11 kW for public AC chargers. Proximus has some 28 000 phone distribution boxes spread over the country and estimates it could remodel 4 000 of them, creating 8 000 EV charging points.

As these grey phone boxes are not always placed at locations that provide two parking spots, only a tiny part of the old network is suitable for conversion. In Brussels, for instance, there is a problem, as the city relies on an old 240V electricity grid in many locations.

Last year, at the start of the pilot project in Mechelen, Proximus said it has no ambition to become an EV charging network operator but sees this as a public service as a former state-owned company.

Now, CEO Guillaume Boutin sings another tune. “We want to take it a step further and exploit other synergies in this market. With our current expertise as a digital player and in providing uninterrupted connectivity throughout our network, we hope to offer, with an appropriate partner, the best charging experience in the market.”

For this, Proximus looks further than its grey distribution cabinets and is talking “with several potential partners who are prepared to develop a common vision for fast expansion.”

The intention is to expand the EV charging points by another 7 000 to semi-public places like parking lots of hospitals, sports facilities, or cultural centers and companies to offer ‘charging-as-a-service’.

“This will enable companies to offer charging stations to their employees and customers, as well as to the general public, before and after opening hours,” Proximus says. By the end of the summer, Proximus hopes to announce the partnership officially.