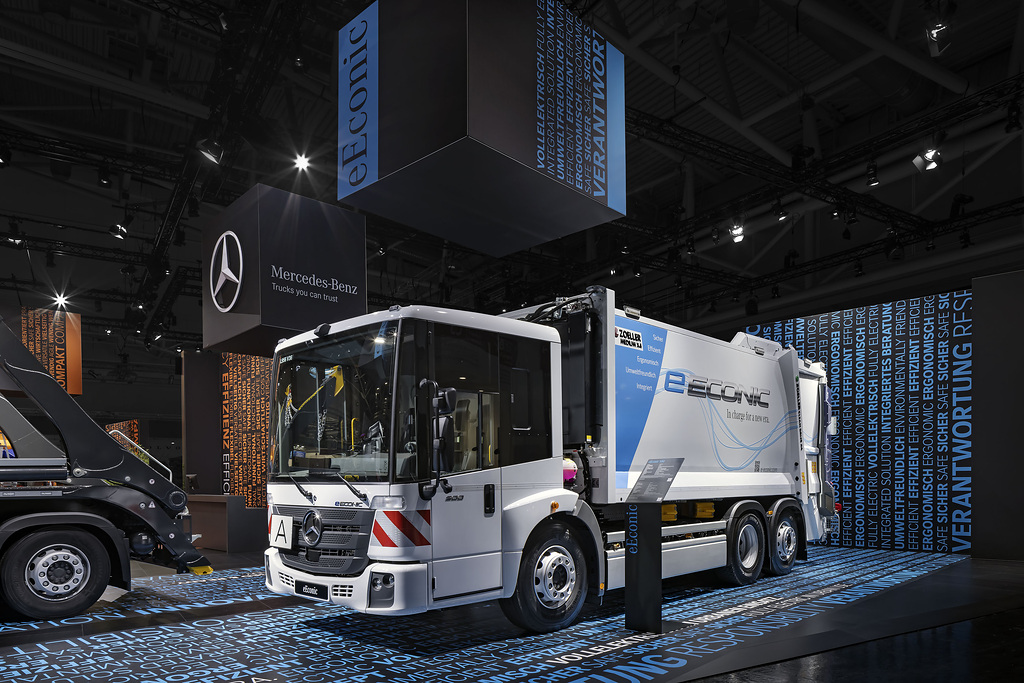 Mercedes-Benz Trucks started at its Wörth am Rhein plant in Germany, producing the eEconic, its second fully battery-electric truck next to the eActros. The key technical specifications of the eEconic are mainly identical to those of the eActros, but aimed at municipal use or last-mile delivery, in particular, the truck builder says.

The eEconic was showcased for the first time at a trade fair at this year’s IFAT in Munich, a trade fair for water, sewage, waste, and raw materials management. Mercedes-Benz Trucks sees this electric truck as the ideal successor of today’s waste collection vehicle fleet, capable of covering almost all inner-city routes on one battery charge.

At the IFAT, an eEconic was shown with a waste collection body from Zöller: the Medium X4 22.5 ‘Clean Drive’. The Clean Drive body, specially designed for all-electric chassis with a high-voltage interface, consists of an electrified collection box (22,3 cubic meters capacity) with two internal electric motors, including directly-mounted hydraulic pumps, a converter, and a rectifier, the press release shows.

The first production eEconic built will go to Urbaser A/S, a Danish waste disposal company. Mercedes-Benz Trucks has set up practical trials with customers since May 2022, and the development of the truck was done in close dialogue with them.

In Wörth, the eEconic is manufactured on the Special Trucks assembly line alongside the trucks powered by internal combustion engines. The electric equipment the eEconic gets – just like the eActros – in the Future Truck Center.

Mercedes-Benz Trucks says it aims to sell only CO2-neutral vehicles in its main sales regions in North America, Europe, and Japan from 2039 onward. For this, it is betting on two primary technologies: battery-electric trucks and fuel cell trucks on hydrogen.