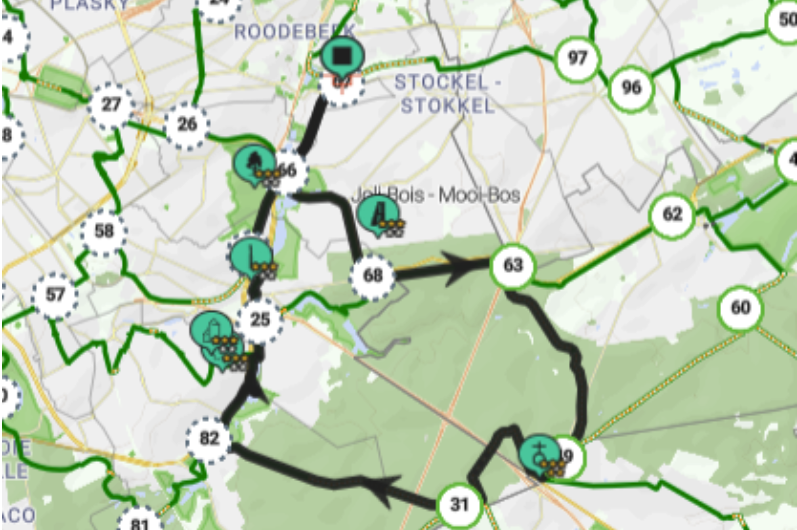 The system is easy and comfortable: users can simply map a route by combining the desired numbered junctions /bikenode.brussels

In January this year, the Brussels Minister for Mobility, Elke Van den Brandt (Groen), announced that the Brussels Region would get its own bicycle junction network. Now, the project is entering a new phase. The fieldwork is finished, and signposting is ready to begin. If all goes well, all road signs – some 2 000 – should be installed by the end of the year.

Visit Brussels, the agency for tourism responsible for the rollout of the bicycle junction network will coordinate the installation of the signs. In addition, the agency will manage and present the bicycle network on its website. It will also become available on existing route apps.

The idea of having a bicycle network in the Belgian capital, like in the rest of the country, originated in 2020. Volunteers developed a digital bicycle network of junctions that covered about 250 km in the Brussels Region, with loops connected with Flemish Brabant’s network. BikeNode.Brussels, as the project was called, was only available in digital form on several apps. Road signs were missing.

In the meantime, the project is transferred to the Brussels Region for the rollout of the road signs. The original BikeNode.Brussels project now forms the basis of an official and sustainable bicycle project.

Many provinces in Belgium have similar extended bicycle networks and bicycle junctions. The system is easy and comfortable: users can map a route by combining the desired numbered connections.

Once on the bike, you just follow the sequence of the chosen numbers. People don’t need a smartphone or navigation system at all. Thanks to the simple and recognizable road signs, anyone can easily follow the desired route, enjoy the ride, and discover the city.

The best evidence of the ever-growing popularity of cycling is the many projects and investments in bicycle infrastructure. For example, on Tuesday, Flemish Mobility Minister Lydia Peeters (Open Vld) announced the construction of a new bicycle track between Zellik and Dilbeek.

It will run parallel with the Brussels beltway between the N8 in Dilbeek and bicycle highway F212 in Zellik and offer cyclists a faster and safer bikeway. Construction works are expected to start in 2024.