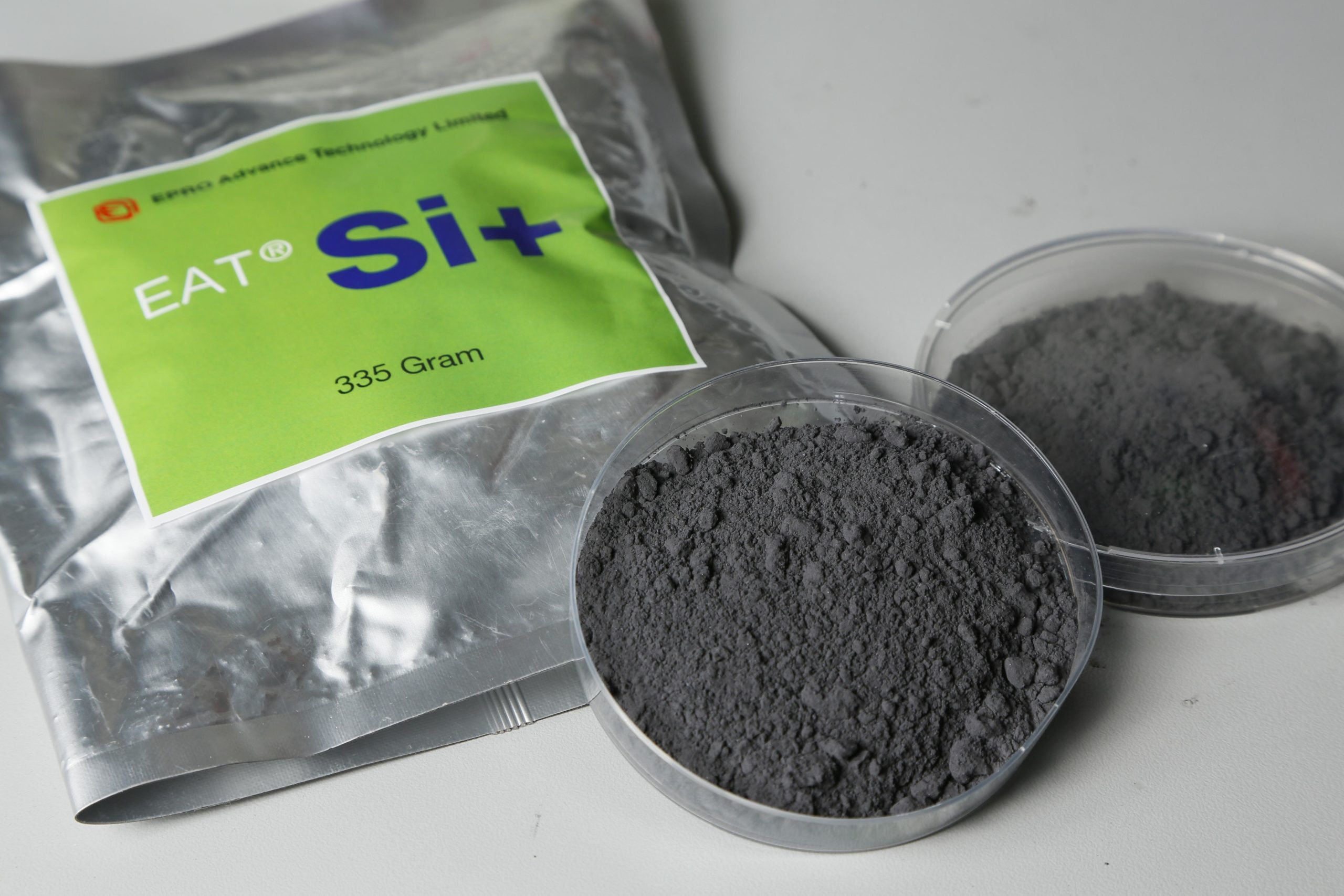 It’s no science fiction, as shown in a lab setting in a company video. The porous silicon material created by EAT, called Si+, has the potential to produce green hydrogen anywhere in the world, eliminating the need for complex H2 transport infrastructure. With the powder that can be transported in containers, a hydrogen filling station can produce on-site what it needs.

Getting us from the oil drip

‘Green or pure hydrogen’ is seen as one of the most promising solutions to get us from the oil drip for our energy needs. But to make it from water by electrolysis, the most used method today, you need vast amounts of green electricity from renewable sources. In that process, 30% of energy is lost, which makes ‘green’ hydrogen today quite expensive.

To make the Si+ powder, EAT uses metallurgical grade silicon (MG Si), produced from something as vastly abundant as sand, combined with a carbon source and electricity from renewable sources. The silicon can also be sourced from recycled solar panels that otherwise would end in a landfill, the company says. In the process, no CO2 is emitted.

The process for this so-called ‘Si+ Solid State Hydrogen’ developed by Lau Lee Cheung, co-founder and current chairman of EAT, and his son Albert, was patented already in 2016 but showcased for the first time in January 2020 at the Las Vegas Consumer Electronics Show.

The 500 ml reactor with dissolved Si+ powder shown was capable of powering an 8 W fuel cell, which in turn powered an electric light. A second demo kit with a 500 ml reactor shown in October was capable of powering a 20 W fuel cell. Today, EAT says it has scale-up prototypes to power a 5 kW fuel cell, which is perfect for domestic use, and a 150-liter reactor producing 3 kg hydrogen per day.

“Unlike other solid state hydrogen compounds, Si+ doesn’t store hydrogen. That’s because the hydrogen comes from the water that is added later. This makes Si+ ultra–safe compared with other ‘hydrogen carrying’ materials,” EAT CEO Albert Lau says in a webcast. The discovery of the material’s hydrogen-producing capabilities was rather a coincidence than a Eureka moment.

“At EAT, we started off developing high purity silicon for solar use. And over the years, we discovered that we had a technology that meant so much more than that. We discovered the hydrogen generation properties of silicon at least a year before the first academic paper, which was published in 2013. But the environment was not ready for hydrogen at that time,” he adds.

“The benign silicates produced from the hydrogen generation are used directly for the manufacturing of zeolites (used in chemical industry e.n.) and green cement, as part of our zero–waste process.” Green cement is a form of cement produced with the help of a ‘carbon-negative manufacturing process’.

Ease of storage and transportation

The makers say the primary benefit of Si+ powder is the ease of storage or transportation. As an example, they take the storage of 100 kg of hydrogen. If stored in gas bottles at 300 bar at 25°C (like in hydrogen trucks), you would need a volume of 4 200 liters or 70 bottles.

To have it in liquid form at atmospheric pressure, cryogenic liquid H₂ storage, the gas has to be cooled to minus 253°C to get 1 400 liters of volume. With Si+, the Hong Kong men claim, you would need 300 liters of Si+ powder and 900 liters of water to produce the hydrogen locally. Very economically and with no risks. 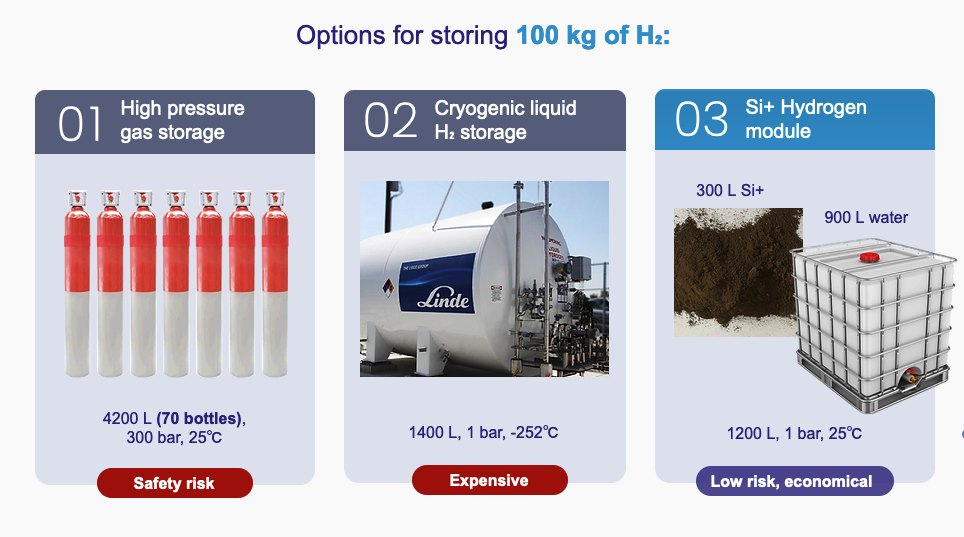 If you take it to a bigger scale, to transport it worldwide, you could use today’s container ships instead of expensive specially developed hydrogen ships built by Kawasaki Heavy Industries, which can carry 88,5 tons of hydrogen in liquified form. This ‘solid state’ hydrogen’ would only need 33 twenty-foot containers of 2,7 tons to transport the same amount of hydrogen safely.

According to Albert Lau, his company is now ready to scale up production. EAT has established commercial and strategic partnerships with organizations in Australia, China, Europe, Hong Kong, and Japan.

In 2023, it claims, it will start delivering domestic generators for electricity production in Europe and commercial gensets for the building industry in Hong Kong. According to Albert Lau, The Hong Kong Airport Authority is looking into replacing its backup gensets with Si+ gensets and building a Si+ Hydrogen Refuelling Station at the Hong Kong International Airport.

“Si+ provides a reliable energy source in contrast to intermittent renewable energy sources. It is the first energy storage material with grid parity. Si+ technology has the potential to advance the hydrogen economy by decades,” Lau added.

Almost too good to be true? One thing missing in the company’s exposé is pricing… To be continued, for sure.