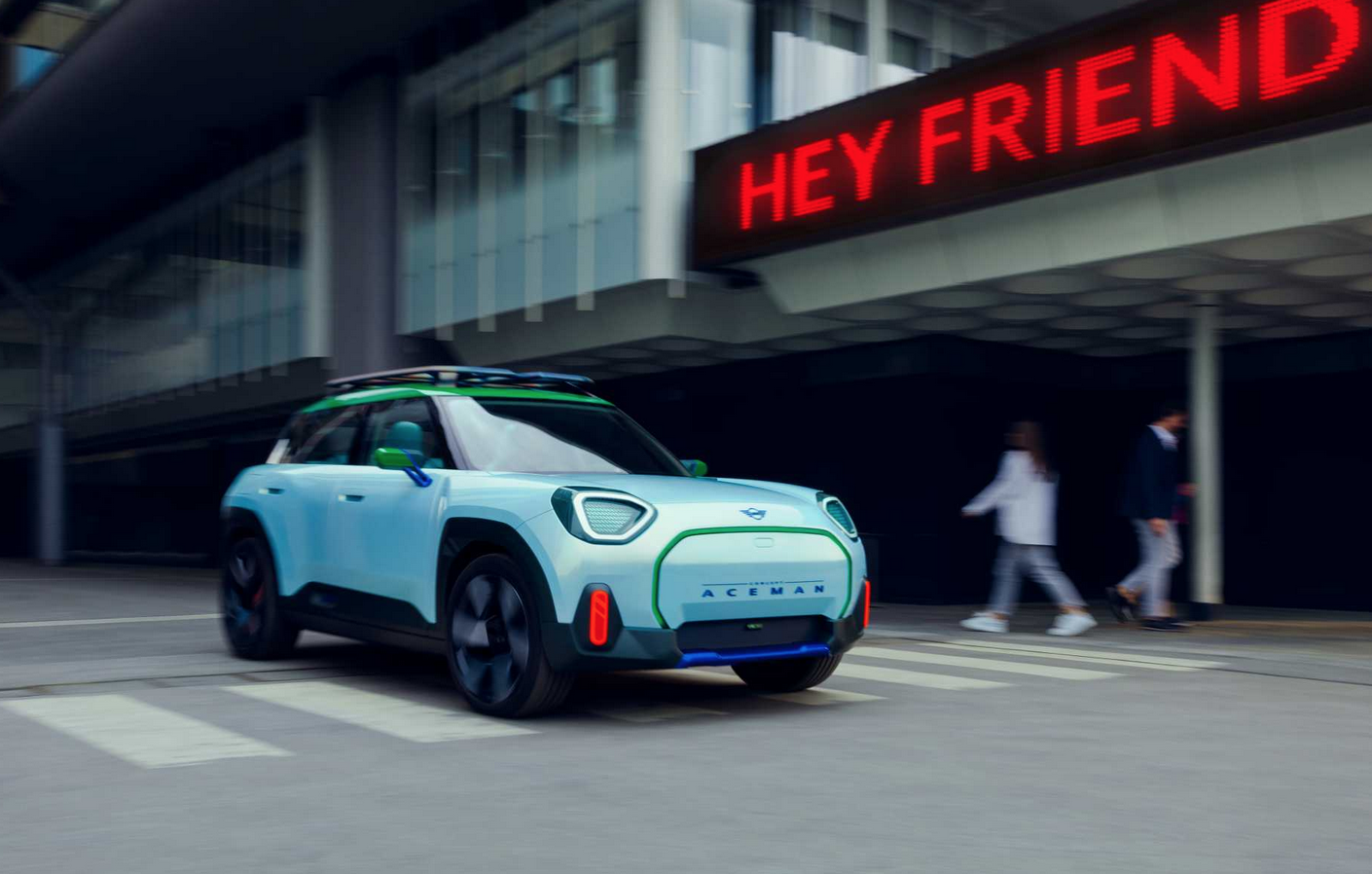 The British brand Mini, part of the BMW Group, presents the Concept Aceman, an initial preview of its future model generation’s new design. In this concept car, Mini wants to show design-based and technological innovations that outline the brand-typical driving pleasure of the future.

“The Mini Concept Aceman provides an initial glimpse of a completely new vehicle, bridging the space between the Mini Cooper and the Mini Countryman in the model family’s future,” says Stefanie Wurst, Head of the Mini Brand. “This concept car reflects how Mini is reinventing itself for its all-electric future and what the brand stands for: an electrified go-kart feel, an immersive digital experience, and a strong focus on a minimal environmental footprint.”

In the next model generation, the Mini Cooper in the iconic three-door body shape, which has been reinterpreted many times over its entire 60-plus-year history, will be joined by a crossover model for the first time.

This first Mini crossover model for the premium small cars segment wants to be striking, with purely electric drive, a clear and pared-back that has been dubbed “Charismatic Simplicity”, a new digital interior space experience and a material concept that uses no leather or chrome.

“The design language of the Mini Concept Aceman heralds the beginning of a new design era for Mini,” explains Adrian van Hooydonk, Head of BMW Group Design. “Design features typical of the Mini brand have always been unmistakable,” van Hooydonk continues. “We are returning to these now, but at the same time consistently combining them with innovative technology. With this approach, we are redeveloping the Mini design icons, with all their analog strengths, for the digital future.”

Along with the clear and reduced exterior and interior design, the holistic user experience of light, movement, interaction, and sound are combined to define this style. Surfaces constructed from knitted recycled textile with fresh color contrasts combine with seamless digital controls with a new OLED display as the central interface.

“The purely electric vehicle concept means the design can again be geared more toward Mini’s traditional basic values, in terms of the principle of using space creatively,” says Oliver Heilmer, Head of Mini Design. “This creates models that take up little space on the road while offering even more comfort, versatility, and emotion on the inside than ever before.”

A functional two-box design with short overhangs tries to create maximum space for occupants and luggage on a minimal surface area. The Mini Concept Aceman has four doors and a large trunk lid with interior seating for five. It also has the proportions one would expect of the brand, with an exterior length of 4,05 meters, a width of 1,99 meters, and a height of 1,59 meters.

The exterior surface design is combined with signature features like, for example, the distinctive Union Jack design, acknowledging the brand’s British roots, seen in both the rear light graphic and on the roof rack. In addition, an expressive paint finish underlines Aceman’s character for the body and a contrasting color for the roof.

The concept car’s cockpit is consistently reduced to the bare essentials, just as Alec Issigonis, the designer of the classic Mini, had in mind in 1959. He designed an interior that, in addition to the seats, steering wheel, and gear lever, needed nothing more than a central round instrument and toggle switch bar to experience unrivaled driving pleasure.

“In the interior of the Mini Concept Aceman, we have concentrated on a simplistic appearance in combination with premium materials and welcoming colors. Digitization enables us to make do with few operating elements and simultaneously maximize the experience in a way characteristic of Mini,” explains Oliver Heilmer. “The entire design is all about offering occupants a holistic experience in the interior space.”

The dashboard, extending particularly far into the interior in the central area, forms the perfect setting for the central interface, which combines all the functions of the instrument cluster and the onboard monitor as a round OLED display. True to its traditions, a toggle switch bar is set below the large screen. Touch control using state-of-the-art digitalization and analog functionality with physical switches are combined in what is called “the Mini way”.

Mini appears to be the world’s first car manufacturer to present a circular OLED display that takes up the entire surface of the central interface. OLED technology gives the display a high-quality appearance and can display strong contrasts and deep black. In addition, experience modes generate possibilities to individualize and personalize the driving experience. There’s a choice between personal, pop-up, and vivid modes.

No chrome or leather

Chrome elements are completely dispensed with – not only on the exterior but also inside. Instead, the dashboard support structure creates its highlight in the interior, with its iridescent coating matching the roof support, for example.

Like the seats, door panels, and other interior surfaces, the steering wheel is also leather-free. Instead, the steering wheel rim is laminated with dark green velvet velour for a pleasant feel. The multifunction buttons are integrated under backlit textile surfaces. The ‘Aceman’ lettering and a robust strap are forming the six o’clock spoke of the steering wheel.

It’s also telling that the Mini Concept Aceman will be publicly presented for the first time at the world’s largest gaming event, Gamescom 2022, in Cologne. From 24 to 28 August 2022, gaming fans will convene in Cologne’s Kölnmesse venue to experience games and offerings from various developers and publishers. 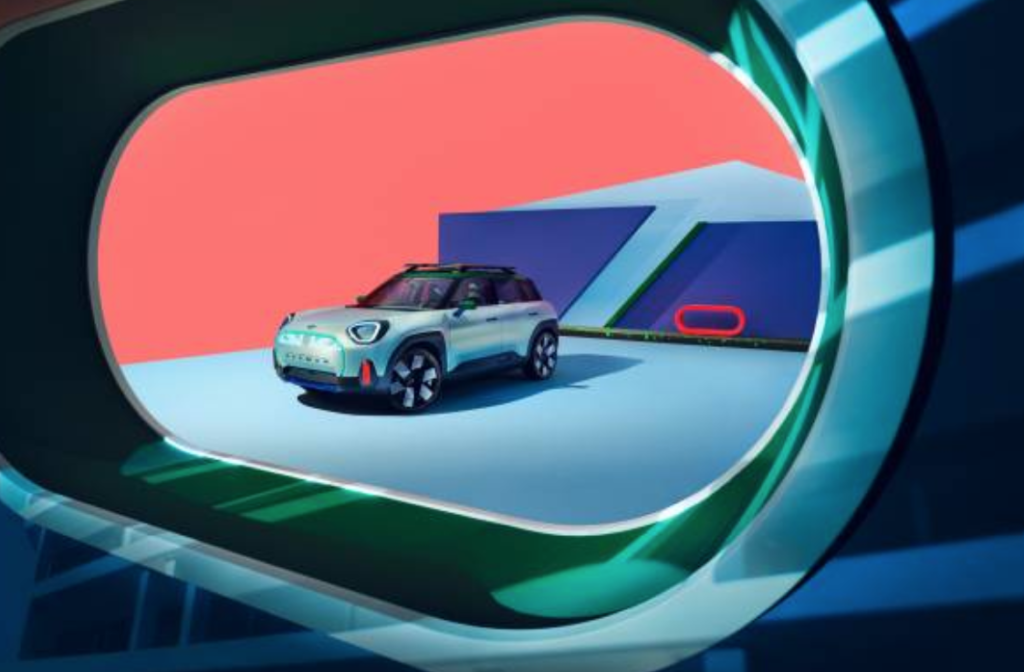 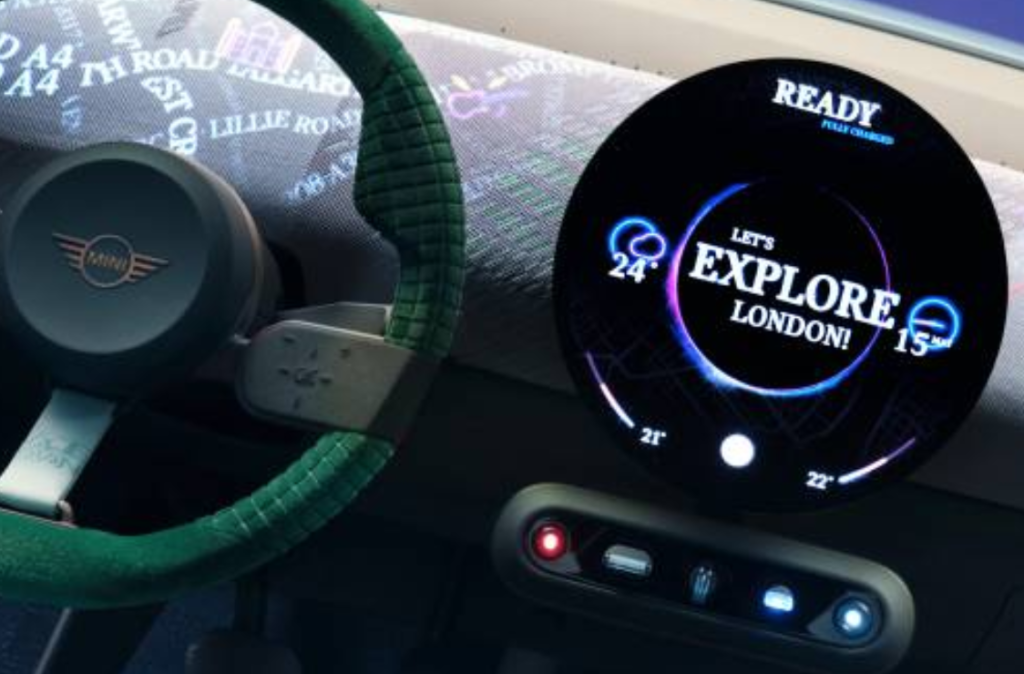 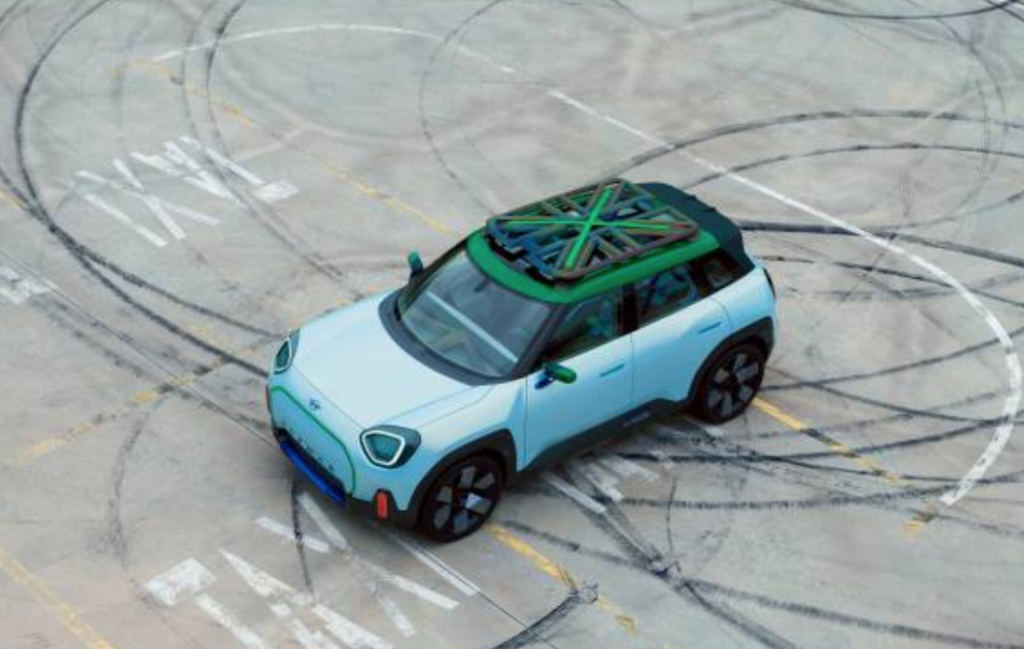 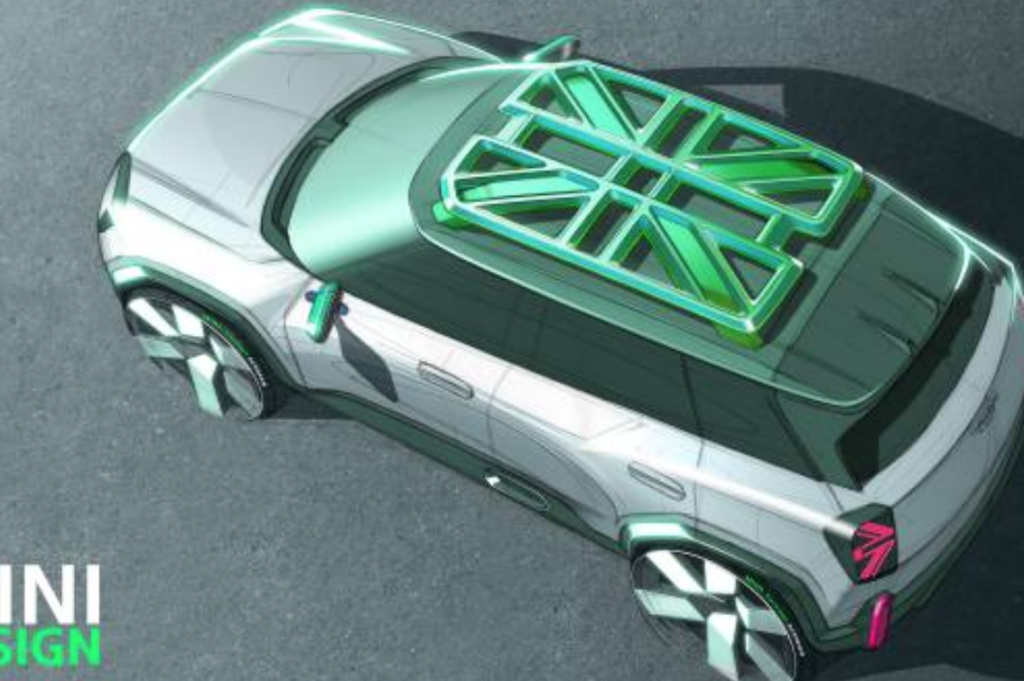