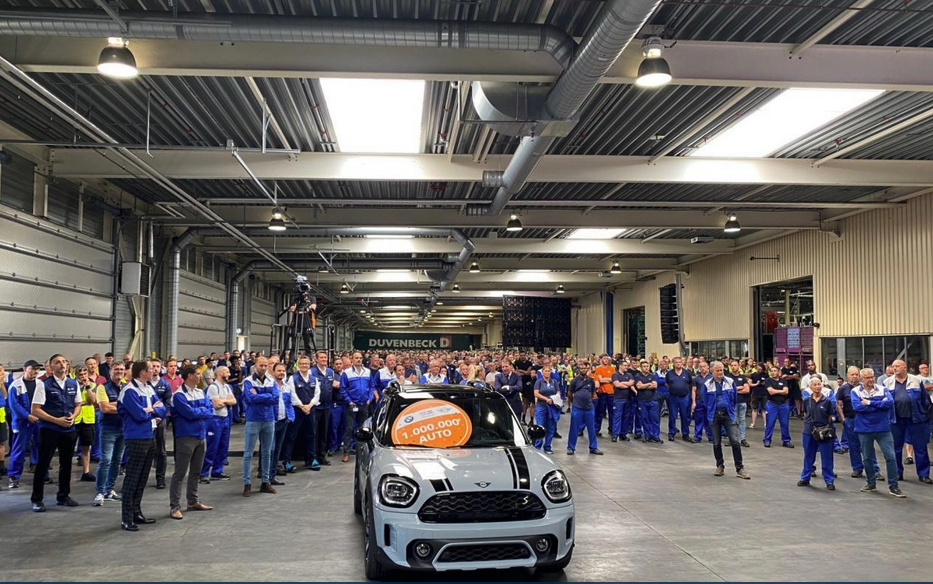 On June 15th 2022, the millionth vehicle produced for BMW Group rolled of the assembly line at VDL Nedcar in Born, in the southern Netherlands /VDL Nedcar

Dutch contract manufacturer VDL Nedcar in Born will build MINIs for BMW for four months longer than initially agreed, until the 1st of March 2024. The province of Limburg broke the news BMW signed a new contract with VDL to postpone the originally fixed end date of November 2023.

Meanwhile, according to the same source, the negotiations with other carmakers are in a ‘decisive phase’. That could refer to the talks with American electric pickup manufacturer Rivian, but the latter just announced structural layoffs in its home country to cut costs. On the other hand, VDL Nedcar wants to ‘diversify’ further and become a ‘center for mobility and innovation’.

VDL Nedcar is the Netherlands’ only independent car manufacturer, employing some 4 200 people in Born, near the Belgian border. In June this year, the factory delivered the one-millionth vehicle, a MINI, for the BMW Group. Today, it has a maximum capacity of 200 000 cars per year.

Since its opening in 1967, the factory has produced cars with different brands (DAF, Volvo, Smart, Mitsubishi, MINI, and BMW). In 2021 it became part of the family-owned bus, coaches, and finished products manufacturer VDL Group in Eindhoven.

Since 2014 it has been building MINIs for BMW, starting with the three-door Hatch. In 2015 the MINI convertible was added, followed by the MINI Countryman (including the PHEV), and since 2017 also, the BMW X1. When BMW announced it would stop production in the Netherlands in 2023, VDL Nedcar had to search for new contracts.

The Mini Electric is assembled at Plant Oxford in the UK alongside combustion engine-powered MINI hatchbacks. MINI is now developing its fifth generation and will have an electric version just like the current generation.

The emphasis seems to be on this zero-emission version, as the manufacturer ran the arctic winter tests with the new e-MINI in Arjeplog, Sweden, a few months ago.  Meanwhile, it was confirmed Oxford would be building this new electric MINI too.

It is not illogical that the manufacturer is prioritizing the development of the electric variant, as 18% of all Minis sold in 2021 already had an electric drive, and demand for EV and plug-in hybrid models continues to rise. A third of orders today are already for the full electric three-door version. The essential MINI markets are Great Britain, Germany, and China.

Nedcar has been talking for some months already to American electric pickup maker Rivian, among others,  to offer production capacity in Europe. A Dutch province parliament member officially confirmed the rumor in December 2021.

A week before the rumors about Rivian were confirmed, another American electric start-up, Canoo, announced it dropped its deal with VDL Nedcar to build its Lifestyle Car in Born.

Last week, Rivian announced that it is laying off 6% of its 14 000 employees to focus on its electric pickup truck production ramp. Since the beginning of production, Rivian has built just under 8 000 of its electric pickups and delivery vans but aims to bring that up to 25 000 by the end of this year.

Rivian, based in Irvine, California, produces the R1T electric pickup in Normal, Illinois. It announced earlier it will set up a second factory in Morgan and Walton Counties in Georgia, east of Atlanta, employing by 2024 another 7 500 people. No word so far about a possible contract builder in the Netherlands.

For VDL Nedcar to be able to sign new deals as a Vehicle Contract Manufacturer, it has to expand its 330 000 m2 production facilities in Born. In February, it started to cut down the first trees of the ‘Sterrebos’, which had to disappear for the car factory’s expansion. This after more than a week of skirmishes by environmentalists with the police.

The Sterrebos forest on the factory’s ground is a seven hectares bewildered piece of woodland planted two centuries ago on the rural estate of the Wolfrath castle for lodging. Nedcar needs the space occupied by the forest for expanding its factory with a second assembly line to attract other brands and to build them alongside the BMWs and MINIs until 2024.