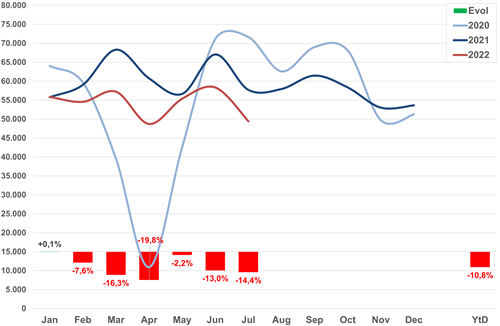 This graph shows the evolution of the second-hand car registrations /traxio.be

According to mobility federation Traxio, sales of second-hand cars in Belgium further declined in July after relatively better results in May. In July, 49 406 used cars were registered, a decrease of 14,4% (-8 292 units) and even a decline of 31,0% compared to 2020.

Over the year’s first seven months, the second-hand market regressed by 10,8%. On the other hand, registration of new cars performed better (-5,1%). The most popular used car brand is Volkswagen, followed by BMW, Mercedes, Opel, and Peugeot.

Yearning for holiday by air

A possible explanation for the regressing used car market is that fewer people opt for a car holiday after two years of corona restrictions. Some prefer to stay at home. Others, on the contrary, yearn for a real holiday by air.

Still, the provisioning of the second-hand market remains difficult, especially for young cars (< 7 years) with a limited number of kilometers (< 100 000 km) on the odometer.

As a consequence, prices remain high. The median age of second-hand registrations went up to seven years and eleven months. Older used cars often end up in the former Eastern Bloc.

According to Traxio, there is a further decline in the popularity of diesel engines (40,7%) compared to gasoline (51,9%); other fuel types are slowly but steadily increasing to 7,4%. The number of hybrid vehicles (all types of electrified vehicles with thermal engines and electric support) for the first time exceeded 5% (5,4%, to be precise).

The second-hand market mainly focuses on private individuals (89% of registrations). The share of second-hand company cars represents hardly 10%. Flanders is traditionally the largest market for used vehicles (50%), compared to Wallonia (37%) and Brussels (10%).