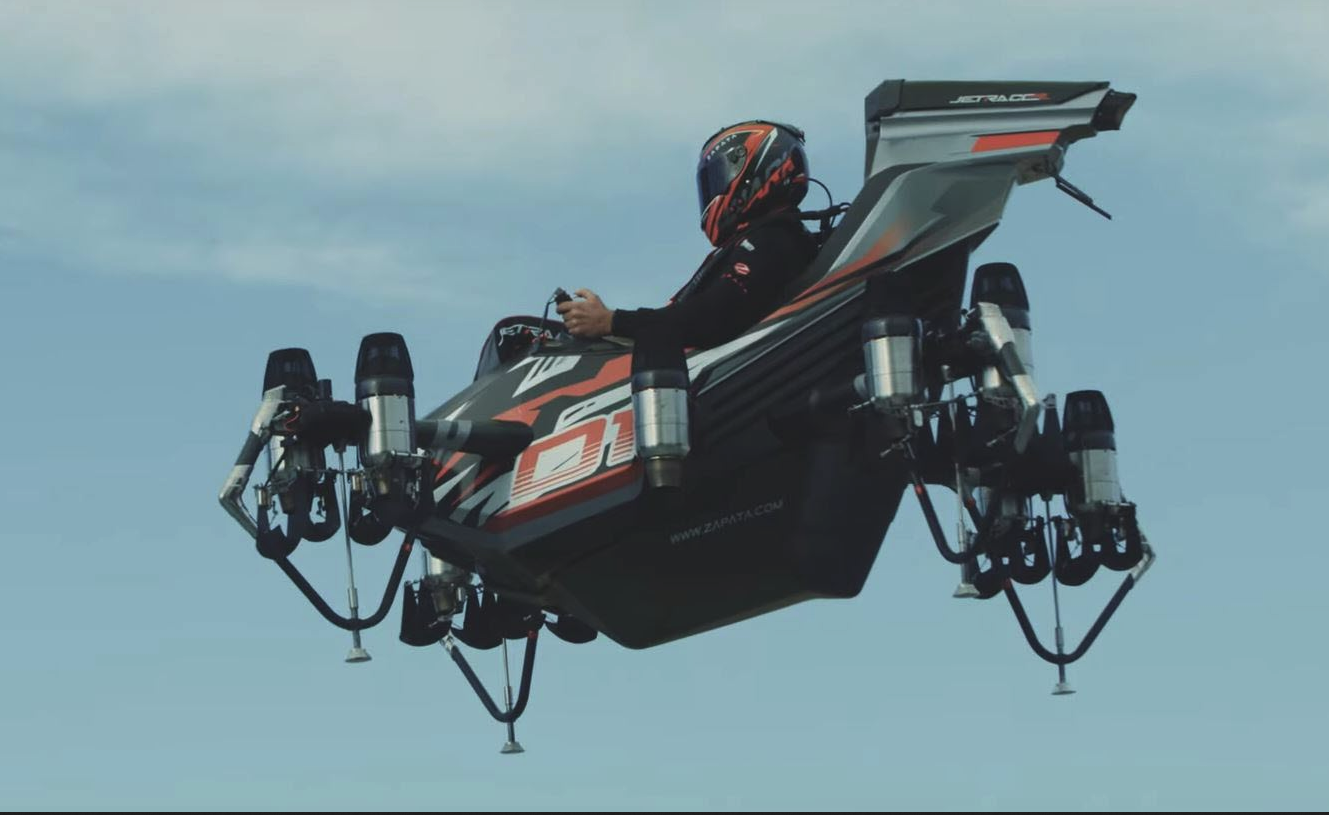 Three years after flying over the Channel with a self-developed ‘Flyboard’, French former jet-ski world champion Franky Zapata has demonstrated his ‘flying car’, the JetRacer. The drone-like VTOL (vertical take-off and landing) aircraft with one seat is propelled by ten micro turbo-jet engines. It can reach an altitude of 3 000 meters and a top speed of 250 km/h.

In a video released on Thursday, the 46-year-old inventor flies over the Etang de Berre in Bouches-du-Rhône (France), demonstrating extreme maneuvering capabilities. A demonstration flight scheduled in Spring at the airfield of Salon-de-Provence was canceled after French aviation authorities refused permission.

With his Zapata Racing company, the French ex-champion has already developed several one-person (hydro-)flying devices up and above the water under the brand names Flyboard® (powered by jet skis or electric pumps), Hoverboard® by ZR, Jetpack® by ZR, and Flyboard® Air, ‘the most compact redundant aircraft ever created’.

Now it’s time for some bigger stuff, like the JetRacer, with a load capacity of 200 kg. It is a vertical take-off and landing aircraft, without an airfoil, powered by ten kerosene-fueled micro turbojet engines. It can fly as high as 3 000 meters at speeds up to 250 km per hour.

The only drawback is its range. Figures are not released, but the phrase on the website, “Its main characteristics are maximum speed and high maneuverability, at the cost of a relatively short range,” says enough.

Civil and military use

“JetRacer® is built on a light and modular chassis, allowing it to meet multiple needs, both civil and military, as well as being remotely controlled,” Zapata says on his website. “All critical systems are architected to provide an extremely high level of redundancy and safety: propulsion, control, power supply, etc.”

In practice, this means you can lose two out of the ten engines, the control system, the fuel system, or the power supply (for each engine) without dramatical endings.

Zapata sees the JetRacer used in civil applications for leisure (like his Flyboards and other water toys) or aerial demonstrations. The military or security sector could use the device to access steep terrain, fly in strong winds like reaching a ship in a storm at sea, transport materials, reconnaissance and surveillance flights, special operations, etc.

For a future flight test campaign in the United States, Zapata is building two more prototypes. Most remarkable, he invites volunteers on his website to join the team of ‘test pilots’.  Hundred people will be drawn to participate in the selection tests, ultimately appointing 25 participants for this unique experience.