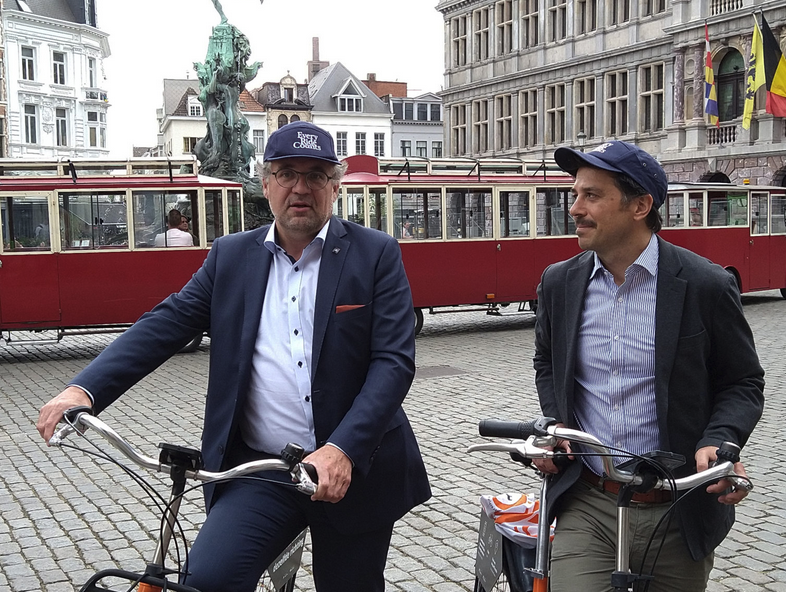 Antwerp has kicked off the rollout of an extensive shared e-bicycle network. In May, the city announced that the 32 municipalities of the Antwerp transport region and the Waasland would start to launch a large shared e-bike platform.

In the meantime, the first bright orange bicycles are driving around the metropolis. On May 11th, Antwerp Alderman for Mobility Koen Kennis (Groen) tried out one of the vehicles (see picture), accompanied by Erdem Ovacik, CEO of the Donkey Republic, the provider of the bikes.

About 1 650 shared e-bikes will be available by November, plus another 200 traditional bikes. The Danish Donkey Republic will provide and maintain the bikes.

Users can see via an app where bicycles are available, usually at stations or mobility hubs, and they can book their ride in advance. A half-hour ride costs 1,80 euros, but there are also monthly and yearly subscription packages.

Dropping off a used bicycle can be done at any dropping zone, as long as the bike will be locked through the app. The project is intended to get more people on the bike and to offer more people a solution to cover longer distances.

The project coordinator is Lantis, manager of large construction projects like the Oosterweel connection in Antwerp.

“The increasing popularity of the bike in cities has a positive impact on them,” said Erdem Ovacik, CEO of Donkey Republic. “Traffic safety improves, people feel more at ease in traffic, it’s better for everybody’s health and the local economy because people tend to stop more frequently for a coffee or some shopping.”

The Danish Donkey Republic is already active in Ghent for three years, and this spring, the organization asked for new permission for its 500 bright orange city bikes. The city is determined to offer its inhabitants and visitors a diverse offer of sustainable means of transport.