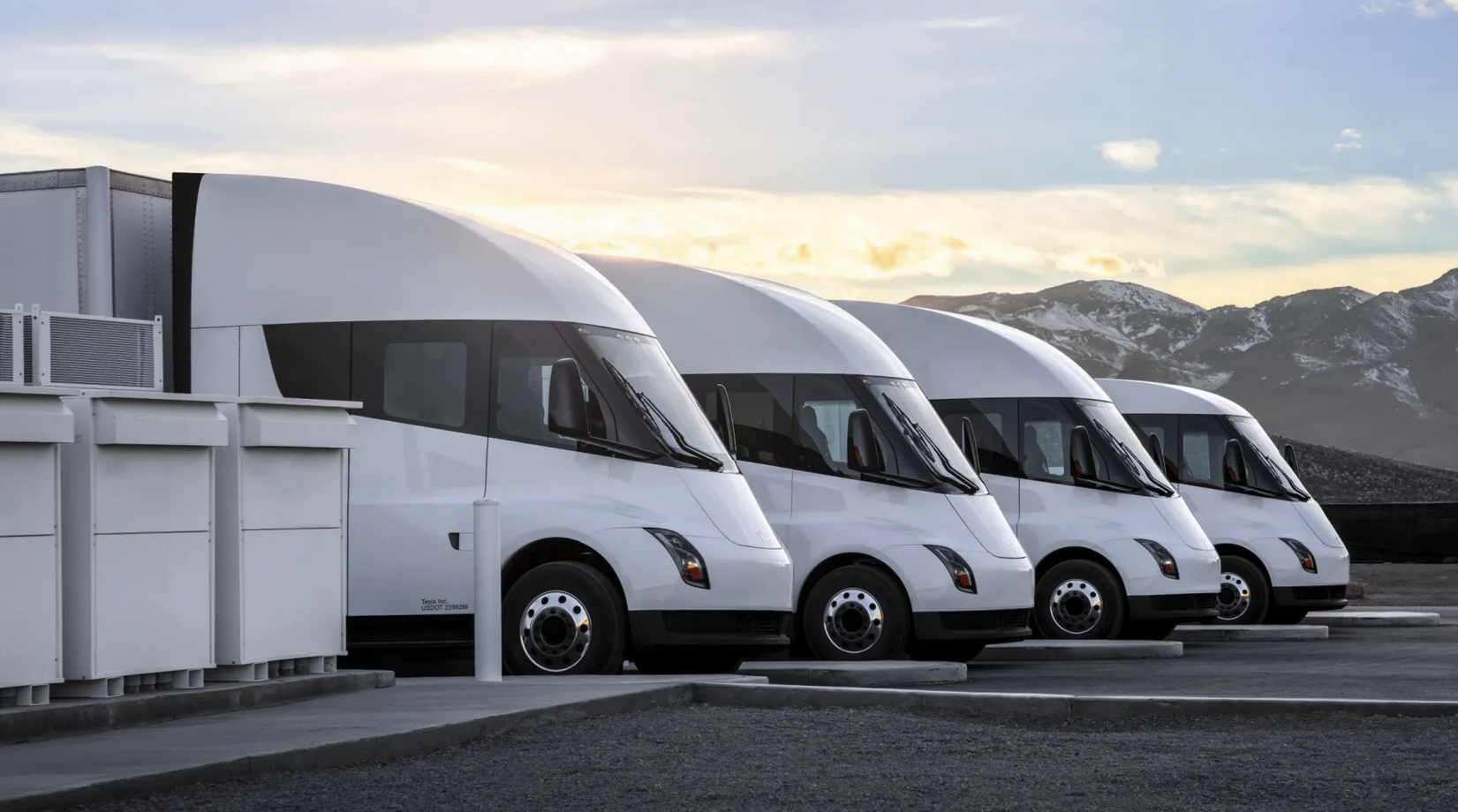 Tesla Semi trucks are charging at the Megacharger at the small production facility, next to Gigafactory 1 in Nevada. It seems deliveries to the first clients could be before the end of the year /Tesla

Electric carmaker Tesla will finally deliver the first fully battery-electric class-8 Semi trucks with a 500-mile (800 km) range by the end of 2022. At least, this is what Elon Musk promised on Twitter. And PepsiCo, which ordered 100 of them years ago, is probably the lucky one to get them first.

Tesla unveiled the Semi already in 2017, promising deliveries by 2019, but had to postpone that year by year until nobody believed anymore the company would even be capable of delivering in 2022. Until he tweeted on Wednesday, “Tesla 500 mile range Semi Truck starts shipping this year, Cybertruck next year.”

Tesla’s Semi, shown for the first time in November 2017, is a futuristic-looking truck with a fixed cargo trailer or a semi-truck. The cab, with the driver sitting in a central position with two fixed touch screens in front of him, is kept as narrow as possible to improve aerodynamics. A jump seat in the rear allows for a passenger.

The Semi is powered by four electric motors, the same as in the Tesla Model 3, independently driving each wheel on the rear axles. Like a 4×4, the truck can automatically adapt the wheels’ traction to maintain the best grip. Without load, the Semi is said to accelerate from 0 to 100 kph in five seconds, with 40 tons of cargo in twenty seconds; 5% grades can be taken at 100 kph.

At that time, prices of $150 000 and $180 000 were mentioned for the 300-mile and 500-mile range versions, respectively. To offer those ranges for a 40-ton truck, the battery packs have to be substantial, adding to the cost and limiting the loading capacity of the truck. Both factors are critical to making the truck profitable for its owners.

20% cheaper than a diesel truck

Nevertheless, Musk ensured at that time that “the Tesla Semi will have fewer systems to maintain and will save more than 200 000 dollars on fuel costs, making it 20% cheaper than a diesel truck with a two-year payback period in terms of cost of ownership.”

In March 2021, Tesla started to set up a Semi production line at a new building near its Gigafactory Nevada plant. According to Electrec. co, at that time, the plan was to produce five electric trucks per week.

But ultimately, in July, at the presentation of the Q2 results, Tesla communicated that “to better focus on the car factories, and due to the limited availability of battery cells and global supply chain challenges, we have shifted the launch of the Semi truck program to 2022.”

It seemed Musk wanted to wait for higher volume availability of its 4680 battery cells, which are more compact and have a higher energy density, better suited for the large battery packs needed for the trucks.

Meanwhile, many big companies worldwide are waiting for the first trucks to be delivered, for which they paid an advance of $20 000 per truck. Among them, Anheuser Busch, daughter of Belgian beer brewery AB InBev, ordered 40 of them.

Sysco, one of the world’s largest food service distribution networks, confirmed an order of 50. But also German package delivery service DHL, supermarket chain Walmart, and PepsiCo announced to have placed orders. Pepsi’s order in 2017, shortly after the presentation of the Semi 100 trucks, was one of the biggest.

Fifteen of these trucks are meant for Pepsi’s daughter Frito-Lay, which manufactures, markets, and sells corn chips, potato chips, and other snack foods. It has its largest production facility in Modesto, California, and announced earlier it wants to turn that into a “Near Zero-Emission Freight Facility Project”. Local environmental authorities half subsidize that $30 million project.

Musk always promised to roll out a network of ‘Megachargers’ capable of charging at 1 MW, three times more than its most potent Superchargers today (324kW), to support its Semi trucks. Tesla claims 400 miles (650 km) of range in just 30 minutes is possible.

According to Electrec, Frito-Lay was expecting its first Tesla Semis at the end of 2021 before news broke the program was postponed. But meanwhile, Tesla installed a Megacharger at its Modesto factory, which might indicate imminent deliveries.