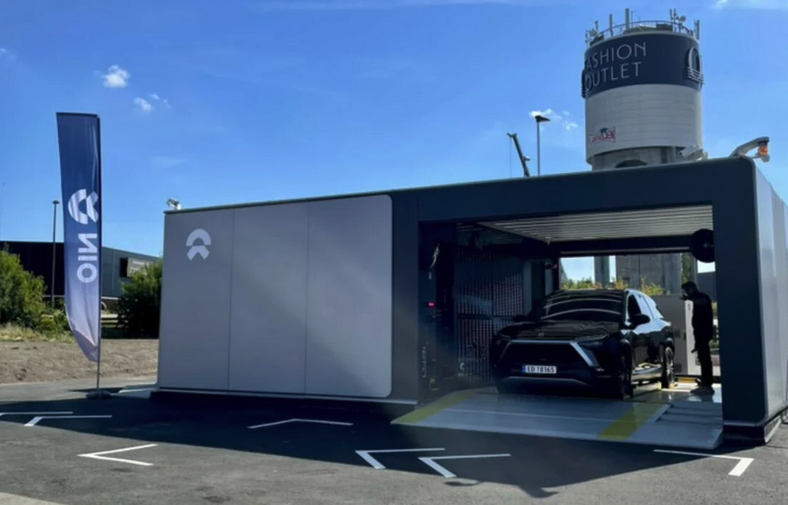 With NIO opening its second battery swapping station in Europe and XPeng Motors showcasing a new ultra-fast supercharger that offers up to 400 kW of usable charging power, the debate flares up on Chinese social media about what solution is best.

Xpeng’s S4 chargers can load an XPeng G9 SUV model equipped with a CATL battery with an extra 210 km of range in just five minutes. NIO can swap the 100 kW battery of its ES7 SUV in five minutes, providing 570 km of new range. What would you prefer?

For Shen Fei, Vice President of power management at NIO Automobile, the answer is evident as he posted on the Chinese micro-blogging alternative for Twitter, Weibo. “Fast charging is, of course, great, but I don’t think it’s better than battery swap, which is still more competitive,” he said.

He points to accepted wisdom in the EV industry that ultra-fast charging will deteriorate your battery faster when used constantly. On the other hand, not all EVs are created equal. He makes a subtle remark that only XPeng’s top model G9 with 800 V technology supports the company’s S4 Supercharger, according to Chinese EV news channel CnEVPost.

And a practical situation might occur when four cars charge simultaneously at the super-fast charger, getting only 100 kW each. There is the human factor, too, says Shen Fei, “Users face a tough choice at each charge, whether to charge for a few minutes and leave, or charge for a little longer.”

That increases the risk of queues at the charging stations. More of these stations would be needed in time to keep the advantage of fast supercharging.

In an investors note commenting on the Xpeng S4 supercharger and the ‘Chinese race on fast-charging starting’, analysts of Morgan Stanley point out the fact that a growing number of models supporting high-power charging will drive the adoption of EVs to a critical mass, which could double the speed of China’s transition to EVs.

“Aside from charging accessibility, consumers are generally discouraged about the lengthy energy replenishment times,” Tim Hsiao says. “We expect the upgrade to 800V vehicle electrical, brand new electronic (E/E) architecture, and high-power charging (HPC) will further enhance user experience.” But this will require an upgrade of the Chinese grid, he warns.

Among the pioneers of battery swapping in China are carmakers BAIC, NIO, and Geely, the parent company of Volvo. Eight months after installing its first battery-swapping station in Norway, NIO opened the second one in Vestby, south of Oslo, and plans two others in Bergen. A step further in the direction of the planned network in Europe.

NIO has 1 060 battery swapping stations in China operational and wants to expand to 4 000 worldwide by 2025, with 1 000 of them ‘in oversea markets’. Shell and NIO announced in November last year they entered into a strategic partnership to collaborate on charging and battery swapping facilities in China and Europe.

In Hungary, the carmaker is building the so-called ‘NIO Power Europe Plant’, which is the company’s first overseas production facility designed to make the swapping stations. It should be operational by September, as announced by Péter Szijjártó, Hungary’s Minister of Foreign Affairs and Trade, and Hui Zhang, Vice President of NIO Europe.

All NIO’s cars are designed from the ground up to have swappable batteries, which can be rented instead of owned.  Major drawback: only NIO cars are eligible for this battery, except for a small number of EVs suitable with a special adapter plate.

But at NIO, this leaves the customer the choice between batteries of 75, 100, or 150 kWh with ranges up to 850 km. One of the advantages mentioned in Chinese media is that when you drive into the fully automated swapping station, you’ll get a battery charged up to 93% at once.

When using a fast charger, you’ll never get that far unless you have plenty of time and are willing to pay more. In a typical DC Fast Charging Curve, kilowatts flow increases as the battery warms up until it reaches an 80 percent charge. Then charging slows down, taking almost as much time to go from 80 to 100% as the initial 10 to 80%. That means people might occupy the charger twice as long as needed, making queues only longer.

Still, NIO itself is fully engaged in the race for superchargers, too, having 1 820 charging stations in China, compared to 1 000 for XPeng. The latter plans to set up S4 (480 kW) chargers in ten Chinese cities with the largest orders for its G9 SUV this year.

At its second Power Day event in July this year, NIO announced it wants to start with the roll-out of a fast-charging network capable of 500 kW. As in China, rolling out muscles on charging seems to be somewhat of a national sport, as my colleague wrote earlier, we’re likely to see the same thing happen shortly in Europe.