Noiselessly to final resting place without a carbon footprint

With its extended chassis and carbon fiber deck for the coffin, the Nissan Leaf Hearse is a stylish way to leave this world /Wilcox Limousines

Noiselessly to your final resting place, leaving this world without a carbon footprint. It’s possible with an all-electric hearse, like a converted Tesla Model S or Mercedes e-Vito. Still, the most affordable is probably this Nissan Leaf Hearse converted by Wilcox Limousines.

This leading British family coachbuilder, established in 1948, converted a standard 68 kW Nissan Leaf by cutting the rear doors and pillars, extending the chassis by 80 cm, moving the battery backward to better balance the weight, and building a new carbon fiber deck for a 2,1-meter coffin.

As its weight remains roughly the same as the original Leaf by replacing the metal rear end with light-weight carbon fiber, the Leaf Hearse has the same range, some 330 km. That should cover, in most cases, effortlessly the distance to the graveyard.

According to Louis Wilcox, grandson of company founder William Wilcox, “The Leaf hearse is ideal for the increasing number of people asking for a simpler and greener burial or cremation for their loved ones.” The first one was delivered to London-based Leverton & Sons, a ‘royal’ funerals specialist, writes moveelectric.com, who conducted a ‘live’ test drive.

Beeper to alert the man in front

An all-electric hearse is a perfect choice for a funeral procession in respectful silence, but it might be a problem for the conductor, who walks ahead of the hearse, says the coachbuilder. As he can’t hear the hearse like he is used to, the latter might be far behind before he notices he’s walking alone with the procession trailing. So they adapted the Leaf’s reverse ‘beeper’ to alert him…

The Nissan Leaf Hearse is Wilcox Limousines’ first electric and, at £109 950 (€129 781), also the most affordable among a selection of more classic funeral cars available. A converted Jaguar XF retails at around £145 000 (€171 000), but you can also have a mild-hybrid Mercedes E-Class or a Bentley Flying Spur.

Wilcox Limousines exports its vehicles worldwide. In Europe, this is in partnership with other coachbuilders in Germany (Hentschke), Sweden (Nilsson), Spain (Bergadana), and Belgium (Thormes). 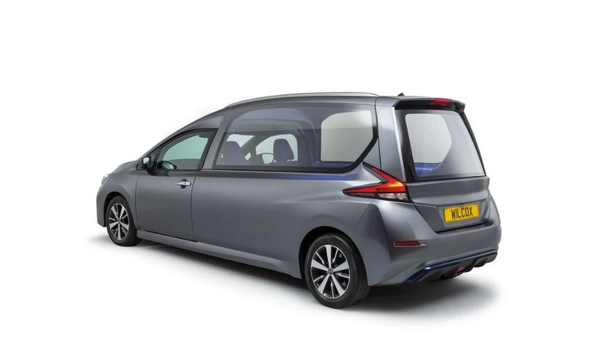