Germany goes shopping for raw materials and energy in Canada 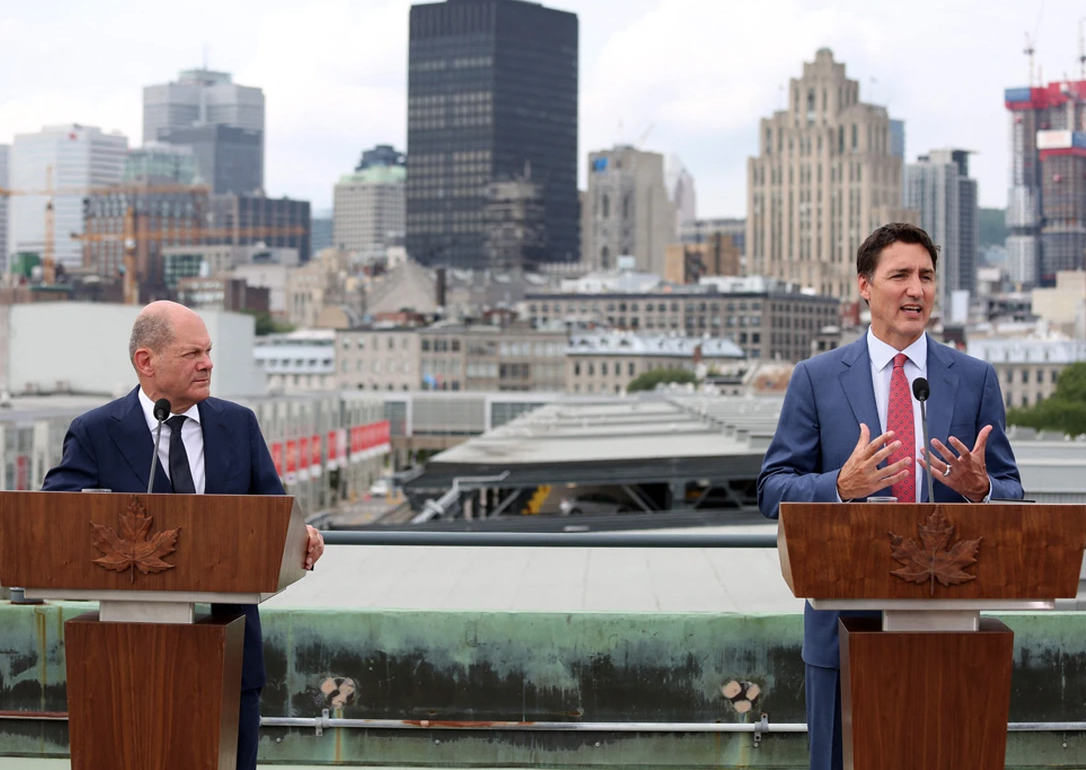 During a three-day visit, German Chancellor Olaf Scholz (left) has been shopping for raw materials and energy in Canada (premier Trudeau on the right) /AFP/Getty images

During a three-day visit to Canada, the German chancellor Olaf Scholz has tried to realize as many deals as possible in the domains of raw materials and energy production with the North American country.

In his wake, Volkswagen and Mercedes Benz signed agreements with the Canadian government to secure access to crucial battery raw materials such as lithium, nickel, and cobalt. Scholz also secured a deal to supply Germany with green hydrogen.

Mercedes-Benz and Volkswagen have confirmed in a statement that letters of intent were signed in Toronto in the presence of the German Chancellor and the Canadian Prime Minister Justin Trudeau.

Cooperation through the entire value chain

According to Mercedes, the intention is to deepen cooperation along the entire automotive value chain – from technical development and raw material extraction to production, service life, and recycling. The memorandum of understanding aims to promote collaboration and economic opportunities within the Canadian electric vehicle supply chain. This includes, among other things, access to primary raw material sources.

“To scale up mass production of electric vehicles, we need access to raw materials,” said Gunnar Guethenke, Vice President of Procurement and Supplier Quality of Mercedes-Benz AG. “With the intended partnership with Rock Tech Lithium, we are diversifying the sourcing of our raw materials as part of a direct sourcing approach to secure the lithium supply for Mercedes-Benz battery production in Europe.”

“As sustainability is a central pillar of our Mercedes-Benz purchasing strategy, we appreciate that Rock Tech plans to supply Mercedes-Benz with lithium from mining sites audited to the standard of IRMA and processed with renewable energy sources.”

From their point of view, Volkswagen says both sides will examine “what contribution Canada can make to the group’s global and regional battery supply chains”. It emphasized that PowerCo, the group’s newly formed battery company, will play a central role in this process and will drive the planned collaboration in battery value creation, raw material supply chains, and cathode material production in the North American region.

PowerCo is also responsible for the first VW cell factory in Salzgitter, whose foundation stone was laid in July in Olaf Scholz’s presence. “Collaboration with governments, authorities, and companies worldwide is essential if we want to reach our climate goals,” said the resigning VW Group CEO Herbert Diess.

The decision to secure necessary battery materials from North America should also be seen against the new US regulations on electric car subsidies. In the future, electric cars will only qualify for the full tax credit in the United States if they have been assembled and sourced with vital raw materials in North America.

In VW’s case, the supply from Canada should also simplify the supply chains for the plants in the USA. The series production of the ID.4, which still relies on battery cells from Korean manufacturer SK On’s plant in Georgia, started at the US plant in Chattanooga at the end of July. Rumors have it that VW is also considering battery cell production near its vehicle plant in Tennessee.

The German business newspaper Handelsblatt says that VW is even aiming to become the first Western carmaker to acquire direct stakes in mines. “We are not opening any mines of our own, but we want to take stakes in Canadian mines and mine operators,” VW board member for technology Thomas Schmall told the paper. According to Schmall, the aim is to secure volumes and prices through long-term supply agreements, for example, as part of a joint venture with PowerCo.

Although further details of the supply agreements have not yet been revealed, the example was given that VW or PowerCo could secure 20 to 30% of a mine’s annual production at a fixed price. In comparison, mine operators could sell the remaining 70 to 80% of their volume to third parties at world market prices.

Other carmakers, like Tesla, BMW, GM, and Ford, have already switched to buying cells from the battery manufacturers and procuring the raw materials from the mining groups to make them available to the respective cell partner.

In China, BYD not only builds its own batteries but also announced in mid-August that it would invest over four billion euros in a battery factory and a mining project in Yichun in the Chinese province of Jiangxi.

Canada is also reportedly to become the source of green hydrogen for Germany. This is necessary to replace missing Russian gas to power German factories and heat German households. Hydrogen can also be used in fuel cell vehicles or transformed into green ammonia transported in ships. The current energy crisis in German has prompted the need for an interim supply of gas and a more long-term supply of green hydrogen made from renewable energy.

Before the talks started, German Minister for Economic Affairs, Robert Habeck (die Grüne), had said that the aim was to enter into an energy partnership for the future. Habeck noted the ideal wind conditions for producing green hydrogen from renewable energy in Canada’s Newfoundland region.

In what the two countries call a ‘Hydrogen Alliance’, the German-Finnish utility Uniper has secured an agreement to source 500 000 tons of green ammonia, made from renewable hydrogen, from a large new project called EverWind on Canada’s Atlantic coast from 2025. 75% of the Uniper shares are owned by the Finnish company Fortum.

According to the magazine Recharge, Uniper CEO Klaus-Dieter Maubach said: “Uniper is building up a portfolio of H2 products on a global scale by originating, transporting and finally supplying customers mainly in Europe in the future.” Furthermore, he explained: “The EverWind project is a very promising opportunity to source green ammonia based on excellent conditions and governmental relations to support the endeavor.”

The ‘energy providing journey’ of the German Chancellor to Canada has also gained a lot of criticism. Green movements and parties are worried that Germany, in its frantic search for gas to replace the Russian deliveries, will do anything to acquire them, also investing in new gas terminals, gas power plants, etc. Many fear that these renewed and heavily increasing investments in fossil energies will hamper the switch to renewable energy sources.