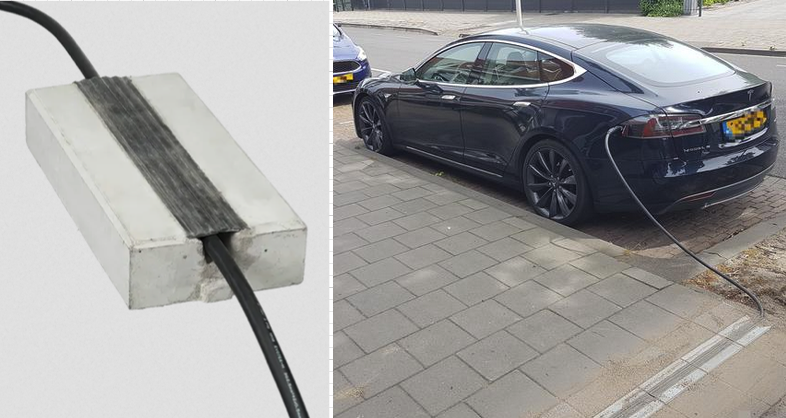 The cavity of the ingenious concrete stone holds the cable, and the result is an even surface /evservice.eu – stradus.be

The city of Hasselt experiments with a new type of pavement that integrates the charging cables of electric vehicles (EV). The concrete EV cable duct paving stones, as they are called, were invented and developed by Armand Hermans, a Dutch citizen living in Dongen (the Netherlands) and are currently marketed by several companies.

Two years ago, Armand Hermans conceived the idea of the paving stone. Hermans has an electric car, but his house doesn’t have its own private drive. Charging his vehicle at home would mean the cables lying around on the pavement, which is forbidden in the Netherlands. It’s too dangerous; pedestrians could stumble over the cables. With the special paving stones, the problem is solved.

Hermans came up with the idea, and the municipality of Dongen supported it and helped realize it. The result is a cut-away concrete paving stone (30 x 5 x 3 cm) with a  rubber sleeve. The cavity of the stone holds the cable, and the result is an even surface.

The municipality of Dongen started using the stones two years ago, and now Hasselt, in Belgium, will copy the idea. The first EV cable duct paving stones will be used in the Theresiastraat, a street in a school surrounding which is getting a drastic makeover to improve traffic safety.

In the meantime, several manufacturers in Belgium and the Netherlands market the ingenious stone. Belgian Stradus, among others, has the stones in its range. Stradus produces prefab paving and concrete products for public places, roads, and residential areas. In the Netherlands, EV Services in Utrecht, which specialized in charging infrastructure, offers a similar paving stone.

Armand Hermans is not the first citizen to rack his brains over a solution for a relatively new problem. The Flemish architect and entrepreneur Danny Vaes (48), who specialized in urban development, developed another intelligent charging system for electric vehicles. He, too, wanted to find a solution for EV owners who normally cannot charge at home.

Vaes developed a system to charge an electric vehicle from above via a telescopic arm, hovering 2,5 meters high in the air. When unused, the system looks like an ordinary rainwater pipe fixed to a housefront. There’s no need for a public charging station, and no cables are lying around on the sidewalk.