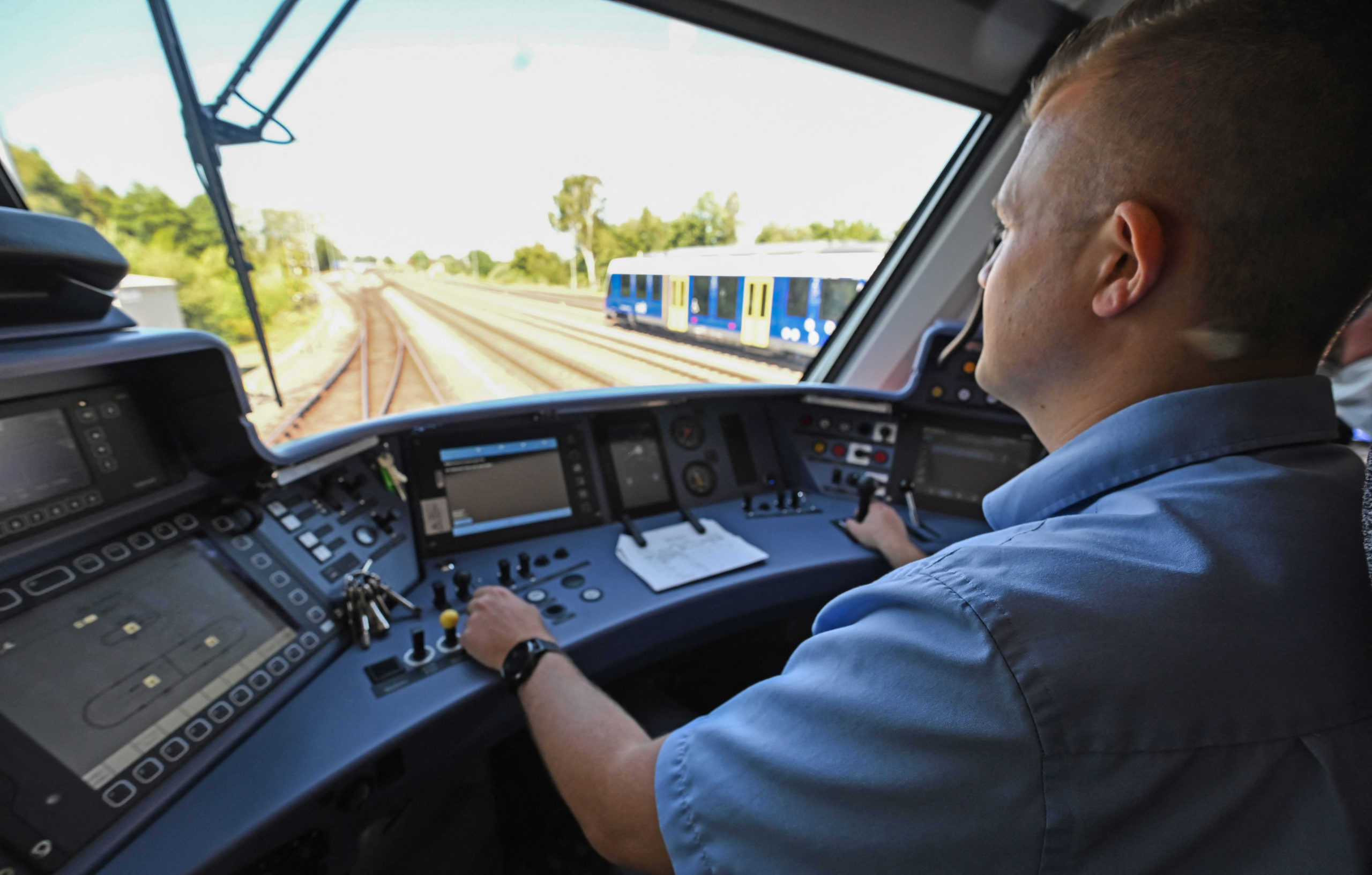 After more than three years of fruitful testing with two trains, the German regional line between Cuxhaven, Bremerhaven, Bremervörde, and Buxtehude is now officially the world’s first passenger train line where hydrogen replaces diesel completely. Fourteen Alstom Coradia iLint trains will service the 100 km trajectory on a daily base.

At the same time, Linde has inaugurated one of the largest hydrogen refueling systems ever built to provide these 14 trains with 1 600 kg of hydrogen per day, enabling each train to run for 1 000 km emission-free on a single refueling. The station is designed to produce its own green hydrogen in the future.

The Coradia iLint is based on Alstom’s successful Cordia Lint series of diesel passenger trains for regional transport.  The diesel propulsion is replaced by an electrical one, fed by an array of fuel cells on the roof of the train, where also the hydrogen tanks are mounted.

The train performs similarly to its diesel counterpart, with a top speed of 140 kph and comparable accelerating and stopping power. It has a range of 1 000 km without refueling. Contrary to the diesel train, it emits no CO2, NOx, or harmful particles. Just steam and water.

The hydrogen version of the Coradia train is one-third more expensive than its diesel sibling. But it is considered a far less expensive solution than having to electrify the 100 km of the train line in this case to run electric trains.

The trains were developed at Tarbes (France) and assembled at Linke-Hofmann-Busch in Salzgitter (Germany), a company Alstom took over two decades ago.  There trains for other regional lines will be built too.

Replacing up to 3 000 diesel trains

In May 2019, Alstom raked in a significant order for 27 hydrogen trains for the German state of Hessen, the region of Frankfurt. The Rhein-Main-Verkehrsverbund (RMV) wants to replace its diesel trains starting in 2022.

In Germany alone, 2 500 to 3 000 diesel trains are eligible to be replaced by hydrogen, estimates Stefan Schrank, hydrogen project leader at Alstom. In Europe, 15 to 20% of the regional train lines could be served by hydrogen trains, Alexandre Charpentier, train expert at Roland Berger, told the French news agency AFP.

But he warns that even when Germany has devoted 7 billion euros to a program to become a hydrogen leader, there won’t be enough ‘green hydrogen’ available to suit all needs as other sectors like heavy road transport, maritime shipping, but also the steel and chemical sector are looking into the possibilities of hydrogen to reduce their carbon footprint.

In May of this year, Siemens, German multinational and the most significant industrial manufacturing company in Europe, presented its own hydrogen train at its factory in Krefeld.

In 2019, Siemens and Alstom wanted to merge into one company to become the world’s second-largest manufacturer of trains and train equipment as a counterweight to global leader Chinese CRRC.

But the EU Commission blocked the fusion plans in February 2019, arguing the merger would limit the member states’ future choice in high-speed trains, intercity and regional trains, and railroad signaling equipment.

This first Mireo Plus H, as the Siemens model is called, is a two-car configuration with a range of about 800 kilometers and a top speed of 160 km/hour. It will start test sessions in Baden-Württemberg in 2023.

Once the test phase is complete, the Mireo Plus H will be used for regional transport as of 2024. It will enter into service between Tübingen, Horb, and Pforzheim, where it will run for at least 120 000 kilometers.

DB and Siemens Mobility estimate that a hydrogen train running 200 000 kilometers per year can result in annual savings of more than 500 tons of CO2. “Every train with a 30-year life span will save up to 45 000 tons of CO2 compared to similar car rides,” said Michael Peter, CEO of Siemens Mobility.

Meanwhile, several other European countries are looking into the possibility of the hydrogen train replacing diesel on lines that would be more expensive to electrify. Alstom signed a contract in Italy with the regional Italian rail operator, Ferrovie Nord Milano (FNM), to deliver six hydrogen trains.

The hydrogen train developed by Alstom will finally be put on the rails in its home country France too, in four pioneering regions by 2023. Twelve to fourteen trains will be delivered through a frame contract with the railway company SNCF to Auvergne-Rhône-Alpes, Bourgogne-Franche-Comté, Grand Est and Occitanie.

The fuel cell trains are an alternative to diesel trains on non-electrified lines. For the SNCF, which has promised to get rid of its diesel trains by 2035, time presses. Today, 1 100 regional TER (Transport Express Régional) railway lines are using diesel trains.

Dutch railway manager, ProRail, conducted tests with the first hydrogen train in the Netherlands on tracks between Leeuwarden and Groningen in February 2020. During two weeks, tests were run at night at speeds up to 140 km/hour.

And in April of this year, Alstom and French energy giant Engie announced they aim to replace all freight diesel locomotives on the non-electrified parts of the French rail network. Alstom will develop a heavy-load fuel-cell locomotive, while energy provider Engie will produce and supply emission-free hydrogen from renewable energies. The new train’s first run is scheduled for 2025.