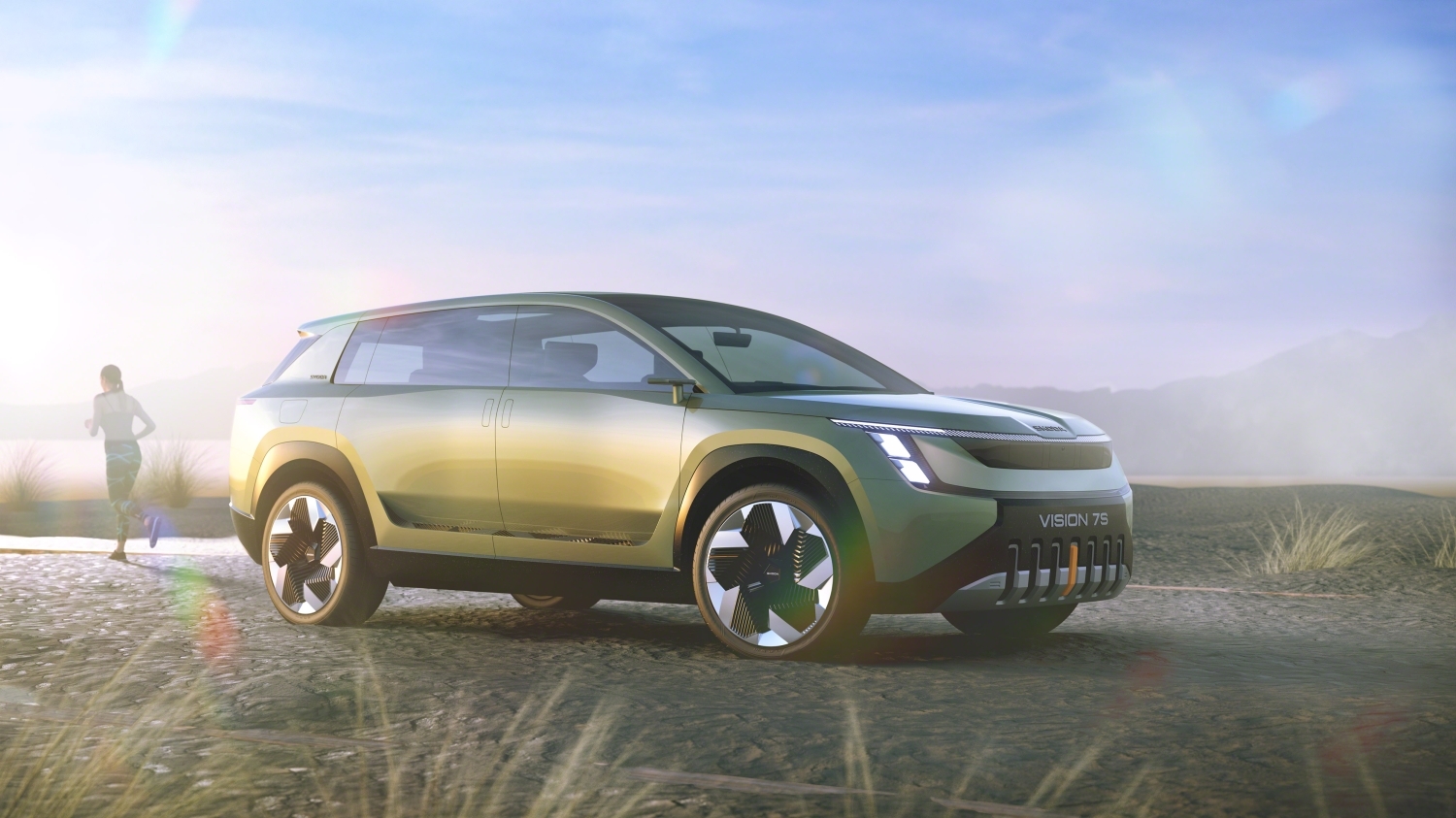 With a new boss, Klaus Zellmer, taking the wheel in July, Czech VW-daughter Škoda molts old notions and gears up its (electric) vision: a new modern design language, a new logo, and what it calls ‘a comprehensive corporate identity update’. The Škoda Vision 7S concept presented Tuesday evening, a full electric seven-seater EV with a +600 km range, has it all.

The three new all-electric models announced earlier to hit the market ‘before 2030’ – a small city car, a compact SUV, and a seven-seater family car –  are now expected as early as 2026, with more to follow.

Škoda is investing another €5,6 billion in e-mobility and €700 million in digitalization over the next five years. By 2030, more than 70% of all Škodas sold will be electric. And they will have more than ever their own unique character.

“Through our new brand identity, we’re getting ready for the electric future and clearly positioning Škoda among the external competition while at the same time distinguishing ourselves even more clearly from the other brands in the Volkswagen Group,” said Martin Jahn, Board Member of Sales and Marketing.

Preview of a new style

The Vision 7S concept study is a good preview of the new style the Czech carmaker is pushing through under chief designer Oliver Stefani and CEO Zellmer, a man who spent most of his career at the sports car manufacturer Porsche.

Technical specs are given sparsely, but we know it’s built on Volkswagen’s MEB platform for EVs; this one has an 89 kWh battery providing a range of more than 600 km.

In all future communication and oncoming cars, we’ll see the new stylish wordmark logo on the nose of the Vision 7S appearing more often than the company’s classic black-green picture mark it has worn for decades. The winged arrow symbol has been simplified on the new picture mark and rendered without plastic 3D graphics.

The typical Škoda green is now diluted into two different green hues – Emerald and Electric Green, ‘which represent ecology, sustainability, and electromobility’. Those colors are also shown in the matt body color of the Vision 7S concept and the interior.

The Vision 7S is a rather good-looking attempt to make the umpteenth version of an SUV by using tighter lines with soft edges like those used in Škoda’s new wordmark. Narrow headlights are positioned outwards and arranged in two rows, one above the other, extending the light cluster to form a ‘T’. The same ‘T light cluster’ marks the rear.

The car’s grill, obsolete for an electric car, has been replaced in the upper part by a black glass surface hiding the sensors underneath. A grill with seven vertical air intakes, with a kind of Hummer-look, is integrated lower into the front, through which air is directed to the cooling systems and brakes.

Same feature at the back with nine intakes and a red accent. The bumpers are particularly striking as they are made of durable, recycled tires. This material is also used for wheel arch linings and, in the interior, for the car’s floor. The long passenger compartment with front and rear doors opening oppositely without a B-style hint at generous interior space.

It’s a six-and-a-half seater, as it features a child chair facing backward on the middle console, extending to the second row of seats. Škoda says this is the safest spot in the car for such a child.

The cockpit offers two interior configurations, driving and relaxing, with a rotating 14,6-inch central touchscreen and sliding elements. Relax mode can be selected at the touch of a button in the center console while waiting at a charging station, for instance. With a 200 kW charging capacity, the waiting shouldn’t be too long if this car ever goes into production.

What happens is pure magic, with the steering wheel and instrument cluster sliding backward away from the driver to create additional space,  the screen rotating into a horizontal position for a better view, front seats rotating inwards and reclining for extra comfort, allowing the rear passengers to view the screen. The seats in the second row also recline.

But you’ll find other nice-to-have gadgets while driving, too, like passengers in the second and third row who can magnetically attach their smartphones to the seat backrests in front of them as a private screen for optimal viewing. We’re curious how many of these nice features we’ll actually see appearing in future Škodas.