Don’t bother to wait for the Polestar 6 LA Concept edition, as all built slots are ‘sold out’ already /Polestar

There were few doubts Polestar’s electric roadster would appeal to many: the 500 limited edition versions of the Polestar 6 LA Concept are ‘sold out’ in less than a week. Later this year, reservations for the regular version will open.

Finally, hostilities broke off after three years, and the way is cleared for Polestar in France as Stellantis-daughter Citroën-DS dropped its complaints about the Polestar logo looking too similar to theirs. Meanwhile, the Swedish-Chinese sister brand of Volvo reported over one billion dollars in revenue for the first six months of 2022, with 21 185 cars delivered in 25 markets.

Last month, Polestar confirmed that the Polestar O2 roadster study model unveiled in March in Los Angeles will become a reality by 2026 as a production model designated as the Polestar 6. But before the world gets the Polestar 6, the brand will launch three other models first. Polestar 5 is scheduled for 2024, the last of three new Polestar models, of which two SUVs: model 3 (2022) and model 4 (2023).

It also announced 500 numbered units of a special ‘Polestar 6 LA Concept Edition’ to be produced in the unique ‘Sky’ body color of the O2 concept car with a light leather interior and 21-inch rims. All built slots were reserved online in less than a week, without most of the ‘buyers’ seeing no more than pictures of it.

“The high interest from our customers shows that a stunning electric roadster like Polestar 6 has high relevance in the sportscar arena,” comments Thomas Ingenlath, Polestar CEO. “The open-top-plus-electric combination is clearly one that appeals to even the most die-hard petrolheads.”

The strong demand for Polestar 6 boosts morale, as the Volvo-sister, which started as Volvo’s performance brand, took the road to electric-only after the pricy hybrid Polestar 1. Of this ‘showcase model’, it sold only a handful.

CEO Ingenlath remains confident. “We made important progress in the first half of 2022 as we doubled revenues and volume and successfully listed on the Nasdaq stock exchange in New York. In addition, we maintained strong momentum in our global order take and expect to deliver 50 000 cars to our customers this year, meeting our 2022 sales guidance.

Settling the fight with Citroën in France

The brand is present today in 25 markets, with 125 Polestar Spaces, Polestar Destinations, and Polestar Test Drive Hubs and 934 Volvo Cars service centers for maintaining the Polestar fleet. Until now, France was a blind spot on the European map for the Swedish-Chinese brand, as legal actions from Citroën-DS blocked the introduction for three years.

Citroën’s premium brand DS went to court, claiming that the Polestar logo could easily be confused with the DS logo. In 2020, a Paris court ruled that there is insufficient evidence the Polestar logo is legally a copy of the latter but that damage was done to the image of the French brand. Polestar was convicted of paying €150 000 in damages, and commercialization in France was blocked.

The conflict escalated further, and Citroën tried in vain to convince the judges of the European court to forbid Polestar from using its logo in the whole of Europe. Suddenly hostilities stopped.

Both parties apparently reconciled, according to the newspaper, Le Monde and Citroën dropped all charges. No comments were given. “The complaints are withdrawn,” a Citroën spokesperson told the newspaper. “This case is closed.” 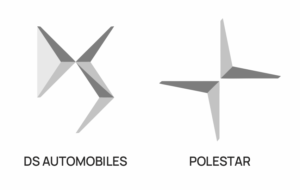