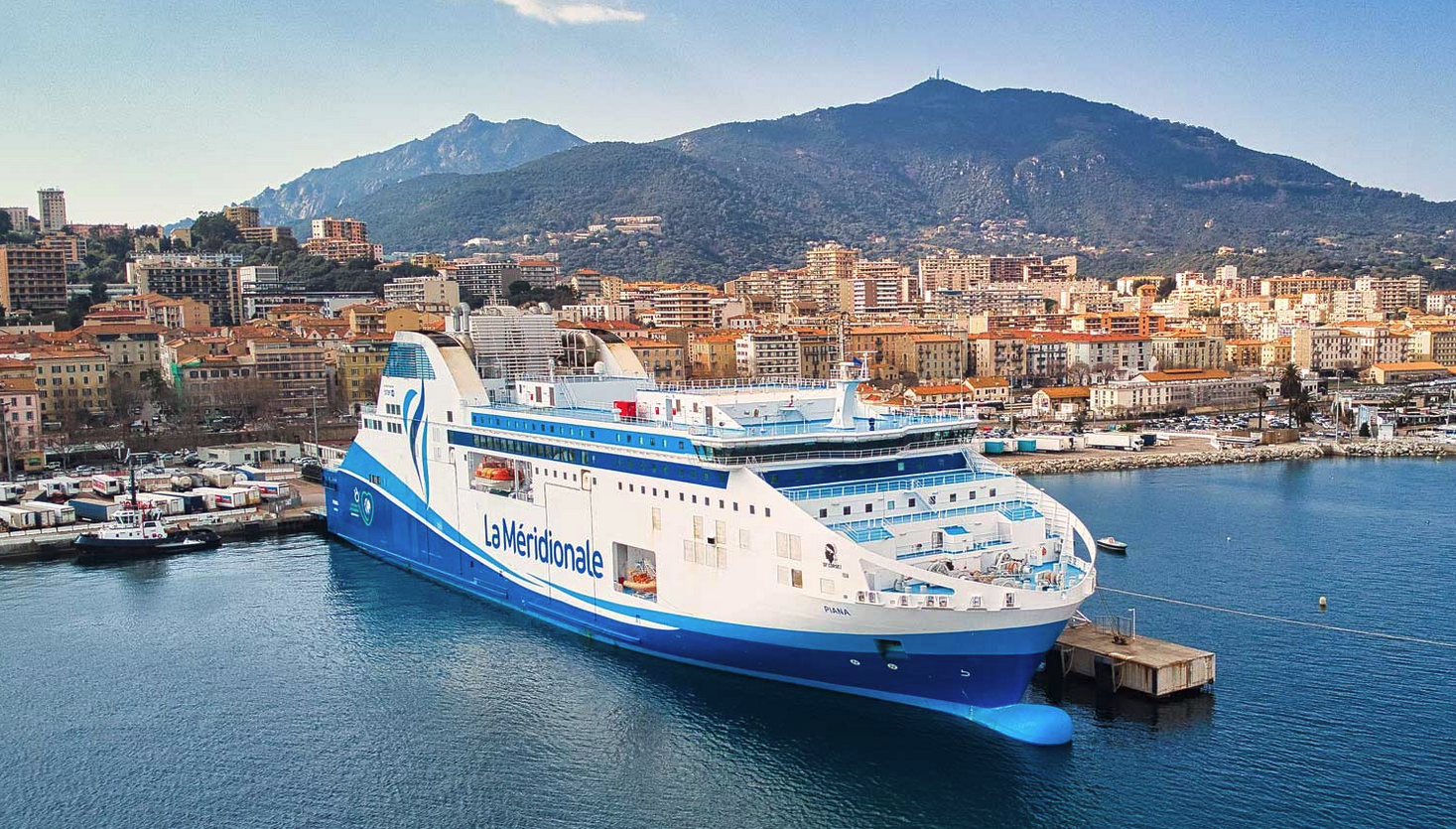 The 180 meter long RoRo ferry Piana is the world’s first equipped with a giant particle filter eliminating 99,9% of particles and 99% of sulphur /La Méridionale

French RoRo-ferry company La Méridionale has equipped as the world’s first one of its ships, the Piana, linking Marseille with the Ile of Corsica, with a diesel particle filter. It eliminates up to 99,9% of fine particulate matter and 99% of sulfur emissions.

Today there are no regulations for ships on these particles, known to have a devastating impact on the health of people living nearby densely populated harbors like Marseille. The system enables capturing ultrafine particulate matter by adapting a smoke treatment system already used in onshore installations for use on ships with high-powered diesel engines.

In Marseille, the matter of polluting ships is extremely sensitive. Until last week, more than 52 000 people have signed a petition launched by mayor Benoît Payan in July to ban polluting cruise ships. It’s one of the busiest ports in the Mediterranean, with two million passengers per year.

Shipping accounts for roughly 10 percent of air pollution in Marseille, even when they are docked with their generators still running. A 2018 study by air quality monitoring group Atmosud revealed that emissions from cruise ships exceeded car emissions in the city.

A cruise ship docked for one hour emits as much as 30 000 cars running at 30 km/h for one hour. Toxic concentrations of sulfur dioxide, nitrogen oxide, and particulate matter can have insidious health consequences.

The RoRo ferries connecting the mainland with Corsica are not as big as these monster cruise ships, but as they are operated daily, their impact is not negligible. The Piana, built in 2011, with its 180 meters length, and 30 meters wide, has 200 cabins and can accommodate 750 passengers and 200 cars.

The filter system developed by Andritz and Solvay used on the Piana ferry is huge, located on the upper deck between the ship’s chimneys. It works with a reagent (sodium bicarbonate, also known as baking soda) which is injected into the exhaust gas and captured by a bag filter of about 11 meters high by 6 meters wide and 12 meters long, weighing 60 tonnes.

The bicarbonate will settle in the bag-like filter and form a mantle (called a cake) that will capture fine particles and heavy metals that are stored for further treatment on land. On the Piana, the system was first tested with the exhaust gas of one of the four propulsion engines (9.5MW) and one of the three generators (1.5 MW) and later extended to all engines.

Diesel particle filters (DPF) have been generally used on cars since 2005, but no equivalent so far has been seen in the shipping industry. La Méridionale is now experimenting with a smoke treatment system that tackles the fine particles and, simultaneously, sulfur dioxide (SO2) emissions, going far beyond the current maritime regulations.

The MARPOL 2020 regulations of the International Maritime Organization (IMO) deal with SO2, limiting sulfur in ships’ fuel oil to a maximum of 0,50%. To apply that rule, ships are forced to use expensive Very Low Sulphur Fuel Oil (VLSFO) instead of High Sulphur Fuel Oil (HSFO).

Prices differ up to $500 per ton, encouraging the shipping industry to install so-called ‘scrubbers’ on their chimneys to keep using HSFO. In these scrubbers, the sulfur is ‘washed out’ the diesel fumes with seawater and – in an open system – dumped back into the sea. But the seawater is polluted to such an extent that it’s forbidden to dump the wastewater within three nautical miles of the coast.

The system on the Piana filters up to 0.1% of the sulfur, five times below the standard, and eliminates up to 99,9% of the fine particles. Something today’s ‘scrubbers’ are only able up to 60 to 80% in the best case.

What the filters on the Piana don’t tackle so far are nitrogen oxides (NOx), but La Méridionale wants to add a filtering system for that shortly. But it’s still no solution for the massive CO2 emissions.