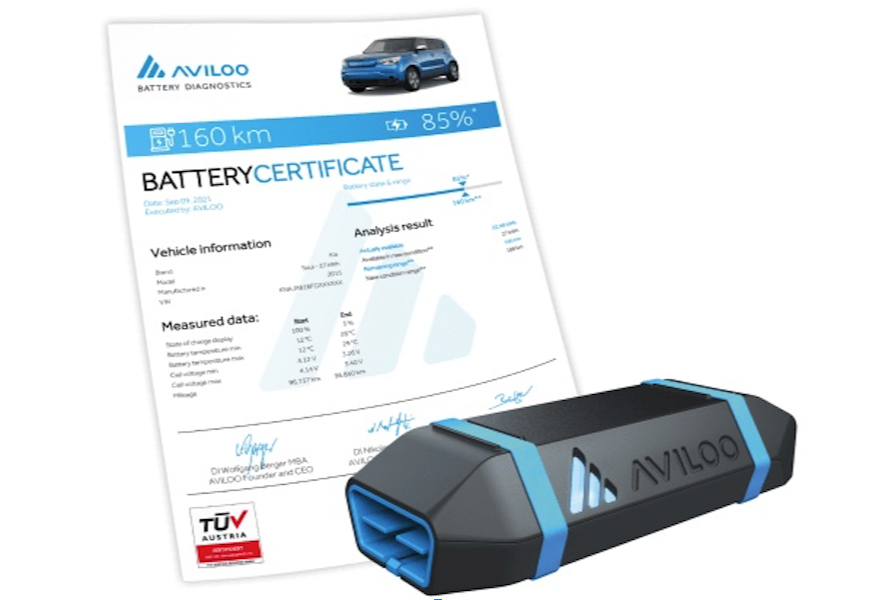 The Aviloo box is connected to the OBD port of your EV to read out millions of data during a test drive, after which the data are analyzed by experts and a detailed certified report is issued /Aviloo

Austrian start-up Aviloo has developed a unique certified health check for batteries of second-hand EVs, measuring with 100% accuracy how much the battery has degraded from its new state. German ADAC and its Dutch peer ANWB, among others, are convinced of the quality and offer the Austrian test to their members. But you can access Aviloo’s online store directly from any country in the EU.

Like Apple’s famous birth story, high-tech Austrian start-up Aviloo was founded in 2017 in the garage of Wolfgang Berger and Nikolaus Mayerhofer. They recognized the urgent need for an independent battery health check after purchasing a used electric car. The health of the expensive battery determines to a great extent, the residual value of a second-hand EV.

After two years of intensive research, they came up with a reliable check for EV and PHEV batteries, causing quite a stir in the industry. They managed to raise millions with the help of the Austrian Research Promotion Agency (FFG) and the EU Commission’s Green deal, among others.

Piece of hardware connected to OBD

For the test, Aviloo developed a piece of hardware with specific electronics to be connected to the EV’s onboard diagnostics plug for reading out all necessary data during a test drive in daily traffic circumstances. In Germany and the Netherlands, you can have the Aviloo box installed at ADAC or ANWB stations, or you can have it sent to you after ordering online.

The box comes with a monitoring smartphone app with instructions. The battery should be charged to the complete 100% at the start and the car driven in daily use (up to seven days) until a minimum of 5 to 10% charge is left.

The box is then returned to the partner station or Aviloo directly. The latter will issue a TÜV-certified ‘State of Health’ (SoH) for your battery within two working days. According to the manufacturer, it shows you an exact percentage of which extractable energy you can still use for driving in relation to the new state of the battery.

In the Netherlands, ANWB is offering the test, including sending back the Aviloo box, at 99 euros for established brands. When going directly to the website for Belgium or another country, you’ll find prices starting as low as €49 for a Mustang Mach-E or a Kia EV6 in a so-called ‘Premium Early Edition – Early Access Program’.

Older EVs like a Nissan Leaf or Audi e-tron are at the standard rate of €99. The reason for the lower prices for an Early Access Test for younger EVs, says Aviloo, “is because they are still in development. We need more data, and hiccups are likely to occur.”

In 2021, the Aviloo test was introduced in Austria, and later in 2022 Germany and other countries, “with no less an ambition than to revolutionize the used car market for electric cars to provide our customers with greater transparency on vehicle value and better value for money when buying and selling.”

Meanwhile, Aviloo can decode and interpret data from batteries in electric cars, ships, construction machinery, or stationary equipment, the company claims. Currently, 75% of all brands available for the EV market are certified.

So far, no Chinese brands are featured in the list. Asked why, Aviloo admits the Chinese brands are a matter of getting cars for testing, “which is, of course, in that case, a lot more difficult than with locally established brands.”