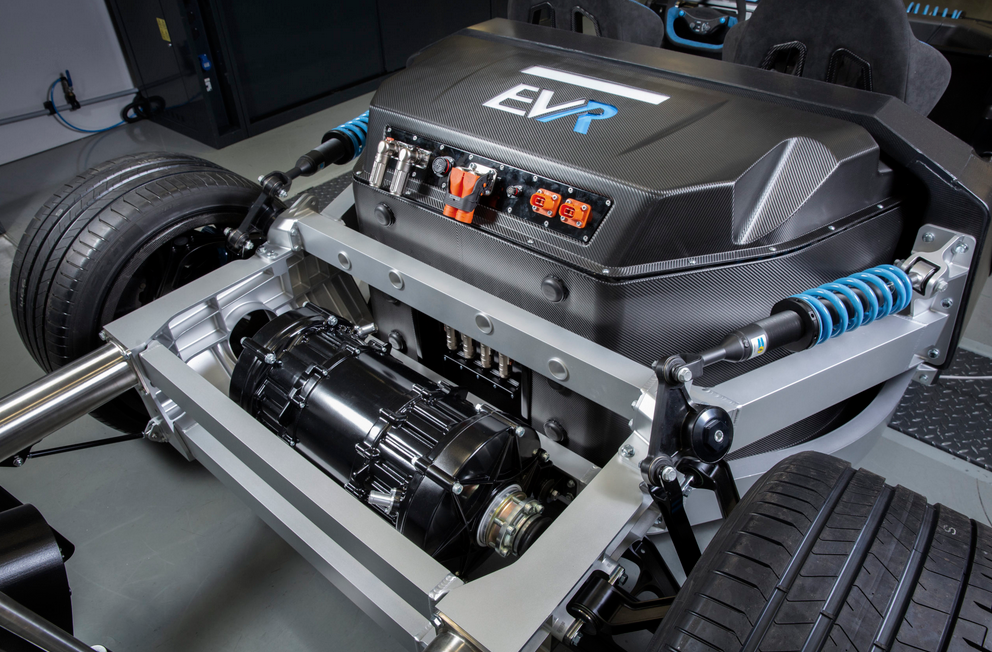 Williams Advanced Engineering (WAE) has unveiled a new electric vehicle platform specifically for hypercars called EVR. It is designed for a peak power of 1 650 kW and enables acceleration from 0 to 100 km/hour in less than two seconds.

Williams Advanced Engineering unveiled the architecture at the Cenex LCV (Low Carbon Vehicle Show) in Millbrook, UK. In addition to the performance and acceleration data, the British company cites a top speed of more than 400 kph with a vehicle mass of less than 1 800 kg for vehicles based on their new development.

Future hypercars based on the EVR will have an 85-kWh battery pack, to provide a range of more than 450 km, according to the company, and with the possibility to be charged in under 20 minutes.

The platform is designed for flexibility so that it can interest customers looking for either a complete solution, just the chassis, or any possible stages in between. In doing so, Williams promises flexibility in vehicle configuration and ‘maximum design freedom’. For example, EVR supports both track-only and road-going vehicles, rear-wheel drive alone and all-wheel drive, various electric motor configurations, and open and closed roof designs.

“It accelerates high-performance electrification and offers a turnkey solution for startups and OEMs with an affordable business case, shortened time-to-market, and highly flexible architecture,” he adds.

The company explains what ‘shortened time-to-market’ means. They aim to deliver the first EVR-based prototype to the respective customer within 12 months of project launch and to deliver a first production vehicle within 24 months.

As the next evolutionary step, WAE also announces the further development of the EVR platform to include a fuel cell. The EVR-H is to offer the same performance data as the BEV version and run on hydrogen.

Also displayed  at Milbrook is WAE’s new Scalable Battery Module, said to enable “the realization of customized battery concepts in record time.” Each module comes with a capacity of 1,08 kWh at a maximum voltage of 50 volts and an energy density of over 240 Wh/kg. An in-house developed “sense chain” architecture eliminates the need for redundant electronics. It even enables independent scaling of voltage and capacity, according to WAE.

“We are delighted to be showcasing this innovative new technology which offers greater flexibility and speed to market for customers across a wide range of sectors,” says Rob Millar, Head of Electrical at WAE.

“Williams Advanced Engineering or WAE has grown from an embryonic business in 2010 to one which now employs over 500 people engaged in leading-edge and transformative technologies for a growing list of applications, sectors, and clients,” says Craig Wilson, CEO.

In March of this year, WAE was bought by the Australian mining company Fortescue Metals Group. WAE will remain an independent company to accelerate its growth, while its leading battery technology will closely coordinate with Fortescue. Both will be managed by Fortescue’s green energy, technology, and development company Fortescue Future Industries (FFI).

To mark the purchase, WAE and Fortescue announced the world’s first, zero-emission “Infinity Train”. The regenerating battery electric iron ore train project will use gravitational energy to recharge its battery elec systems without any additional charging requirements for the return trip to reload.

“The acquisition of WAE is an important step in Fortescue’s transition to a global green energy and resources company, said Fortescue CEO, Elizabeth Gaines. “The Infinity Train is an important project to be developed together with WAE as we work to deliver on our target to decarbonize our mining operations by 2030. The train can be the world’s most efficient battery electric locomotive.”

Craig Wilson added: “High-performance battery and electrification systems are at the core of what we do. Now that we are part of the Fortescue family, this presents an exciting opportunity to develop new technologies as we work together to tackle climate change.”