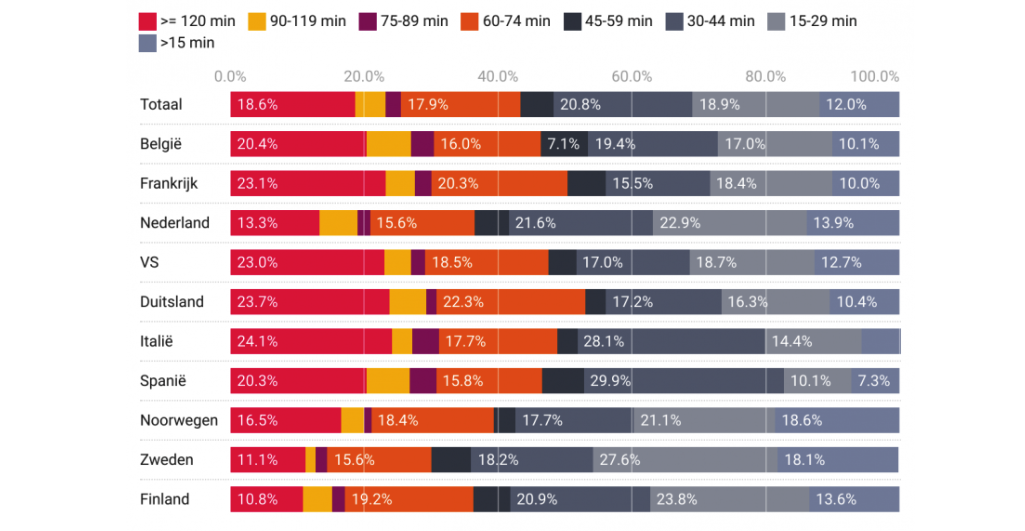 The graph above shows the average time people need for commuting in the ten analyzed European countries /sdworx.com

One out of five Belgian employees (20%) needs more than two hours a day to commute. Although most Belgians work in their own province, Belgian commuters cover the most extended distances. On the other hand, employees in Sweden and Finland hardly spend 30 minutes commuting.

These are the most remarkable conclusions of a recent survey by SD Worx. Another study, issued by another HR service provider, Tempo Team, confirms that the (private or company) car is again the most popular means of commuting in Belgium.

In Brussels, respondents say that public transport is their first choice (23,7%), followed by ‘own car’ (21,2%) or ‘on foot’ (10,5%). Belgian employees often opt for teleworking, and, thanks to teleworking facilities, one out of three (34%) limit their commuting trips to less than three times a week.

Half of all commuters in Belgium, the Netherlands, Italy, and Spain have a daily trip of at least 20 km ahead of them. The other half lives closer than 10 km to their work. Employees in France, the UK, and Germany live closer to work but need more time for commuting. On the contrary, people in Finland, Norway, and Sweden usually live nearby; half of them hardly have to cover five kilometers.

The SD Worx survey was conducted in March 2022 in Belgium, France, Germany, the Netherlands, the UK, Spain, Italy, Norway, Sweden, and Finland. More than 10 000 employees (10 119, to be specific) were interviewed.

A similar study, organized by HR service provider Tempo Team in cooperation with professor Anja Van den Broeck at the KULeuven, confirms the car’s popularity among Belgian commuters. According to their statistics, almost six out of ten employees (57%), as many as before the corona pandemic, use the car to work.

The Tempo Team study mainly focused on how corona impacted people’s commuting habits. Most respondents (44%) use their own car; 12% have a company car for commuting. Other popular transport modes are e-bike and e-scooter (19%) and public transport (13%). And 7% prefer to go on foot.

Tempo Team also discovered that the more time employees travel, the lower their motivation, commitment, and job satisfaction. Another interesting detail, on the other hand, is that the distance between home and work – although not ideal – often offers the necessary time to separate private from professional issues.