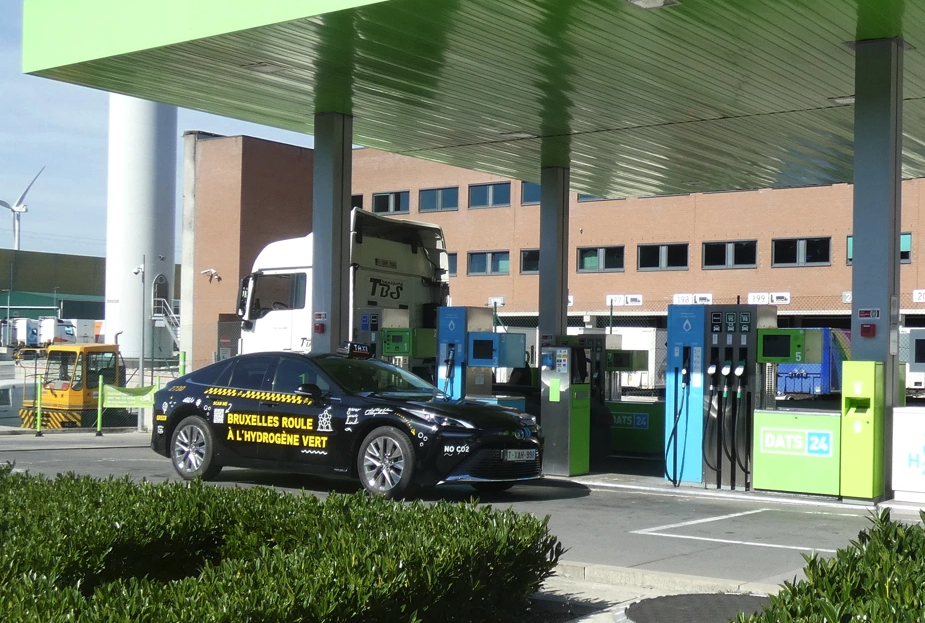 The first hydrogen taxi driving around in Brussels is a Toyota Mirai from Taxis Verts, owned by D’Ieteren. Colruyt in Halle has the hydrogen fuel station for filling up /Taxis Verts

On this Friday, 16 September, Brussels sees the first taxi on hydrogen hitting the streets. It’s a member of the fleet of 500 taxis of Taxis Verts, owned since March by D’Ieteren Automotive. By the lack of a hydrogen car in its portfolio of Volkswagen brands, the D’Ieteren daughter had to fall back on Toyota for a Mirai.

From the 500 vehicles actually in service, only some 40 were electrified at the time of the takeover, and D’Ieteren wanted to change this rapidly. The independent drivers are aided by the car importer D’Ieteren to acquire electric vehicles from the VW Group and charge at EDI stations.

But a hydrogen alternative wasn’t an option until the partnership with Colruyt’s Virya Energy daughter. Virya Energy was founded in 2018 by Colruyt Group and the investment company of the Colruyt family, Korys. It has a 100% stake in the energy branches Parkwind, Eurowatt, Eoly Energy, and Sanchore, which together produce 1 GW of green electricity worldwide. Green electricity is partly used by Eoly to make sustainable ‘green’ hydrogen.

Two trained drivers will use the Toyota Mirai hydrogen taxi merely to gather practice experience with hydrogen used as fuel for taxis, testing range, time to refuel, flexibility, and how the public welcomes them.

The Toyota Mirai of the second generation has an average range of some 650 km with a 5,65 kg hydrogen tank. But in October last year, a Toyota Mirai completed a 1 360 km round trip in Southern California on a single tank. That’s not likely to be achieved in the dense traffic of the Belgian capital.

A hydrogen taxi is already a common sight in the French capital, Paris. These are mostly Hyundai ix35 PCEVs and several Toyota Mirais. Taxi company Hype, running a fleet of more than a hundred H2-powered cabs, has raised another €20 million with French hydrogen pioneers HRS and McPhy in December last year to expand that fleet to 10 000 by 2024, the year of the Olympics.

Hype has committed itself to buy six H2 stations with a minimum of one tonne capacity and two electrolyzers to produce green hydrogen locally. But the ambition of founder and CEO Mathieu Gardies goes further than that. He dreams of rolling out 40 000 zero-emission taxis in 15 new cities in France and abroad by 2025, he told the newspaper La Tribune.