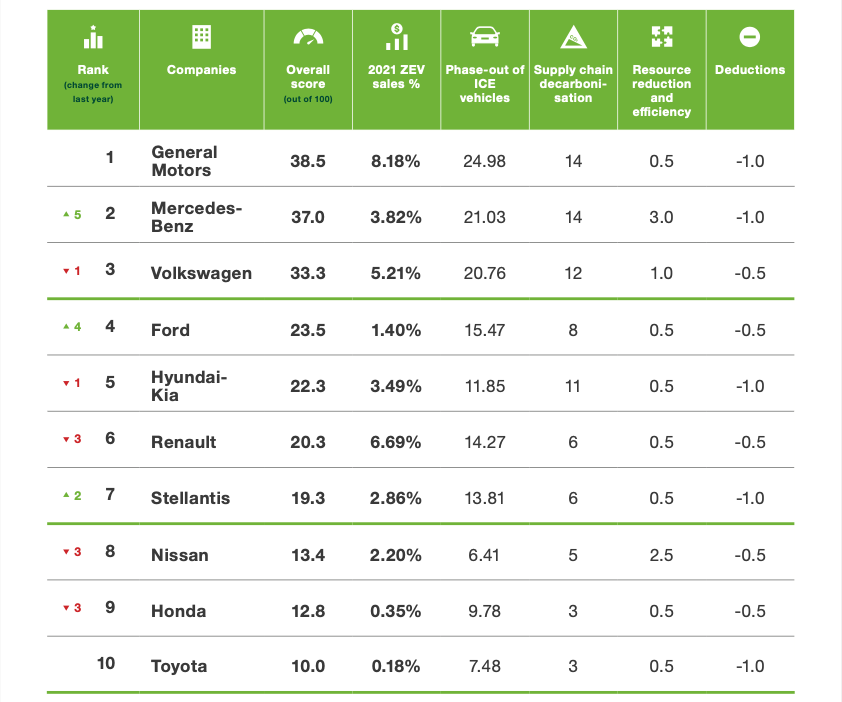 This graph shows the ranking of ten leading car brands, according to their environmental credentials /Greenpeace auto environmental guide 2022

A recent Greenpeace East Asia (GPEA) report ranking global car manufacturers on their environmental credentials has placed Toyota at the bottom of the list. According to the study, the Auto Environmental Guide 2022 discovered that fossil fuels still power 499 out of every 500 Toyota models sold worldwide.

General Motors, Mercedes-Benz, and Volkswagen performed best in the chart. But even though General Motors and Mercedes-Benz reach the top of the list, their ZEV sales are a long way from what is needed to decarbonize road transport by 100% by 2030. Ford, Hyundai-Kia, Renault, and Stellantis are all average performers, whereas Honda, Nissan, and Toyota share the lowest ranking.

While global sales of electric vehicles doubled in 2021, Toyota’s zero-emissions cars made up just 0,2% of total sales in 2021, amounting to the lowest proportion of overall sales out of the top 10 largest car makers around the world. In addition, Toyota and Nissan are the only two companies in the top 10 transitioning slower to ZEVs than the overall global transition rate.

In contrast, General Motors ranked number one for its decarbonization efforts, with EVs making up 8% of total sales, while Mercedes-Benz and Volkswagen ranked second and third, respectively.

The ranking is based on the manufacturers’ progress toward decarbonization, phasing out of internal combustion engine (ICE) vehicles, and resource reduction and efficiency.

The climate emergency is the most critical challenge of our time. Recent natural disasters – extreme heatwaves, heavy rains, wildfires, and floodings – have already provided important reminders of how far into the danger zone we have already plunged.

For the first time in the past five years, the sale of zero-emission vehicles (ZEV) as a share of the overall auto market has more than doubled. However, although the pace of growth in battery electric vehicle (BEV) sales seems rapid, there is still a long way to go if we are to stay within the 1,5°C goal agreed upon in Paris to save us from the worst impacts of climate change.

The percentage of ZEV sales for seven out of ten companies increased by at least 50% in 2021 compared to 2020. However, the highest percentage of ZEV sales is at 8,2%, indicating that none of the manufacturers are transitioning rapidly enough to reach the goal of keeping the earth within a 1,5°C global annual average temperature rise.

The study also discovered a general lack of commitment to decarbonizing steel and upstream materials. For instance, sports utility vehicles (SUVs) consume about one-quarter more energy than medium-size cars. As a result, they release more greenhouse gases (GHGs) during use and increase the automotive industry’s demand for steel. In 2021, these popular car models accounted for 46% of the global market share of private cars.

Despite investors’ protests last year, Toyota continues to have a poor climate policy engagement at home and abroad. In June 2022, the company pushed the Japanese government to ensure allowances for hybrids in its upcoming economic policy, allowing them to be counted equally alongside ZEVs.

The report also defined what the automotive industry should do immediately. First of all, manufacturers should speed up the ICE phase-out. They should take robust actions on the climate emergency at a level of ambition that matches their advantage of scale and global market penetration. Moreover, they should promote renewable energy charging and increase its generation.

The automotive industry should start decarbonizing steel by auditing and disclosing the carbon footprint of their materials, committing to purchasing low-carbon steel, setting steel carbon reduction targets, producing fewer SUVs, and investing in fast-tracking the technological development of zero-carbon steel.