Quantron presents hydrogen truck with up to 1.500 km range 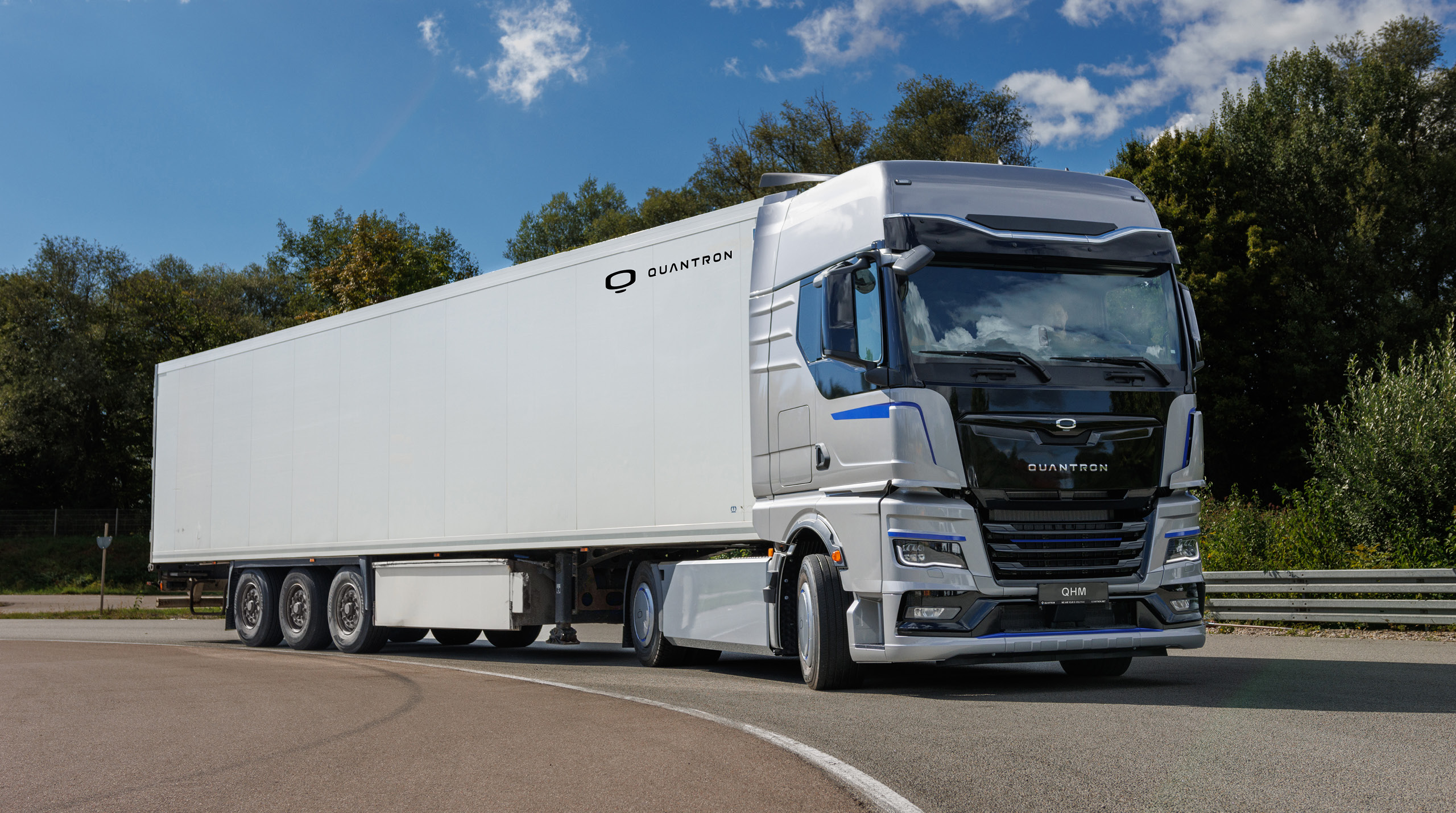 Quantron has presented its QHM FCEV Heavy Truck at the IAA Transportation in Hannover, a MAN TGX-based hydrogen truck that boasts driving ranges of up to 1 500 km. That would make it the longest-range hydrogen truck on the market, with delivery expected in 2023.

The Quantron QHM FCEV Heavy Truck uses two 120 kW FCmove-XD fuel cells from Ballard Power Systems, coupled to an eGen Power 130D E-axle from Allison Transmission, with continuous power of 400 kW and peak power of up to 550 kW. In addition, a 118 kWh battery is present to stock surplus energy and provides peak power to the axle when necessary.

But its party piece is the hydrogen tank capacity, which enables these impressive driving ranges. As standard, the QHM FCEV 44-1000 has a hydrogen tank of 54 kg, which is fully integrated into the chassis and does not compromise on space or size compared to the diesel truck on which it is based. The 54 kg tank’s operating range is around 700 km, according to Quantron. This is comparable to the 800 km range that the Nikola Tre offers.

However, there are two other versions of the hydrogen truck: the QHM FCEV 60-2000 and 44-2000. These offer tank capacities of up to 116 kg, which enables them to drive up to 1 500 km on a single hydrogen tank. This larger hydrogen tank is positioned behind the cabin, although it is unclear how this will impact cabin space or possible trailer configurations.

Quantron also offers an aero package for its trucks, which optimizes airflow compared to the base model MAN TGX, as a sizeable cooling grille is no longer needed. According to Quantron, this aero package improves range by a further 10%, although it’s unclear if the ranges stated above are measures with or without this package.

As well as the QHM FCEV, Quantron also presented the QHM Battery Electric Vehicle (BEV) at the IAA Transportation. The latter uses a battery of up to 392 kWh to power the electric motor. However, this version’s range is limited to 350 km, with charging speeds of up to 350 kW DC.

This, however, is not as impressive as what Daimler Truck has presented at the IAA with its eActros LongHaul, which boasts ranges of 500 km for the tractor unit and charging speeds of up to 1 MW. Still, Quantron retorts by pointing out that the QHM BEV is very flexible regarding body configurations.