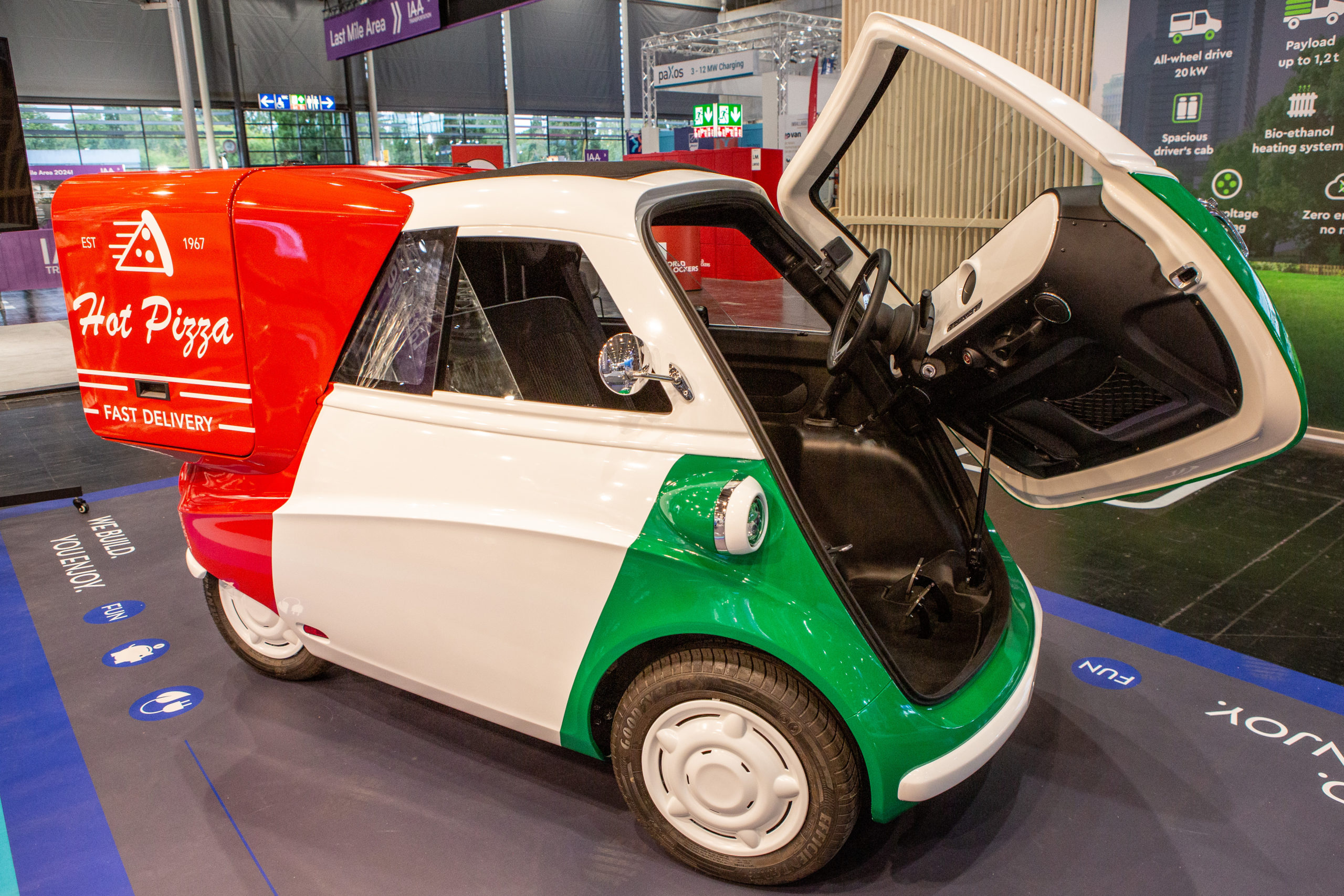 ElectricBrands, best known for their funky XBUS, brought three new vehicles to IAA Transportation in Hannover. The XBUS S, Evetta Cargo, and NITO C+S are all compact electric vehicles designed for business use but with a friendly touch.

The German start-up ElectricBrands first came into the spotlight with two compact electric vehicles based on iconic classic models: the VW Microbus-lookalike XBUS and the BMW Isetta-based Evetta. Both models are getting a utilitarian variant at the IAA Transportation, with a third business-oriented vehicle on two wheels alongside them.

While the XBUS S is designed for last-mile delivery solutions, it’s smaller than the people-moving XBUS. As a result, it will be available as a box ‘truck’, refrigerated or not, or as a flatbed. With a size of only 3,2 m long, 1,43 m wide, and 1,73 m high, the XBUS S loads up to 1 656 liters of goods and has a maximum payload of 750 kg. Its battery capacity of 18,4 kWh gives it a range of 120 km, while 10 kWh of those batteries are interchangeable for fast ‘recharging’.

The box truck versions also feature up to 6 m² of solar panels to stretch the electric range further, which can be especially useful for the refrigerated version. ElectricBrands plans two chassis variants and nine storage modules, with delivery scheduled for 2024.

The Isetta-based Evetta also gets a Cargo delivery version, which seems less logical but makes it a more distinctive choice. ElectricBrands gives a little food or coffee truck as potential business case examples. The Evetta Cargo is slightly larger than the XBUS S in size and storage capacity, with up to 1 950 liters available, although the maximum payload is somewhat lower at 600 kg.

Its smaller 14 kWh battery also gives it a more extensive range of up to 150 km, with a top speed of 90 km/hour. This small electric commercial vehicle is also closer to production, with a projected 2023 launch date and an expected price of 19 990 euros.

ElectricBrands enters the two-wheeled delivery space with the Nito C+S (Cargo and Share) electric scooter. The manufacturer promises a long service life and offers it to transport companies that need access to car-free zones in city centers.

It’s meant only for lighter goods, though, with a payload of up to 100 kg. Two versions will be available: an L1 version with a maximum speed of 45 km/hour, eliminating the need for a motorcycle license, and an L3 version with a top speed of 90 km/hour.

The Nito C+S features the same powertrain as the existing Nito NES scooter, with a 72 V and 35 Ah battery powering a 4 kW hub motor, although range figures are not given. Deliveries of the Nito C+S are also expected in 2023.