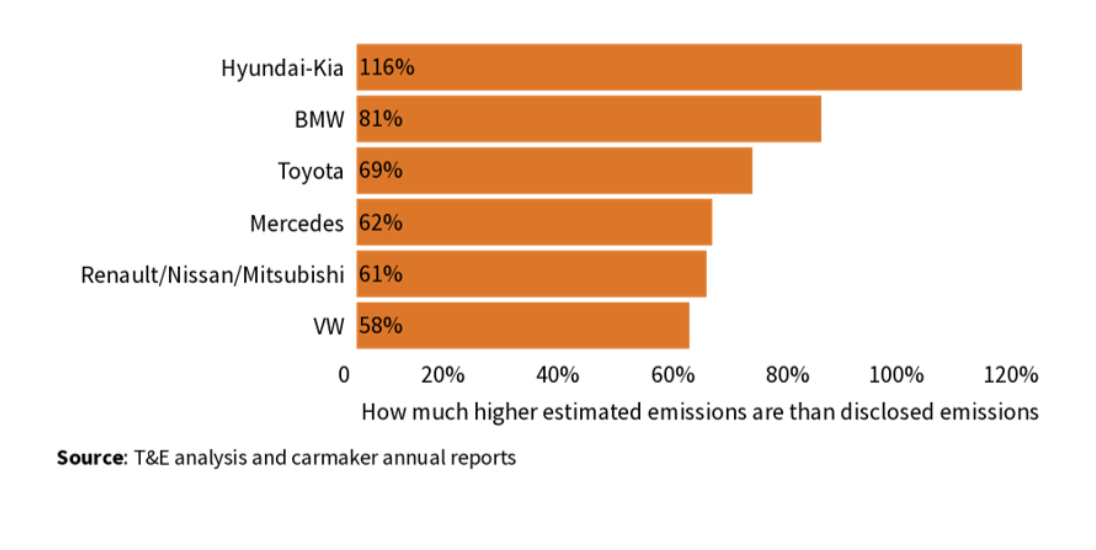 According to the NGO Transport & Environment, the emissions of carmakers are 50% higher than reported /T&E

The results of a new report issued by the organization show that carmakers’ global emissions are, on average, 50% higher than what they report, with Hyundai-Kia and BMW underreporting emissions by as much as 115% and 80%, respectively.

In 2023, the EU will require financial institutions to disclose their scope 3 emissions. Greenhouse gas emissions are categorized into three groups (Scopes) by the most widely-used international accounting tool, the Greenhouse Gas (GHG) Protocol.

The new requirement will hit asset managers with exposure to carmakers hard. Unlike manufacturers of furniture or mobile phones, the vast majority (some 98%) of a car company’s emissions come under scope 3, primarily the use of their cars.

T&E’s analysis shows that carmakers’ already high scope 3 emissions are likely far larger than officially reported. Luca Bonaccorsi, director of sustainable finance at T&E, said: “For green investing to be effective, we need accurate data. Unfortunately, carmakers are trying to pull the wool over investors’ eyes by underreporting the lifetime emissions of their cars. This makes a mockery of carmakers’ green claims.”

Carmakers base their total reported emissions on several factors, such as the average size of the vehicles, where the cars are driven, and the lifespan of vehicles. Carmakers, on the whole, have used selective data to reach a lower figure. Specifically, the WLTP consumption figures and the estimated lifespan of the cars are targeted by T&E.

Toyota, for example, bases the lifetime average emissions of its vehicles on 100 000 kilometers, and that’s scarcely believable, says T&E. On the other hand, the WLTP-based emissions are still based on laboratory measurements and are still far from reality, T&E claims.

By the end of 2022, Morningstar, a US-based financial firm, estimates that some 50% of all new financial products sold will be environmental, social, and governance (ESG) based. However, ESG ratings fail to capture the companies’ true climate impact, says T&E.

Despite CO2 emissions being the most important environmental indicators, they represent less than 1% of the ESG rating for S&P and MSCI, two of the world’s leading ESG indexes. T&E calls on the EU to regulate and harmonize the methodology for ESG ratings to ensure consistent and transparent data reporting.

The results of the new T&E report show that car companies, from an investment perspective, are almost as carbon-intensive as the oil industry. At today’s prices, €1 million invested in an average of oil giants Exxon Mobil, BP, and Shell finances around 5 000 tons of CO2 equivalent (CO2e).

The same amount finances more than 4 500 t CO2e in the car sector. In some cases, the carbon intensity of carmakers is significantly higher: nearly 10 000 tons if invested in Renault-Nissan-Mitsubishi and 7 000 tons for Honda, according to carmakers’ own reporting. 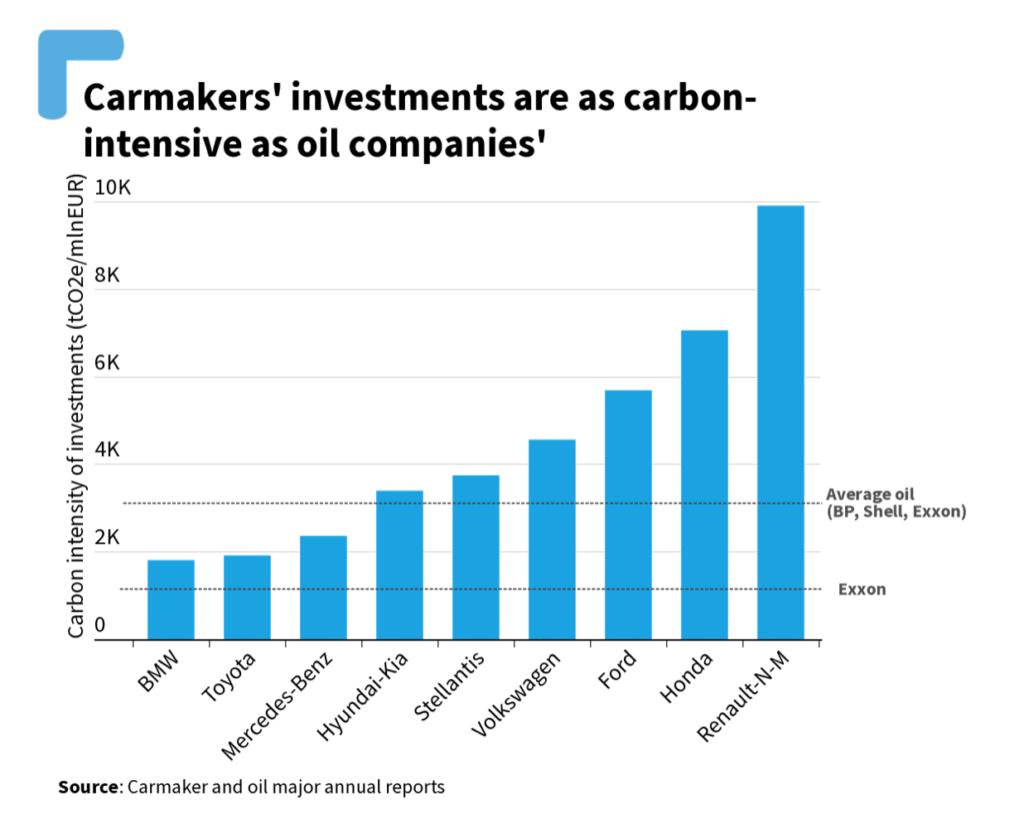 Luca Bonaccorsi concludes: “According to official disclosures, a euro invested in a car company finances virtually the same amount of carbon as a euro in an oil company. This should be a wake-up call for the financial industry. Asset managers wanting to avoid a ticking carbon bomb will have to start ditching carmakers that continue to sell polluting cars.”

According to Mathieu Maurin of Iceberg Datalab, a source for extra-financial data on companies, there is “a serious gap of at least 20% between the data published by the car companies and their own data.”

Nevertheless, Maurin notes that “the car companies actually publish data and are fairly transparent about their calculations. That’s in big contrast with other sectors like the agri-food industry.”