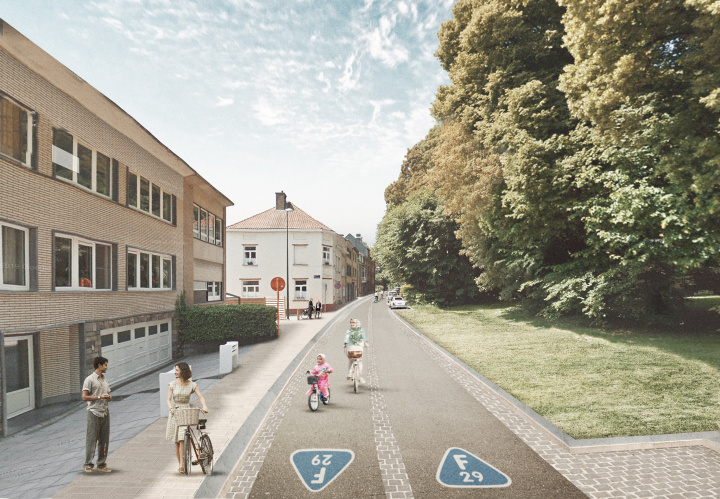 The Broekstraat in Tervuren, for instance, will become more bicycle-friendly: cyclists coming from Brussels will have sufficient space to cross motorized traffic heading toward the Tervurenlaan /werkenaandering.be

If everything goes according to plan, cyclists will get a fast, safe, and comfortable bicycle connection between Brussels, Tervuren, and Louvain. The new F29 bicycle highway will be 16,5 km long and is expected to be ready by 2025.

The project is part of the planned beltway constructions (‘Werken aan de Ring’) to offer cyclists more and better cycling infrastructure. In the meantime, the existing bicycle infrastructure will be improved.

The F29 will connect both highways – the Brussels and Louvain beltway – via the Plateau of Duisburg and the Park of Tervuren. The project includes three new bicycle bridges and a tunnel to avoid immediate contact with cars, trucks, and public transport. The project represents a 20-million-euro investment.

Today, it is perfectly possible to cycle from Louvain to Brussels via the F3, and the environmental permit is underway to construct a new part of the F203 that will mainly run parallel with the E40 freeway.

The third bicycle highway stretch, the F29, will start from the Louvain beltway, and continue via Heverlee, the Plateau of Duisburg, the Park of Tervuren to the Quatre Bras junction, where it will connect with the reinstalled bikeway between the Brussels beltway and the Brussels Region.

So, cyclists will have three bicycle highways to guarantee the connection between Louvain and Brussels. Together, they will provide a finely-woven bikeway network linking both regions.

“Hopefully, they will entice more commuters into cycling,” said Marijn Struyf in the newspaper Het Laatste Nieuws. Struyf is the spokesperson for De Werkvennootschap (DWV), the Flemish organization that supports large-scale mobility projects.