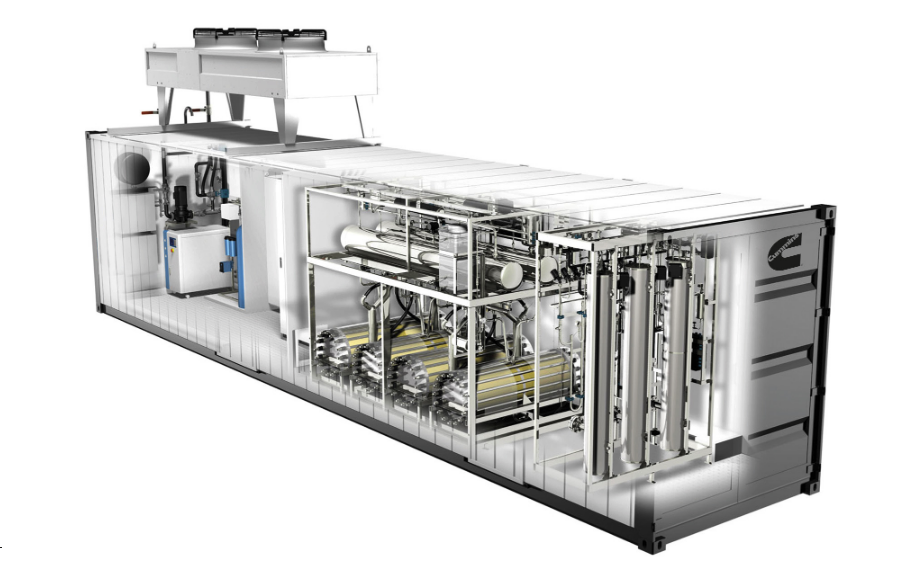 The expansion of its Belgian electrolyzer plant in Oevel will allow Cummins to scale up its products from 0,5 to 100 MW today to 500 MW capacity in the future /Cummins

American global power technology provider Cummins, known for decades for its diesel and gas engines, is quadrupling the capacity of its Belgian hydrogen electrolyzer plant in Oevel, Hydrogenics Europe, which it acquired in 2019. Production halls were doubled, and capacity will be quadrupled from 250 megawatts to 1 gigawatts with 150 people more to be hired.

With the help of Europe, Cummins is investing several tens of millions in its plant in Oevel to be able to build larger electrolyzer systems for its clients to make ‘green’ hydrogen. Today, we’re talking about installations from 500 kW to 100 MW, but scaling up to 500 MW is in the pipeline.

Hydrogenics signed a contract to supply a 2.5-megawatts electrolyzer to Hysetco in April to make green hydrogen for the world’s largest fleet of zero-emission taxis in Paris. Hype, currently running a fleet of more than a hundred H2-powered cabs (mostly Hyundai and Toyota Mirai models), wants to expand that fleet to 10 000 by 2024.

With a bit of help from the EU

The investment in Oevel is partly funded with money from the EU Commission’s first €5,4 billion IPCEI project, approved in July. Called ‘Hy2Tech’, it aims to develop novel technologies for the production, storage, transportation, and distribution of hydrogen and applications in the mobility sector, with a focus on the end-user.

In Oevel, Cummins specializes, among others, in the newer PEM electrolyzers. These use a Proton Exchange Membrane and a solid polymer electrolyte, with deionized water as the raw base material. When current is applied to the cell stack, the water splits into hydrogen and oxygen, and the hydrogen protons pass through the membrane to form H2 gas on the cathode side.

The more commonly found technique in the industry is alkaline water electrolysis, where two electrodes operate in a liquid alkaline electrolyte solution, separated by a diaphragm. Belgian John Cocqueril, with headquarters in Seraing (Liège), is a major worldwide player in that field.

An electrolyzer is, in fact, the opposite of a fuel cell, where hydrogen and oxygen from the air are combined to make electricity to drive an electric motor. Cummins has delivered more than 600 large electrolyzer installations worldwide but also makes fuel cell stacks for commercial vehicles from different manufacturers for several years.

At IAA this month, it showed a medium-duty concept truck, a converted Mercedes-Benz Atego 4×2,  powered by the 6.7-liter B6.7H hydrogen internal combustion engine. It delivers 290 hp (216 kW) and 1 200 Nm peak torque. The 700-bar pressure hydrogen storage system with 40 kg of hydrogen offers a range of 500 km.

Cummins says its performance is equivalent to that of a similar displacement diesel engine and compatible with the same transmissions, drivelines, and cooling packages, which makes converting diesel trucks easy.

That H2-ICE engine complements the 15-liter X15H hydrogen engine, presented in May of this year. The latter is aimed at long-distance trucks of up to 44 tons, delivering 530 hp (395 kW) and a peak torque of 2600 Nm. Trucks with enough hydrogen storage are estimated to offer a potential operating range of over 1 000 kilometers.

Cummings, headquartered in Columbus, Indiana (US) since 1919, employs over 59 900 people worldwide and has three production plants in Belgium (Oevel, Mechelen, and Rumst). In Oevel, the staff grew from 75 in 2020 to 220 today, with an extra 150 to be hired.