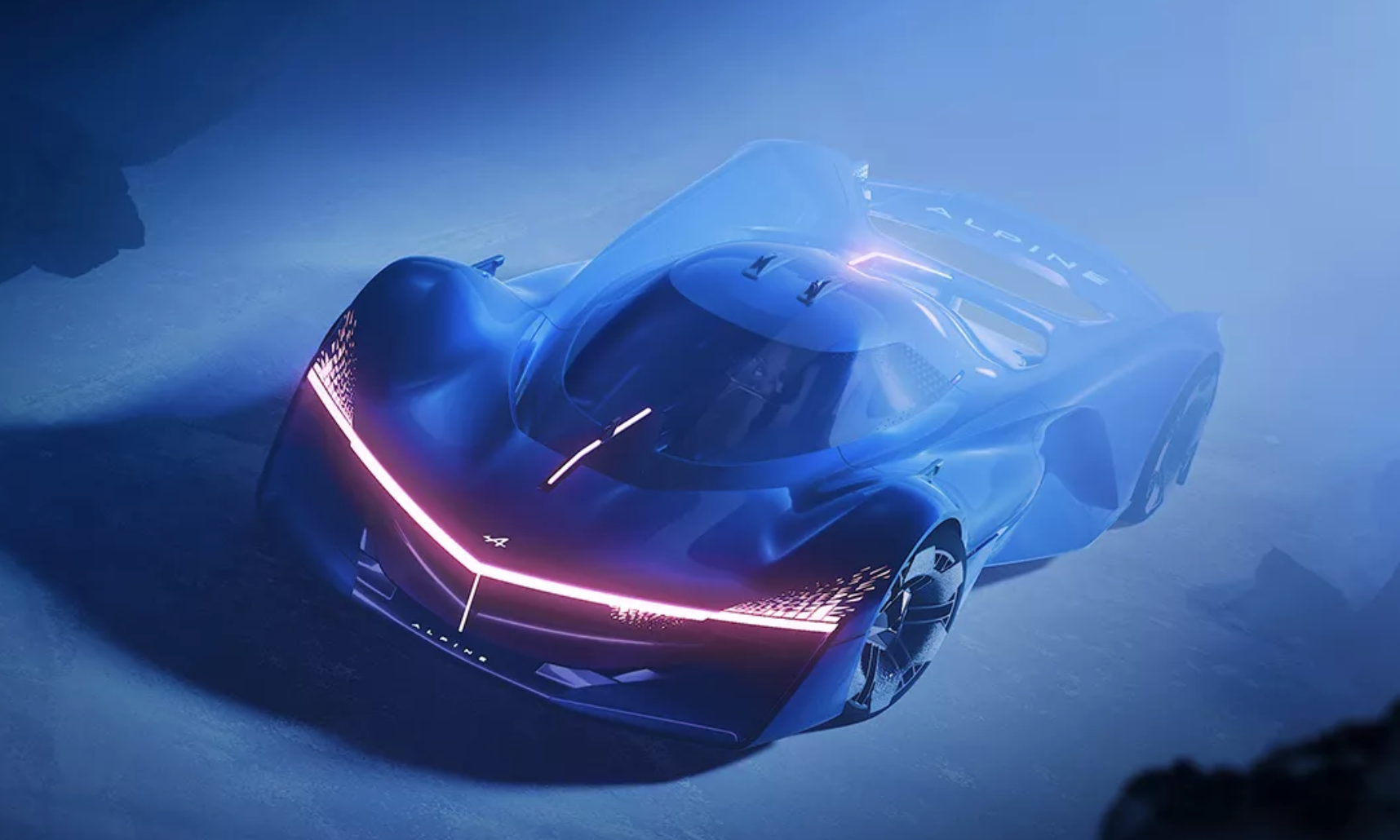 At the Paris motor show, the Mondial, Renault’s sporty sub-brand Alpine is showing the Alpenglow concept, a car ” that is the starting point for all future Alpine car designs, technologies, and breakthroughs, all the while remaining true to the brand’s history. The aim is clear: combining full sustainability with driving (and racing) pleasure.

“Alpenglow is a glimpse into Alpine’s roadgoing and racetrack models of tomorrow, says the press release. “Alpenglow is also more than a concept car: it is a brand manifesto, the treatise enshrining its vision and development roadmap, a tangible symbol of the Renaulution plan, paving the way for the upcoming Dream Garage models.”

“Alpenglow’s mighty and lavish design hints at what Alpine cars will be like tomorrow and at our vision for motorsports moving forward,” says Alpine CEO Laurent Rossi. “With hydrogen technology on board, we are strengthening our commitment to a responsible future and to keeping driving pleasure as real as ever.”

Alpenglow stands for a future where racing cars as well as the upcoming generations of Alpine products release clean emissions. “Green” hydrogen is one of the solutions that the brand is considering for sustainable mobility. A hydrogen-powered engine releases practically nothing but steam during combustion. Water, in other words, is central to Alpenglow’s design. It underlines its purity and its power, says the press release.

In this single-seater, the driver sits on the center line, between two hydrogen tanks, and becomes one with the cockpit. This is the idea at the core of the Alpenglow concept car, which wants to capture the very essence of driving, The geometric steering wheel is inspired by LMP1 (Endurance) racing cars.

A red line cuts across the car lengthways. It underlines the driver’s position, trying to be at one with the car, in a central, exclusive place that connects him/her to the road and their surroundings.

The concept features Alpine’s new signature lights and snowflake-shaped rims on the wheels. The triangle built into the center of the wheels underscores this impression. Like the triangles in the steering wheel, the ones on the wheels contain hydrogen and have a built-in window into the Alpine logo, to attract attention to the brand’s singular signature.

This concept car is more than 5 meters long, over 2 meters wide, and less than 1 meter high – a dream car’s proportions. According to Alpine, it is exceedingly agile and its sculpted shapes encapsulate Alpine’s future design language.

When one approaches the car, the opaque areas become transparent, providing a glimpse of the inner workings. The red zones representing heat are counterpointed by penetrating blue, the Alpine color. “The magic is hidden, and the elements appear and disappear, to unveil this object one detail at a time,” says the press release.

Alpenglow is Alpine’s first step on the path to sustainable solutions for clean mobility, the company claims. This mobility will combine carbon-neutral systems, tapping into the natural complementarity between vehicles running on an electric battery (BEVs), vehicles running on a fuel cell (FCEVs), and vehicles with hybrid internal combustion engines using a sustainable fuel – possibly green hydrogen.

This is why Alpine is looking into a technology that could prefigure the brand’s racing and roadgoing cars. A hybrid hydrogen internal combustion engine is environmentally-friendly and comes with the inimitable driving pleasure that this technology provides, including sheer might, weightlessness, and enthralling soundscape. The latter is not to be neglected when one wants the enthusiasm of real car and racing lovers.

With its two cylindrical hydrogen tanks at 700 bar, Alpenglow is as lightweight as the rest of the brand’s cars and treats drivers to the ultimate experience as well as clean emissions.

To develop this technology, Alpine is leveraging expertise from the Renault Group entities that have built a full ecosystem revolving around hydrogen, which includes HYVIA. Alongside the Formula 1 Grand Prix in France, last July, the BWT Alpine F1 Team and HYVIA announced plans to enter into a partnership to invest together in state-of-the-art technologies and the transition to sustainable mobility.