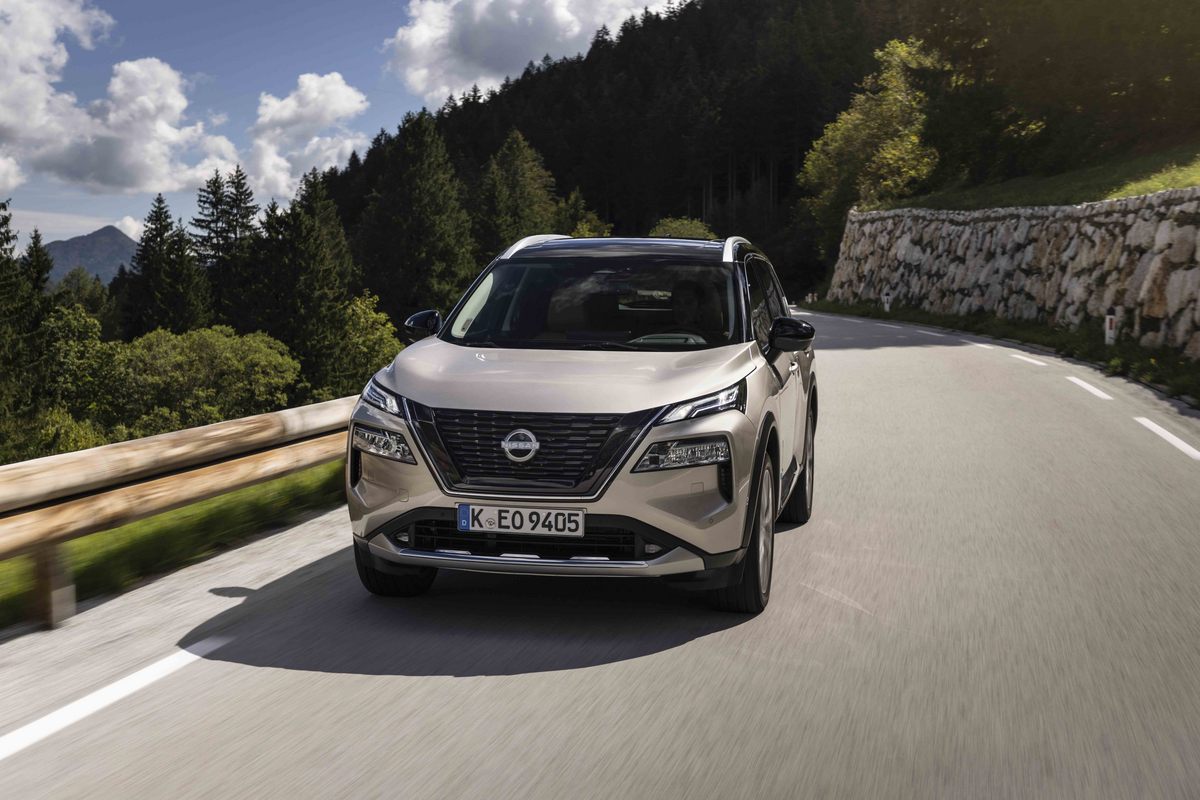 One pedal driving, a typical feature for an electric car, proved to be a relaxed style of driving with the Nissan X-Trail 4ORCE in the mountains /Nissan

After turning the Qashqai into an electric car with a permanently running generator on gasoline, Nissan did the same trick with another success number, the X-Trail. But this time, with more muscle and 4WD, adding a second 94 kW motor on the rear axle.

We got the chance to try out what Nissan likes to call its ‘go-anywhere car’ in the beautiful mountain scenery of Slovenia. Here, this soft 4×4 fits in very well. That is if you’re not obsessed with being first of class on sustainability, as it still throws up a considerable 145 g/km of CO2.

Nissan says it’s proud of its ‘e-Power’ technology it first tried out in Japan with the Note, instant success in an urban environment where people like to think electric but don’t have the means to charge it at home.

Charging or range anxiety is the least to worry about, as this electric car isn’t fed by a massive battery (only 2 kWh) but gets its power from a generator on gasoline which refs up when more energy is needed.

This one has no connection with the wheels at all, unlike a classic (plugin-)hybrid where an electromotor drives the wheels as long as there is juice left in the battery, and the combustion engine kicks in when needed and takes its turn to drive the wheels.

The ‘e-Power’ is delivered by an electric motor (150 kW) in the 2-wheel drive version. When we’re talking about e-4ORCE (pronounced ‘fource’), it’s a dual motor system with an extra motor on the rear axle delivering a total of 157 kW (213 hp).

It makes the X-Trail a perfect four-wheel drive without needing the complex drive shaft system of a classic 4×4; it’s just software controlling all individual wheels. And it does that job seamlessly, without the driver doing anything in particular.

There is a selection knob on the center console to choose a driving program, from highway over standard, snow, and eco-driving to ‘off-road’.

Demonstrated on a specially configured dirt track near the airport, the X-Trail coped quite comfortably with some pretty tricky situations when leaving the asphalt, like steep, slippery slopes or rough road surfaces.

Not your average family experience, but as Nissan sees this car suited best for the X-generation that likes adventures but needs the SUV to bring the kids to school as well during the week, it’s a good compromise.

After all, Nissan knows what it’s talking about after three previous generations of the X-Trail being big hits. It sold 1,7 million of the third generation (2014-2021) under the ‘Rogue’ name in the US, 1,2 million in China, and 230 000 in Europe, for instance.

So it was a question of living up to the expectations of its loyal clientele for this fourth generation, and to that extent, it won’t be a disappointment.

De self-willed e-Power and e-4ORCE technology give the boxy SUV the agility and instant response of an electric car. It doesn’t feel as heavy as it looks, as power is abundant.

The advanced traction management is constantly active, giving stability and traction in all driving scenarios, such as damp, muddy, oily, icy, and snowy roads, Nissan claims.

The constant motion control of the body will be welcomed by people sensitive to motion sickness, especially when seated in the back. As an emergency solution, and for an extra 850 euros, the X-Trail has two extra extendable (child) seats on a third row.

All this comfort and driving pleasure comes at a price, though. There is a considerable upfront cost of €51 100 to €60 650 for this e-4ORCE version, compared to the €43 300 introductory price of the classic ICE-powered X-Trail (mild hybrid).

A lot of gasoline

And there is still (quite a lot of) gasoline to burn. You can keep it under five liters per 100 km if you handle the throttle with the utmost care.

But when you start climbing in the mountains, an average of 13 liters shows at the top, eased when descending to 8,7 liters in our case.

You won’t win the price of the most environmentally friendly driver with that. If your ‘green’ conscience is troubled by that, maybe you should take a look at a fully electric alternative, like the Ariya e-4ORCE with 225 kW (306 hp) that draws 500 km range out of its battery. Prices for this one go from €58 600 to €63 100.