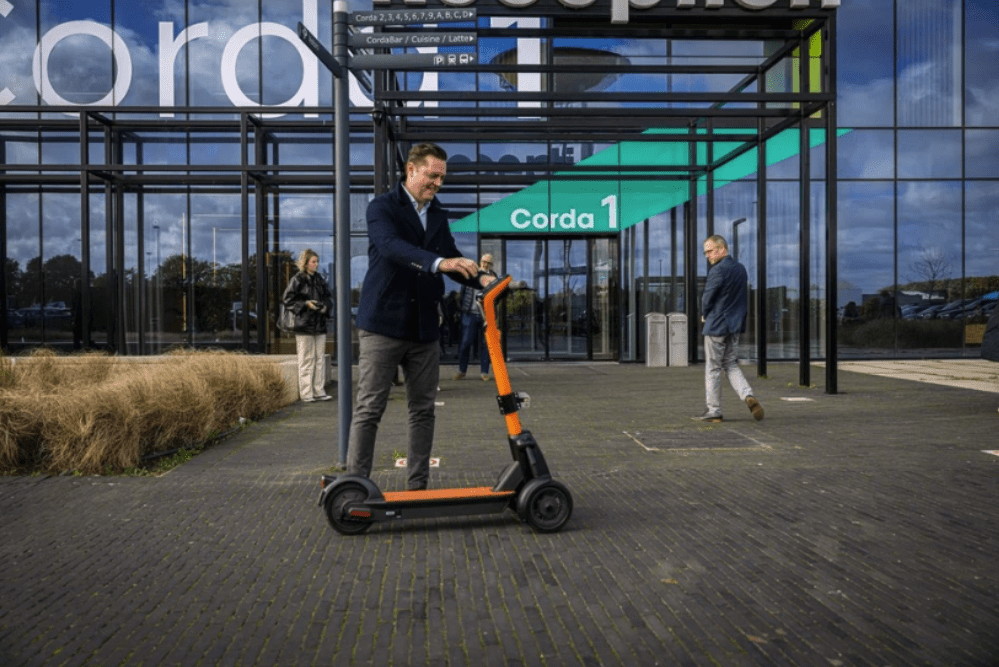 On the Hasselt Corda Campus, the self-riding Segway Ninebot Kickscooter T60 automatically returns to its charging station after its passenger reached his destination /Corda Campus

Corda Campus, the Belgian tech campus in Hasselt (Limburg), comes with a ‘European scoop’: a Chinese self-driving e-scooter will pick up passengers on the campus, let them drive to their destination, and then returns fully autonomous to one of the five charging stations within the site.

The vehicle is the Chinese Segway Ninebot Kickscooter T60, a semi-automatic, teleoperating, three-wheeled shared scooter. It was shown to the world for the first time in August 2019 as a way for free-floating e-scooter fleets to no longer have to send out people to pick them up, recharge, and redistribute them.

Beijing-based scooter maker Ninebot announced Uber and Lyft as key customers, but the corona pandemic put rollout plans apparently on a back burner. Now it’s one of the first of the kind to be deployed in Europe, Corda Campus says. It is AI-driven and remotely controlled by the Segway cloud platform to distribute them over the campus where needed. And it features automatic dock return capabilities for charging.

The vehicle uses artificial intelligence (AI) and can achieve a 6 km/hour speed. It is equipped with a fisheye camera to get a full view of the surroundings and intelligent sensors to ‘see’ and avoid obstacles on its way.

Once the passenger has stepped ‘on board’ and taken over the handlebars, the vehicle acts like any scooter and can ride up to 20 km/hour. As soon as the passenger gets off the vehicle again, the e-scooter returns autonomously to one of the five charging points on the Corda Campus site in Hasselt.

The self-riding e-scooter project in Hasselt is an experiment for the time being. It’s an initiative of the Flemish government, the province of Limburg, the city of Genk, and several stakeholders, relying on European support. The province of Limburg freed a budget of €95 000 for the pilot project.

The project on Corda Campus in Hasselt will run for six months. Then, if it is a success, the initiators will consider the rollout on other campuses. Today, those unstaffed vehicles are not allowed on public roads, but once the legal framework is ready, these scooters could be perfectly useful in urban or industrial areas.

Apart from the self-riding Segway scooter, the Corda Campus also exploits 28 ‘normal’ e-scooters to bring people to and from the inner city. Corda Campus groups 250 companies, employing 5 000 people, all active in the innovative sector.

The name Segway must ring a bell. The first self-balancing two-wheeled Segway model was launched in 2001. In theory, the vehicle was simple to use. When the rider leaned forward, the whole thing progressed. When leaning back, the device came to a standstill.

However, in practice, the Human Transporter, as it was called, turned out to be much more challenging to drive and never really convinced the market. It was only popular among tourists. The parent company Segway was finally taken over by the Chinese company Ninebot, but even that could not turn the tide. The Segway never really managed to dominate the street scene.