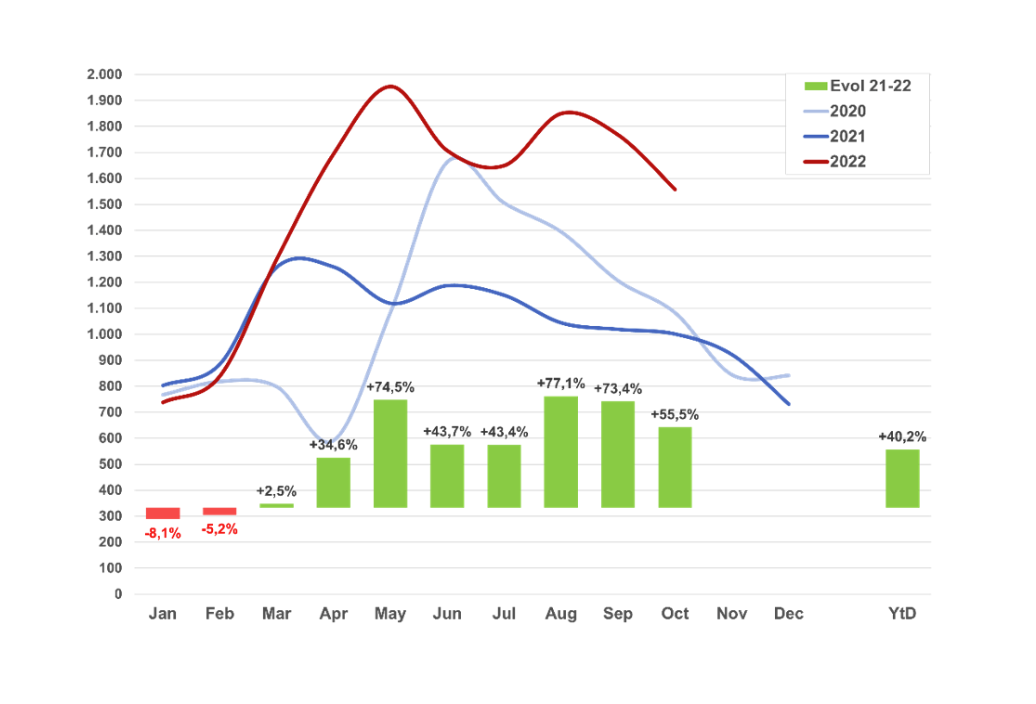 This illustration clearly shows the growing popularity of speed pedelecs over the last two years /traxio.be

Speed pedelecs, the fast-riding e-bikes, are increasingly popular on Belgian roads. In October, mobility federation Traxio noted 1 557 new registrations, 556 more (+55%) than in the same month last year. Total new registrations in the last ten months were 15 041, or an increase of 40,2% (4 316 units) compared to 2021.

Even second-hand speed pedelecs are much sought after. In September, the number of registrations went up by 34,2% (459 units), totaling up to 4 950 units this year – a growth of 103,3% compared to last year.

Filip Rylant, spokesperson for Traxio: “In 2021, 12 377 new speed pedelecs were registered in Belgium. This year in October, we already exceeded that number: with almost two months to go, we’re already 2 664 units above last year’s figure.”

“Apart from the new bikes, 459 used speed pedelecs were registered, bringing the total second-hand market toward 5 000 units, or an increase of 103,3% compared to 2021. A remarkable trend, since speed pedelecs are a relatively new phenomenon.”

Speed pedelecs are far more prevalent in Flanders (95,1%) than in the rest of the country. Wallonia and Brussels represent the remaining 4,9% with 428 and 307 units, respectively.

Although employees in Wallonia now also benefit from premiums for bicycle use for commuting, the number of speed pedelecs in Wallonia and Brussels remains marginal compared to Flanders. Still, both Brussels and the Walloon provinces are gradually showing more interest in speed pedelecs: Namur (+49%), Hainaut (+39%), and Liège (+38%).

The Brussels Capital Region registered 307 new speed pedelec (+38%)ear that the fast-riding bike is less popular in urban surroundings with complex traffic situations and fierce competition from the extensive offer of shared e-bikes and e-scooters in the Brussels region.

Most new speed pedelecs (49,6%) were privately bought vehicles, although leasing is becoming increasingly popular. Companies have discovered the ease of use of a leasing formula: less administration and no worries about maintenance, insurance, or residual value.

“Speed pedelecs remain popular and are even gaining in popularity,” Traxio Velo concludes. “Recent reports about the government’s intention to tax company cars (the so-called ‘salary cars’) and fuel cards make people opt for a bike.

Besides, a  bicycle allowance of 0,25 €/km is an attractive advantage compared to a wage reduction due to the ‘benefit in kind’  to be paid and the peaking fuel prices.”