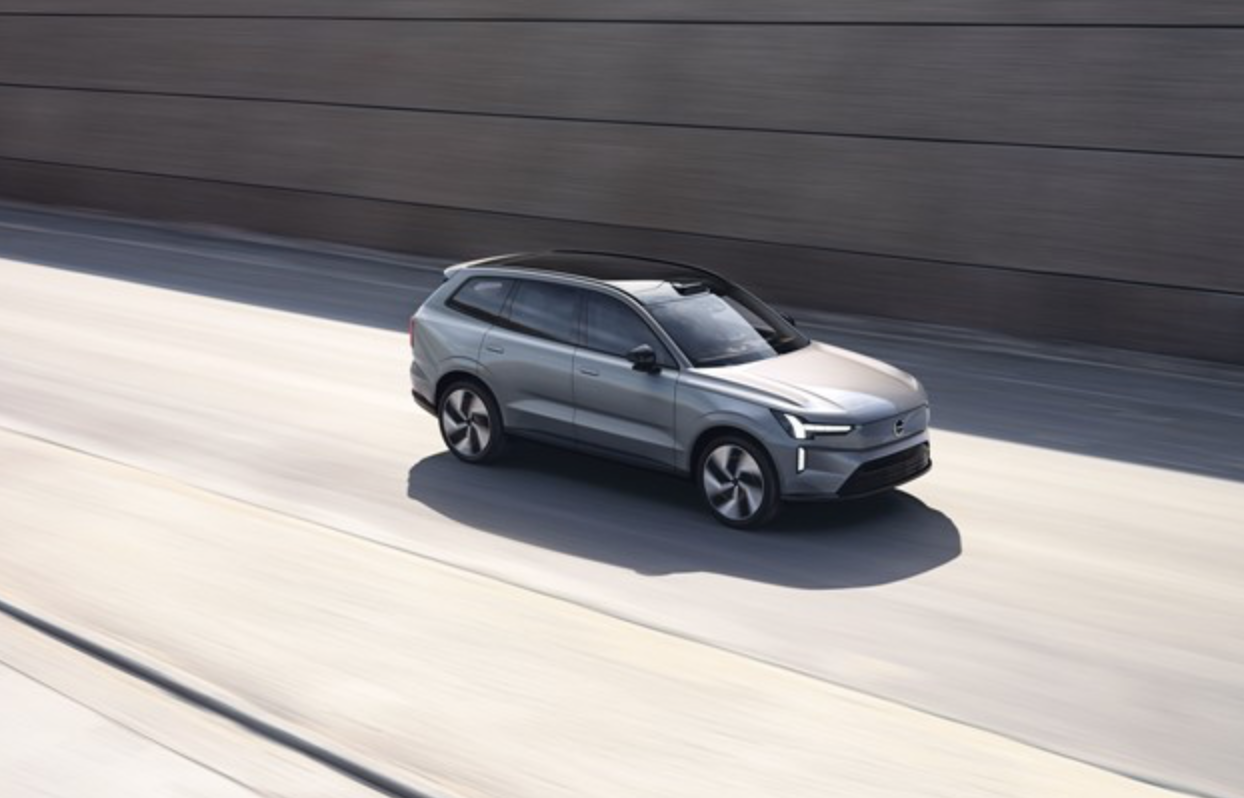 The new EX90 from Volvo wants to give all the goodies of its successful predecessor, the XC90, but than completely electrically driven / Volvo

Yesterday, Volvo Cars unveiled the EX90 in Stockholm. The revamped e-SUV and XC 90 successor is exclusively electric and boasts numerous new features. Visually, on the other hand, it could pass as a facelift of the familiar model. Those who fancy a somewhat bolder or more innovative design have to look for its technical brother under the Geely umbrella, the Polestar 3. The EX90 will be priced over € 100 000.

Volvo also expects the EX90 to “mark the beginning of a new era for our company, one in which we are setting the decisive course for an all-electric future”. That’s why the EX90 is exclusively available in a battery-electric format.

There are no fundamental surprises in the drive technology of the EX90. Polestar had already presented its interpretation of a luxury-class electric SUV on the same platform in October and published the technical data. Like the Polestar 3, the Volvo EX90 has a 111 kWh battery, of which 107 kWh are net usable.

Polestar had already specified that the battery consists of 204 prismatic cells installed in 17 modules of 12 cells each, Volvo now makes public that the cells in the EX90 come from Chinese battery giant CATL. The charging system is also the same, the 11 kW onboard charger is bidirectional and can both charge and discharge the battery. With 11 kW, the battery is filled in eleven hours. If the battery is charged at a simple household socket, a complete charging process takes… 57 hours.

The top model is called ‘Twin Motor Performance’ and has a 380 kW all-wheel drive with two engines and 910 Nm of torque. It can accelerate to 100 kph in 4,9 seconds and has the (limited) top speed of all Volvos: 180 kph. The combined WLTP range is 590 kilometers. There’s a slightly different variant of this powertrain, but only for the U.S. market.

The second variant is simply called ‘Twin Motor’. The power is still a generous 300 kW, with a maximum torque of 770 Nm. From a standstill, it’s one second slower to 100 kph, the top speed is the same.  The range is only minimally higher at around 600 kilometers.

With a length of 5,04 m, a width of 1,96 m, and a height of 1,75 m, the EX90 is for sure not a small car. With the familiar proportions and many similar but newly interpreted design solutions, it could almost be seen as a facelift of the XC90. But that could be purposeful:  the current XC90 debuted in 2014 but still doesn’t look old-fashioned or stale. Volvo has clearly preferred to further develop what has worked well for eight years. In their press release, they talk about “a new classic in Scandinavian design”.

At the front, the LED lights in the shape of ‘Thor’s hammer’ introduced with the XC90 appear again, but now for the entire matrix headlamp. Noticeable design features: not even a suggested radiator grille, conspicuous lidar sensors at the top of the windscreen, and flush integrated door handles. The LED taillights at the rear have been redesigned, but are instantly recognizable as Volvo. 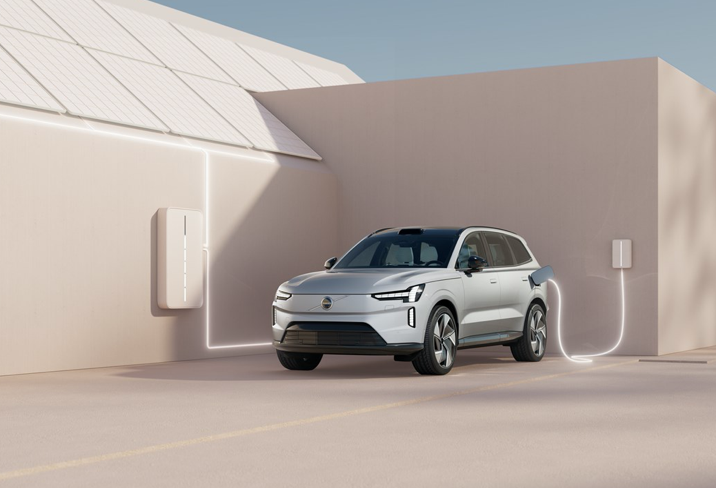 Instead of the now popular dynamically sloping roofline (like the Polestar 3), Volvo has opted for utility and given the EX90 very similar proportions to its predecessor. The EX90 also remains optionally available as a seven-seater, because the higher roofline makes this possible.

With three rows of seats, 365 liters of luggage still fit in the boot. In the standard configuration as a five-seater, it is 655 liters or 1 010 liters loaded roof-high. Folding down the back seats gives up to 1 915 liters, plus 65 liters in a compartment under the boot. In the front, there’s a very shallow ‘frunk’ of 37 liters. Amazingly small, when you see the bulk of the front compartment.

The length of the bonnet and the front and rear overhangs make it clear that the SPA2 platform of the EX90 is just a further development of the SPA combustion engine platform and not a newly designed and dedicated electric platform. No short overhangs, so typical of electric cars, and no stretched wheelbase for more interior space.  Mind you, because of the size the space remains good,  but the EX90 does not offer the flexibility and additional options of a pure electric vehicle platform.

Inside, the dashboard is dominated by a 14,5-inch touchscreen based on a Google system. The EX90 has a Lidar unit for the driving assistance systems, which is supposed to be able to detect small objects at a distance of several hundred meters. Volvo’s assistance systems not only include the exterior but also the interior, with special sensors and cameras that measure eye concentration. 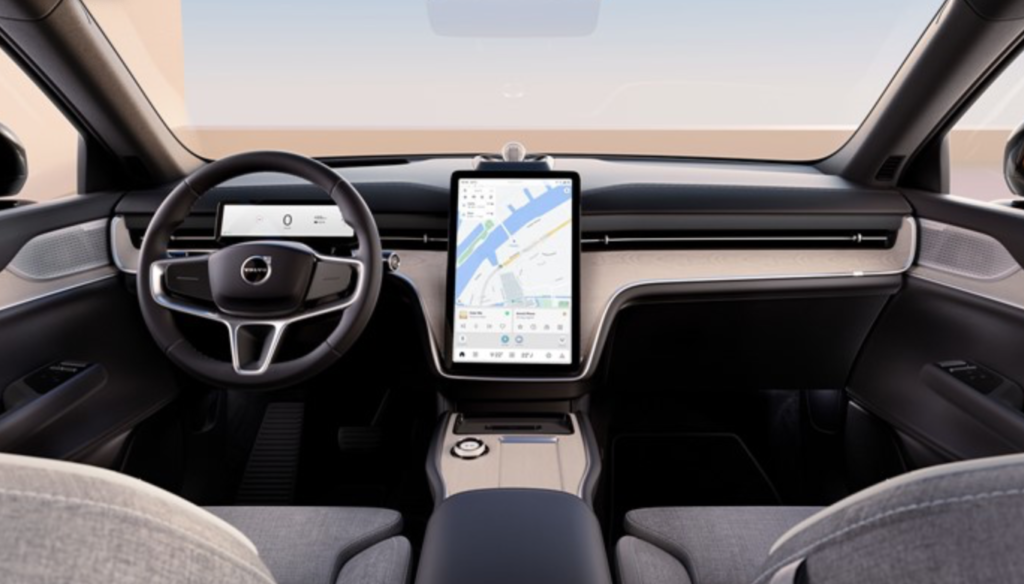 Of course, the materials used inside will be natural and sustainable. Volvo aims to be a circular and climate-neutral company by 2040 and the new interior has to reflect this. For music lovers, there’s a new Bowers & Wilkins audio system with Dolby Atmos. For an enhanced sound delivery just where it is needed, there are also loudspeakers inside the headrests.

The bulk of the car and its generous battery size also mean that the EX90 weighs in at 2,8 tons, a bit heavier than the Polestar 3. The towing capacity is 2,2 tons, very decent for an electric car, and 100 kilograms can be transported on the roof.

The EX90 is the second all-electric Volvo model after the much smaller and very successful Volvo XC40 Recharge and its coupe derivative CX40 Recharge. Volvo intends to replace all of its remaining ICE models with fully electric ones every following year. The company has just divested its ICE powertrain division (called Aurobay) to mother-holding Geely. 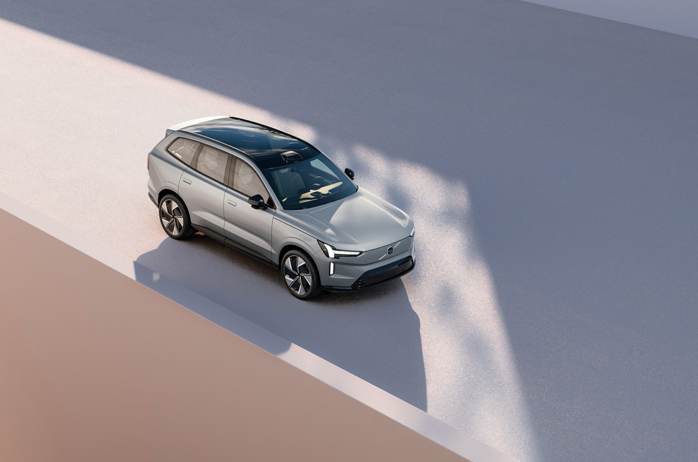 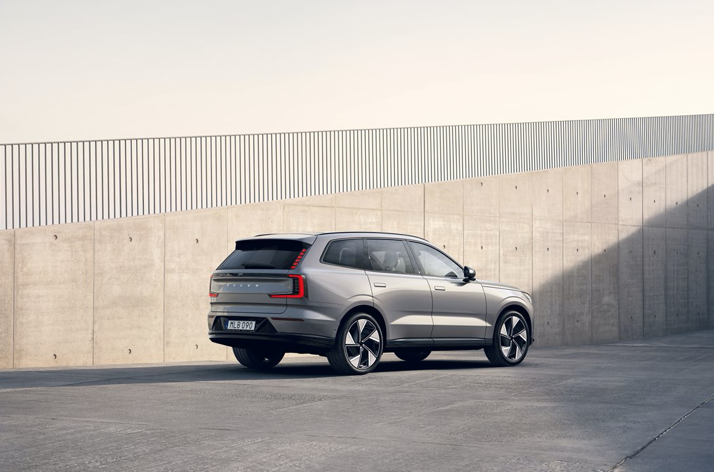 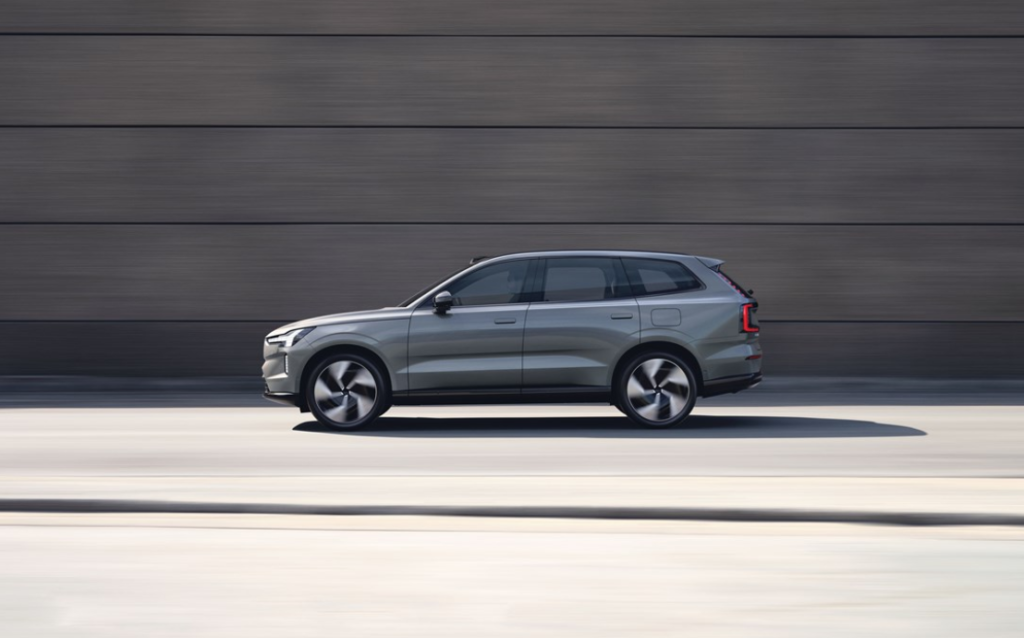